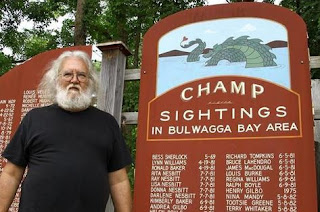 Fellow lake cryptid fan and researcher, Scott Mardis talks about cryptids as plesiosaurs on Monster X Radio. Scott is one of the leading experts on the monster of Lake Champlain, commonly known as Champ. He also runs the popular Facebook group, the Zombie Plesiosaur Society, which you can find here.

Go this link for the podcast.

Monster X Radio: Animal Extant is a show about general cryptozoology and possible relict extant species that may still roam among us. Hosted by Mike Richburg and Dorraine Fisher, each episode will explore the possibility of the existence of mysterious unknown creatures and those perhaps thought lost to time. Future episodes will focus on the Mokele Mbembe, The Dogman, Lake Monsters, Megalodon, Giant Birds, Large Melanistic Cats, The Jersey Devil, The Chupacabra, and many more.

Scott Mardis has been an active field investigator of the Lake Champlain “Monster” since 1992. He is a former sustaining member of the defunct International Society of Cryptozoology and a former volunteer worker in the Vertebrate Paleontology Dept. of the Philadelphia Academy of Natural Sciences (1990-1992). He co-authored a scientific abstract about the Lake Champlain hydrophone sounds for the Acoustical Society of America in 2010. He currently lives in Bradenton, Florida.

Mike Richburg was born and raised in South Carolina, where he had an encounter with a Swamp Ape in 1978 that had a profound impact on the course of his life. Mike has since been very involved with Cryptozoological Field Investigation, interviewing eyewitnesses and investigating such things as The Lizard Man of Scape Ore Swamp, The Fort Motte Devil, The Dogman, Bigfoot, Lake Monsters, The Rimini Goat Thief, Giant Birds and Snakes, just to name a few. Mike is very much at home in the swamps of the American Southeast, and frequents places few others would. Mike previously was a part of The Big Thicket Watch, and CryptoLogic Radio.

Dorraine Fisher lives in Florida. She is an author, photographer, and team writer and associate for the research group, The Crypto Crew, who's written numerous articles on the subject of cryptozoology.