Yet Another Old Nessie Book

I maintain a list of books that fully or partially address the subject of the Loch Ness Monster and, though I am aware of most of these publications going back to 1934, some new ones do occasionally turn up on the online second hand book market. So, another turned up recently, and being the collector of Nessie memorabilia that I am, I put in an order for it. It is called "Bigfoot and Nessie - Two Mysterious Monsters" by Angelo Resciniti and Duane Damon, as you can see from the cover below. 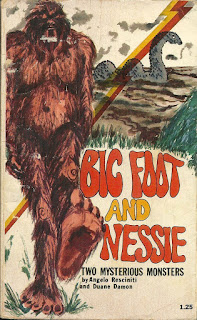 It is a 125 page book split between the two great cryptids of our time, with Duane Damon authoring the Nessie portion. Now this is another of those "boilerplate" books that appeared in the 1970s with the aim of cashing in on the Nessie fervour of that decade fuelled by the Rines underwater photos. With a recent poll stating that 20% of Scots believe Nessie is a "real life beast" (though that covers a wide range of animals), one wonders what a similar poll would have said in 1979? Given the flood of such books, one would imagine a lot higher than today.

But the book does not really add anything to the mystery, rather regurgitating the facts and figures of the time, most likely culled from other books. However, it's a fairly accurate book, but it did raise a couple of observations as I read it through.

The first was its quote from the Time magazine from 1942 stating that a 24 foot basking shark carcass had been found on the shores of Loch Ness, thus solving the mystery of the loch. I have seen this before and am certain it is an inaccurate statement. No such carcass is mentioned in the Loch Ness literature and it seems it is actually referring to a carcass found at Gourock, on the Firth of Clyde in the summer of 1942.

The second question that arose in my mind was the Academy of Applied Science expeditions of the 1970s. Damon tells us how the New York Times paid the Academy $20,000 to have the exclusive rights to any discoveries during their 1976 expedition. Nothing turned up and nothing again in 1977. The 1978 expedition is mentioned as taking a few indistinct underwater pictures of the beast. That seems like news to me, does anyone know about these?

Finally, there was 1979 and the abortive dolphin project. That raised a final question. When did the Academy of Applied Sciences make their final trip to Loch Ness? Was it 1978, 1979 or later?

All in all, another addition to the Nessie book collection. 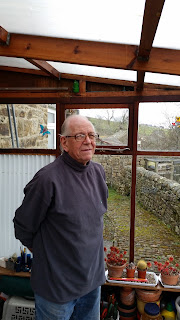 I was driving back to Scotland last month up the M6 and had arranged to meet up with long time Nessie researcher, Rip Hepple, who lives in the north Pennines. It was a meeting that was long overdue as I had previously met Rip by the shores of Loch Ness over thirty years ago when I was a student! Back then, he used to take his caravan and family up to the loch and park it down a little slip road to a pier near Abriachan (as a reminder of those times, Rip showed me a large nut and bolt from that spot).

It was a different setting this time as we met at his home about 30 miles south west of Newcastle but very much set amongst the high hills of Northern England. I had considered talking to Rip by way of an interview for this blog, but we spent two hours in a good old fashioned talk about monsters and men. As you can see from the photo above, he is looking well for a man approaching eighty. He looked a lot younger to me.

Rip was one of the main men who played their part in the Loch Ness Investigation Bureau which ran operations from 1962 to 1972. Rip talked about the ups and downs of those days culminating in the demise of the organisation due to the need to move from their Achnahannet site but with no fixed abode to turn to.

Actually, it could have turned out better, Rip explained, but due to circumstances the venture came to an end. Did any good come out of this? Well, we got Rip Hepple's newsletter, still going after forty years. Rip handed me my latest copy and you can subscribe by following the details at the end of this article.

But, to me, the demise of the LNIB seemed all too premature. After all, the Loch Ness Monster was about to enter one of its most manic periods in the 1970s due to the 1972 and 1975 underwater photos. In that climate, there was surely room for the continued existence of a focal point for the mystery. I say this in the light of the fact that the two main exhibition centres in Drumnadrochit had not yet been set up.

Perhaps it was the lack of conclusive evidence from surface watches that precipitated this or the notion that people like the Academy of Applied Sciences were going to solve this mystery once and for all. Whatever the reasons, that lack of evidence between 1962 and 1972 was an odd period to me since nothing great came out of that period from anyone!

Think about it, we had the classic photos from 1933 to 1960 and then it all dries up for at least a decade. No photo resembling a Gray, Wilson, Cockrell or O'Connor is to be seen. Surely the so called hoaxers had even more incentive to crank up the fakes during this time of increased monster awareness? Had the so called fakers forgotten how to fake or are there other reasons for this famine of photos?

When the conversation turned to the old girl herself, Rip was still of the mind that there was something big and mysterious under those dark, brooding waters. In fact, the giant eel theory was his favourite and I can see where he is coming from with that one. Obviously, it has its problems like all other theories (and that includes sceptical ones), but it is one of the more popular solutions to this enduring mystery. I was glad Rip still took this view as one sees old LNIB people going over to the other side of the debate.

Rip no longers goes to Loch Ness and perhaps his chance to see the creature is now gone. It is now down to the next generation of monster hunters to take up the cause of Rip and others and continue the search for the Loch Ness Monster.

Issue number 165 of Rip's Loch Ness newsletter has just been published. It can be obtained by writing to the address below with a subscription payment of £5 for twelve issues published at irregular intervals. A large portion of Rip's newsletters have been archived online and you can find further details here.