One of the Silliest Nessie Theories 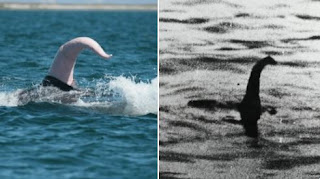 I was recently contacted by Sean Murphy from the Scottish newspaper, the Daily Record, regarding a "novel" theory about what the Loch Ness Monster may be. Was it giant eels or some new variant of the plesiosaur or something new to excite debate and discussion? Well, if you think whale penises can generate discussion, you have your answer. The article from the paper says:

A recent article by Snopes.com looked at one of the strangest theories over what Nessie could be.

Over the years, sightings and photographs of the Loch Ness Monster have been attributed to everything from toy submarines and floating logs to giant eels or even a surviving prehistoric plesiosaur. However, one of the latest theories to emerge on the internet might be the most bizarre one yet, even prompting the fact-checking website Snopes.com to investigate in a bid to clear things up.

A post on the popular site headlined "Is the Loch Ness Monster Just a Whale Penis?", added that the strange online theory is "more plausible than it might appear". Focusing on the famous Surgeon's photograph, reportedly taken by surgeon Robert Kenneth Wilson in the 1930s, the theory, which appeared online earlier this year, compares the pic with another one taken of a similarly shaped whale penis rising from the water.

The bizarre theory is based on a study by a team of researchers, which was published in a paper in the Archives of Natural History and speculated that many accounts of large mysterious sea creatures with a “serpent-like tail” were actually a large baleen whale and its “snake-like penis”. They added that other accounts could be attributed to the male members of certain whale species which can be at least 1.8 metres long and are sometimes spotted rising from the water during mating.

However, Snopes stated that the famous photo of Nessie couldn't be, as it was a confirmed hoax, but added that it's possible that other sea serpent and Nessie sightings throughout history may have been misidentified whale penises. The team at Snopes summarised: "While the famous picture of the Loch Ness Monster certainly wasn’t a case of mistaken whale-penis identity, and while whale-penis sightings probably can’t explain every sea serpent sighting throughout history, it is plausible that some of these 'sea serpents' were attached to the bottom of a whale."

Considering the fact that Loch Ness is technically landlocked, fresh water and the biggest mammals regularly spotted there are seals, it seems the whale theory cannot be applied to Nessie. Famous Nessie Hunter Steve Feltham is happy to rule out the theory that whales could have been mistaken for the famous Scottish monster, he said: "I have lived on the shoreline of Loch Ness for over 30 years, watching and waiting for for a glimpse of one of the animals that are reported to live in here.

"I have never seen a whale in Loch Ness, and one hundred percent believe that I never will.

"One thing that I can do after all these years of investigation is cross whales off the list of possible explanations."

While author Roland Watson, who runs the Loch Ness Mystery blog, added that even if whales did make an appearance in Loch Ness then long necks emerging from the water would only be seen during the whale mating season, however, sightings of long necks are reported all year round.

Now it is apparent that this theory was originally suggested for cases of sea serpent sightings and we could give some credence to that, but inevitably it got linked with Nessie. One could give various answers to this. Steve Feltham gave the straight answer, there are no whales in Loch Ness. It has to be said that some such as Roy Mackal and the recent book by Ken Gerhard have suggested ancient whales as a candidate for the monster, but I am sure they did not have this in mind when they formulated those ideas.

If there was a whale in Loch Ness, we would soon know about it as it blew water into the air and generally splashed about. The recent story of the young Minke Whale which got quite far up the River Thames in London shows that they can travel quite far inland, but to their detriment. Getting through the tighter, shallower River Ness is a different proposition to the huge Thames.

That would settle it, but I added my own geeky kind of answer that long neck sightings are reported all year round, whereas this genital spectacle would be confined to the mating season for whales, which I understand is confined to the colder months of the year, but involves long scale migration to the equator.

So, yes, it is a silly theory which is entirely false and not "mostly false" and we can ignore it. But I know some of you will be asking the question, perhaps it is the male organ of the Loch Ness Monster? Well, that all really depends on what the Loch Ness Monster is, doesn't it? But I somehow doubt that this organ can reach the dimensions we require if it belongs to a thirty foot creature.

What more can one say?