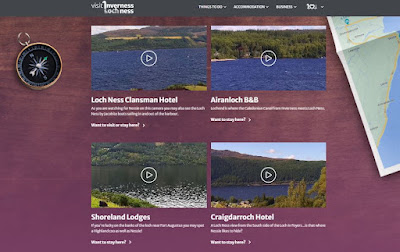 This week saw the arrival of a welcome facility at Loch Ness - better web cameras. In fact, five have been installed at various points around the loch to enhance the remote Nessie hunting experience. As you can see from the screen grab of the Visit Inverness and Loch Ness website, these are located at the sites of private businesses. These are listed below with their corresponding numbers on the map giving their locations and an idea of loch coverage. 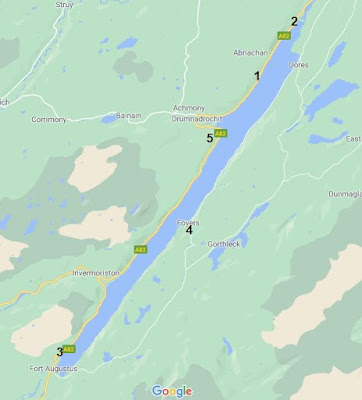 So, most of the cameras are on the busier north side of the loch, but this is likely in proportion to the number of commercial enterprises around the loch. However, as you can see, they are all nicely spread out to give different views of the loch surface. The webcams can be accessed at this link and this is where we go next to try each one out.

As each selection was clicked into live stream mode, the quality of the video was of good quality. Each can be expanded into what looks like full screen 16:9 and the square 4:3 aspect ratios. A zoom button moves in on the centre by a factor of 1.50 for a closer look. I assume this was a digital rather than an optical zoom. A click of the camera icon downloads an instant snapshot of the scene you are looking at in 4:3 format complete with date and time stamp. There is no option to record what you see or rewind or fast forward, but one could install an appropriate application to record the screen.

Most of them had a panning motion enabled apart from the Shoreland Lodges camera. All panned right to left but to varying degrees. Some would pan until 20% to 40% of the previous view was out before they reversed the pan. Some would pan with a greater sweep until a complete new view was seen. This has its pros and cons. The main pro is that more of the loch is under surveillance in a wider sweep and so more chance of seeing something of interest.

The reverse of this is that if you do see something, it may pan out of view before you get the snapshots you want. Given the rarity of seeing the monster surface before you on a live stream, I think I prefer the panning option to see as much of the loch as possible. The distance from camera to loch also varied as two were over 500 metres from the shoreline but the others were very close.

But all told, it is a great scheme that is up and running and I think my two favourites are the Clansman and Shoreland. The question is whether they will deliver game changing images? I think if the monster surfaces close to the shore nearest to some of these cameras, we will get some very interesting images that will not be so easily dismissed as the webcam fare we have been subject to in recent years.

Obviously as an object surfaces further away from the webcam, the more uncertain the image. So snapshots of objects on the other side of the loch from any webcam should be treated with the same caution as before. Likewise, new images such as unfamiliar water patterns, passing branches and logs will get undue attention, but it should be no trouble to identify them as such.

However, it is the opportunity now to see objects much closer than before that open up possible new opportunities. So congratulations to those who put in the effort and money to get these projects going. Webcam users may now switch to the new webcams. With tongue slightly in cheek, perhaps each should sit a test to identify common objects and repeat to themselves daily, I will not pass off any old rubbish just to get my name in social media. I suggest a compilation of everyday objects be collected from the webcams over the year ahead and are published as a guide on the Visit Inverness Loch Ness website!

And now for that appeal. A film maker I know is producing a documentary on the Loch Ness Monster and its Hunters. He has asked if anyone knows of any film footage taken by tourists or locals of the loch from the 1960s to the early 1980s. This is just general footage of the loch and its surroundings, not anything to do with the monster. Email me at the address below if you have relevant information or leave a comment.