I thought I would make some comments on a recent video purporting to show the Loch Ness Monster. It is a mobile phone recording of a webcam stream appearing to show a large dark shape moving along the waters of Urquhart Bay for quite a long time by monster standards. Gary Campbell's Loch Ness Monster Sightings website puts it thusly:


30 April 2018 - Eoin O'Faodhagain from Co Donegal took a ten minute video from the Loch Ness webcam at 1207 hours. The creature moves from right to left and there were no boats visible on the water when he first noticed it but as it swam towards Urquhart bay, two cruisers came down the middle of the loch from the north and it sank briefly then came up again, but seemed to be lower in the water than when it first appeared. As the cruisers got closer to the object, it sank completely and never came back up.

Of all history's greatest questions - who killed JFK? was the moon landing faked? who shot Phil Mitchell? - none is more mysterious than 'is the Loch Ness Monster real?'. Well a fan says he has an answer after filming the mythical beast frolicking about in the waters of the famous Loch for 10 minutes ... allegedly. Eoin O’Faodhagain was given a "terrific shock" after appearing to capture Nessie diving down before resurfacing. The clip has been accepted by the Official Loch Ness Monster Sightings Register, according to The Mirror.

“I couldn’t believe my eyes and started recording it on my phone. It was certainly something big. It dived down and up again and dived and disappeared. It was not a boat. I would say it was Nessie.”.

"As far as Nessie footage goes, this is a feature film. Normally you only get videos of one or two seconds. It is remarkable in its length. Clearly it is something that dives in and out of the surface with water splashes and reflections. The object would be no larger than 20ft.”

The news comes just days before DNA sampling on fragments of skin and scales collected from the loch in the Scottish Highlands.


Mr. O'Faodhagain clearly thinks he has captured the famous monster on his mobile phone camera and he certainly has an interesting video. The clip was recorded off the computer screen which was running the live stream from the popular Nessie webcam run by Mikko Takala. The camera is mounted on a roof on a hilltop overlooking the castle (which is out of view).

Based on the camera's position, the object in the clip is likely no closer than 450 meters away. Add to this the fact that the resolution of the live stream is only 360p (HD is at least 720p) then you can see why the image is fairly indistinct. A 1080p stream would be great for Nessie hunters, but that would cost more money and most of the Loch Ness money goes into the pockets of hotels, restaurants and exhibitions.

But we can say some things about the video. An estimate of the size of the dark object can be made by comparing it to a known object taken from the same webcam. So below is a snap of a cruise boat coming in from the right making its way to the castle. I am not sure what boat it is, so I will assume it is one of the rented cruise boats which come in at at least 30 feet. The boat and the object match nicely for proximity and so an overlay can be done to make a size estimate as shown below. Based on this, the screen grab of the object is about 10 feet long. However, other portions of the video show the object extending and decreasing in apparent size which could be partly down to reflection, though the video is too indistinct to separate solid object from light effects. 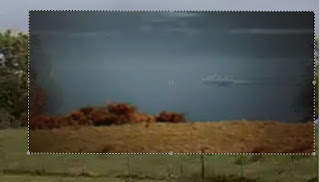 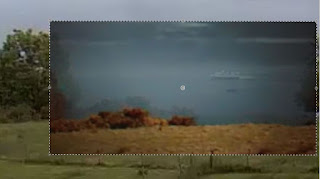 The object is also considerably slower than the boat I snapped, perhaps more than ten times slower. If this really was 10 feet of solid object, then that points to perhaps 30 feet of total object below the surface. The haziness of the object does open it up to other interpretations. Some will say it is a group of birds slowly swimming along or a log floating past or even a seal.

I would say, however, that the object does appear to submerge, no longer to appear in the video as a boat approaches. That would mitigate against birds for me, which should fly off rather than disappear under the water. Logs can indeed sink, but they are more likely just to be washed ashore since they can take weeks to saturate and sink. As for the ubiquitous Loch Ness Seal, I don't think they show ten feet out of the water.

In some ways, this is how I imagine the 1938 G.E.Taylor film to be, I say that never having seen it, but its apparent shape shifting is perhaps partly explained by what we see here in terms of reflections and water movement. Is this the Loch Ness Monster? It could well be, but let's exercise the other theories to see how well they stand up to scrutiny.