The Monster of Lago Di Garda 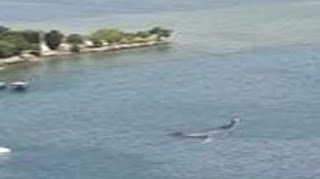 A recent photograph has circulated on social media purporting to be the legendary beast of Lake Garda in Italy. Now this is a cryptid tale I am not familiar with but I had a look into it for this piece. The actual posts on the picture were in Italian and so a translation was required. From the Italian:

Ho fatto delle elaborazioni della immagine del lago di Garda . immagine piu chiara e definita. SI vedono le pinne sotto il pelo dell'acqua i sole che si riflette su parte della testa e sulla parte del corpo esposta al sole (macchie bianche). Per la lunghezza se qualcuno puo elaborarla avendo come punti di riferimento la barca, a occhio non piu di 5/8 metri. Lascio a voi un giudizio.
We get this through Google Translate:
Hello everyone Made this photo in Manerba on Lake Garda this summer! Try to open the photo Maybe I'm just seeing something strange or you too?
I did some elaborations of the image of Lake Garda. clearer and more defined image. You can see the fins under the surface of the water the sun reflecting on part of the head and on the part of the body exposed to the sun (white spots). For the length if someone can process it having as reference points the boat, to the eye no more than 5/8 meters. I leave a judgment to you.
I know, it is a bit terse when you use Google Translate, but we get the gist of the text and that the poster is the taker of the image. His brief post suggests he was no aware of anything in the picture until he examined it more closely. Here is the wider photograph of the lake with the object of interest to the bottom left. After this is a processed image by the owner, whose identity we do not know yet as it has been edited out. 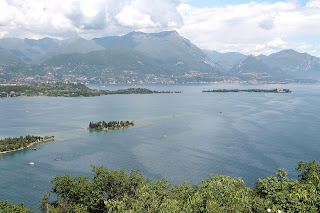 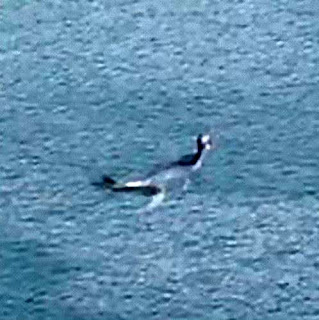 As a digression, Lago Di Garda does indeed have a monster tradition as this text from a tour cruise website summarizes:
Aside from many historical legends about the towns surrounding its shores, with its castles, kings, princesses, princes, and battles, Lake Garda also has a myth about a creature that inhabits its abyss. According to some, inside Lake Garda there may be a prehistoric monster called Bennie, that may even be related to the well-known Nessie, the monster of Loch Ness, in Scotland.
The hypothetical presence of a beast of colossal size in the placid waters of Lake Garda has ancient roots. Since the middle ages there have been sightings of sea monsters that terrified fishermen, local inhabitants, and monks of the monastery on Garda Island. But the legend of the monster of Lake Garda began in the 20th century. The most renowned sighting dates back to the 17th of August 1965 near Mermaid Bay (Baia delle Sirene) on the eastern coast of the lake, not far from the town of Garda.
It was here that a group of about 10 tourists claims to have seen a huge 10 metre long sea creature with a shape similar to a snake rise from the water, and then plunge back into the underwater caves of Garda Island, where it may live shrouded in darkness. The event was reported by many national newspapers and immediately became one of the most intriguing mysteries of Lake Garda.
Garda isn’t the only Italian lake to have its own monster. Even Lake Como has its own legend that talks about a monster roaming its waters called Lariosauro (Lariosaurus). The presence of fish monsters has become one of the main Garda related news in the past few years.
Over the decades, the sightings became more and more frequent, especially from the year 2000 forward. There are about 15 sightings or so, and the “monster” of Garda Lake earned the nickname “Bennie”, in honour of Lake Garda’s ancient name: Benaco. In 2001 a diver claims to have seen Bennie near Gargnano, a later sighting was reported by a hotel owner in the area of Manerba, and in 2013, once again in the area of Mermaid Bay, which seems to be the most mysterious part of the lake, a family claims to have seen a creature over 15 metres in height, with the scary mixed appearance of a snake and a whale.
The last sightings of the Lake Garda monster date back to 2016 and 2018, and Bennie’s international fame has in recent years brought to the origin of many lake tours dedicated to him, as well as many souvenirs and gadgets.
Bennie, named like this by Armando Bellelli, native to Desenzano and expert in mystery stories, is considered to be a “good” monster who has never attacked anyone, and is, in the collective imagination of the locals, depicted as a good fellow, a timid guardian of the lake, who protects it from pollution and excessive exploitation from men.
The mystery of Bennie and its presence in Lake Garda has aroused great interest not only among those passionate about mysteries and legends, but also among the media, like in the TV show “Mistero” (Mystery), on air on Italia Uno, and scientists, like biologist Jeremy Wade, director of the BBC show dedicated to mysterious sea creatures called “River Monsters”.
During an episode dedicated to Lake Garda, that went on air in August 2019, Jeremy Wade has actually caught a giant torpedo catfish over 120kg in weight and 2m in length, but this doesn’t seem enough to describe the mystery of the Garda Lake Monster.
It is in fact believed that in recent years the number of catfish in Lake Garda has been on the rise, with the fishing of some specimen around 80kg in weight, but sightings of the innocuous Bennie continue. To go “hunt” Bennie there have been explorative missions with robots and sonars to scan the depths of the lake, but the mystery, just like with Loch Ness, has yet to be resolved...
Lake Garda itself is located in the North of Italy, about 100 km east of Milan and a similar distance to the west where the sea is. It is about 44 km long and varies between 2 and 10 km wide, so it is of a similar size to Loch Ness. So it has a monster tradition and of a size big enough to harbour one. But what about the photograph? A YouTube reference to the picture was dated to September 2017, so it is over four years old. A quick look at Lake Garda and comparing the picture with satellite coastline gives the location of the picture and confirming it as near the town of Manerba. 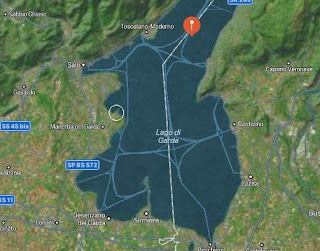 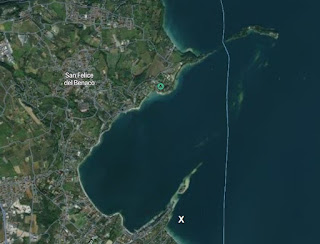 Not that this tells us nothing about the genuineness of the photograph. The poster refers to the white boat to the left of the object and I would guess is at least 15 foot long, making the object at least twice as long at thirty feet long - a typical Nessie length. However, that would make the boat a mere sixty feet from the object, which naturally raises the question - did the boat occupants see this object?

The boat is moving away from the object, if it is moving at all as I cannot see any wake. I see no one on board but that is a hunch. I get the impression it is shallow water, but again this is something I cannot be dogmatic on. There is also a pier to the left at a similar distance with buildings and there are other boats further out - how did no one see this and get some superb pictures? To a lesser extent, why did he not see it at the time?
Which brings us to the main point. It is easy to produce such a picture using image manipulation software - as we saw with the recent so called drone footage of Nessie. In fact, the ease of production and the ready availability of people ready to hoax has made many take the default position that any such picture will be a hoax until proven otherwise. It's really a case of guilty until proven innocent in the world of cryptid images and proving your "innocence" is no easy matter.
So the first task is to find a plesiosaur image of similar posture on the Internet which may have been overlaid into the original photograph or find the original photograph minus a monster. On my own searches of the first few hundred plesiosaur images on Google, I saw nothing which matched well and a look at tourist pictures of the bay did not show up the bay with the same boat in position but with no "Bennie".
Of course, my search was not exhaustive and the bay photo may have been a picture taken by the poster but I invite others to have a look around. So, as I said, it is guilty until proven innocent these days and time must be allowed to make progress on finding the two incriminating pictures I mentioned before further comments are made.
The author can be contacted at lochnesskelpie@gmail.com
Posted by Glasgow Boy at 13:23