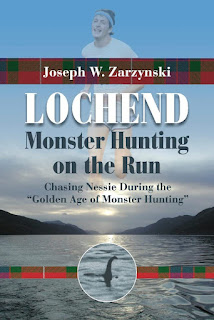 I am pleased to say that Joe Zarzynski, as one of the monster hunters active from the 1970s, has decided to put pen to paper (or fingers to keyboard) and write down his memories and thoughts on his life searching for Nessie back in the day when all the famous monster hunters such as Dinsdale, Rines, Mackal, Holiday and so on were still active at the loch pursuing their common quarry. His personal timeline began 1974 to 1991 and it should be an interesting read from an interesting period which Joe Zarzynski called the "Golden Age of Monster Hunting". I wouldn't especially argue with that statement (though others may think the 1960s edge it).

Joe was not as well known as the Dinsdales and Rines of the Nessie world, but he has a story to tell and was a seasoned cryptozoologist in his own right having focused his main attention on the monster of Lake Champlain or Champ and written on that subject extensively in "Champ - Beyond the Legend". I had written some years back on Joe's other Loch Ness related book on underwater wrecks. This combined his love of aquatic cryptids and searching for sunken ships. The promotion for this new book reads thus:

Cryptozoologist-turned-maritime-archaeologist Joseph W. Zarzynski's new book LOCHEND -- MONSTER HUNTING ON THE RUN is about the golden age of monster hunting at Loch Ness, Scotland. The Saratoga County, New York author chronicles the late 1960s, 1970s, and 1980s, when sophisticated technology was first employed trying to solve the Nessie enigma. That specialized equipment was developed because Cold War tensions necessitated advanced remote sensing to probe the deepest oceans.
Since April 1933, when Aldie and John Mackay, Drumnadrochit, Scotland residents, sighted a strange creature splashing about on the surface of the 22 ½ mile-long Loch Ness, the world has been fascinated that the waterway might be the habitat of a colony of large unidentified animals. Soon afterwards, expeditions were organized to the Scottish Highlands trying to solve the world's most challenging zoological puzzle.
Beginning in the 1960s, more advanced scientific equipment was brought to the deep waterway hoping that state-of-the-art electronics and optics might decipher the scientific mystery. In the 1970s, some of the best scientists in the world traveled to the legendary loch with teams of scuba divers, side scan sonar, customized underwater cameras, and other remote sensing apparatus. In a sense, well-publicized Loch Ness became a testing ground for some of this cutting-edge underwater technology.
The 200-page book, with over 90 photographs and illustrations, likewise tells the story of a little-known athletic accomplishment at Loch Ness. In 1984, Joseph W. Zarzynski, a self-described "average" marathoner and ultramarathoner, completed a 28.5-mile solo run along the loch. He may have been the first person to have run the full length of fabled Loch Ness. The author uses his overland jaunt to tell anecdotes about the heyday of pursuing the elusive Nessie animals.
Included in the book are also stories about other Loch Ness mysteries. These include: an ancient artificial island called a crannog, a hill where local lore has it that a dragon is buried there, possible monster hoaxes perpetrated at the waterway, a reputed 1934 sighting of a Nessie monster crossing a shoreside road, strange stone circles found on the waterway's bottomlands, a full-scale movie monster prop that sank in the loch, a giant fiberglass net sunk in the loch to snare a beastie, and a rare World War II bomber discovered during a Loch Ness monster search. Moreover, Zarzynski provides a primer into other denizens of the deep known by these nicknames―Morag (Loch Morar, Scotland), Seileag (Loch Shiel, Scotland), and Champ (Lake Champlain, New York, Vermont, and Quebec).
From 1974–1991, Joseph W. Zarzynski conducted numerous cryptozoological expeditions at Loch Ness, Scotland and at "North America's Loch Ness"―Lake Champlain. Readers will enjoy this real-life adventure set during the high watermark of seeking Nessie.
I have one photo of Joe from that period (courtesy of Tony Healey) pictured on the right with the man himself, Tim Dinsdale. Doubtless we will see more photos of interest in Joe's book. 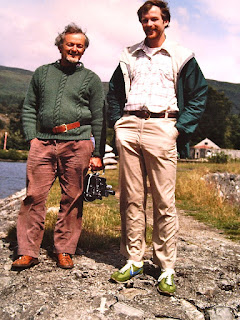 Joe's "Lochend - Monster Hunting on the Run" will be published on December 13th just in time to end up in your Christmas stockings. I will bypass Santa and pre-order it now. It is available to order at amazon.com and amazon.co.uk.
The author can be contacted at lochnesskelpie@gmail.com
Posted by Glasgow Boy at 13:58