Time to talk about Loch Ness Monster research the good old fashioned way. I don't mean dragging huge ham joints by hook in a boat or sweeping wartime searchlights across the loch, but rather the mundane trawling of the archives for information. One of my favourite venues for this has been the National Library of Scotland in Edinburgh. It is one of Britain's largest libraries, housing over 24 million items such as books, newspapers, photographs, films and manuscripts going back centuries and with the emphasis on Scottish culture. A perfect place for Loch Ness Monster research.

When I started researching my first book, "The Water Horses of Loch Ness", ten years ago, it was not all about online or digitized resources. Since the book was concerned with Scottish monster folklore, I was busy reserving and consulting books from the 18th and 19th century right up to but before the Nessie era of 1933. Sometimes white cotton gloves were required to handle the rarer and more delicate books. A lot of fact checking went on, such as verifying a claim made to the Loch Ness Investigation Bureau decades ago that Daniel Defoe mentioned two "leviathans" seen in Loch Ness by General Wade's road builders in a certain edition of his book "A Tour through the Whole Island of Great Britain" undertaken in 1724. It was fun handling those ancient books with their weird fonts and ye olde English.

Part of that research was scanning through old Scottish and Highland newspapers. Now newspapers over a hundred years old are generally not available due to their fragile nature. After all, they were originally intended to be read and discarded after a few days. To preserve the originals, they were photographed page by page and transferred to rolls of microfilm. Many were the days I plugged a roll of film into the microfilm reader and flick through the image of the pages projected onto the screen, not just for that book research, but for retrieving information on old sightings, expeditions and personalities.

Now you might think online websites such as the British Newspaper Archive has made those microfilm readers obsolete, but this is not the case. For example, its online archive does not hold any Inverness Courier copies after 1909, twenty four years before Nessie reports began to flood in. Likewise, nothing from the Northern Chronicle after 1914. Such local newspapers carry monster reports not seen anywhere else. Having said that, titles and years are being added all the time and it has to be admitted that finding keywords such as "Loch Ness Monster" is much harder with microfilm than typing a search term into a website.

But a day is coming when the local researcher will have little advantage over the global researcher as Google continues to digitises millions of books and all old newspapers go online. Until that day comes, I will continue to visit the vast collection that is the National Library of Scotland, and so it was as I was there last Thursday. I had reserved some items (not all Loch Ness related) and took my seat here. One book was reserved because it cost about £170 to buy and I wasn't going to shell out that much! The other was a book from 1642 that I wished to peruse as well.

Then it was onto the microfilm rolls, one for a bit of family research and the other Loch Ness related. That was the Inverness Courier for the last half of 1973 as I was researching a new article. Even though I had one item in mind, I like to scan on and see what else was going on at that time. I found a couple of references to the upcoming Japanese Expedition of that time, which were of slight interest as they did not cover the actual event. In fact, I only found one sighting recorded for that time period which is shown at the top. In terms of microfilm to blog, this involves printing the article, scanning it onto my laptop when I get home and then running this image through an OCR application and finally correcting any mistakes in that process to give you the text below.

I must also add that since my last visit, the library had replaced the old microfilm readers with new digitised ones. You set up the film roll in the spindles as usual but the current page is now scanned digitally and then displayed on a computer monitor. Did this make microfilm research easier? No, it made it worse! If you know exactly what you are looking for then it is probably great, but if you do not it is a royal pain.

I say that because when I search chronologically through the newspaper pages, I can quickly scroll past unwanted pages (such as adverts or sports pages). In a straight forward bulb projection, the pages scroll past you on the screen. With the new fangled version, you have to click the "forward" button with your mouse and the longer you press the button, the more it advances. However, you do not see the film scroll past you, the monitor goes black until you let go of the mouse button which means you have no idea how far you have advanced until the program spends 4 to 5 seconds scanning in the film below and then displaying it.

I eventually gave up on the mouse and just rotated the spindle with my fingers using the actual microfilm transparencies as a guide.This made scroll through take two to three times longer. I hope they put back at least one old analogue device for good old fashioned researchers like myself. But back to the monster report.

Sightings of the Loch Ness Monster this Summer have been few and far between, but news has just come that it was watched by a number of guests at Foyers Hotel two weeks ago. It was after 9 o'clock in the evening that the sighting occurred when several guests were walking. in the hotel grounds which, like the hotel itself, occupy a commanding stance overlooking the loch. There were two humps, each separated by a space of water several feet apart, and the guests thought the total length of the two humps was 20 feet, and of a dark colour.

The humps appeared fairly close inshore and not far from the spot where work is going on at the North of Scotland Hydro Electric Board's pump-storage "rig" is situated at the Loch-side. The humps then moved away towards the opposite side of the loch in a diagonal line, and the crossing to the far side took the best part of seven minutes. The guests were astounded, and later spoke of their experience to the hotel manager.

Unfortunately, a party of senior pupils from a well-known school at Leamington Spa, who were in the hotel at the time for coffee, were unaware of what was happening on the loch's surface, for it is the third year in succession that a party from the school has spent part of  the vacation at Loch Ness-side, in the hope of seeing the Monster.

Some more good old fashioned research followed as I looked at the sightings database I consult which showed three sightings for 1973. The more extensive list compiled by Ulrich Magin which is less fastidious and precise gives twelve sightings. This reduces to ten if we discount the two reported sightings by Frank Searle. By cross referencing with Nicholas Witchell's "The Loch Ness Story" (1975 edition p.71), our unnamed witnesses turn out to be a party of five including a Mr. J. Shaw and a Mr. E. Moran from Yorkshire.

As the article states, I can concur that the location offers a commanding view of the loch as this picture I took below in 2017 shows. I suspect many a monster hunter has scanned the loch for hints of the monster from here. However, the counter to commanding views is the longer distances and so any normal photo taken from this location will likely produce an interesting image but no game changer. 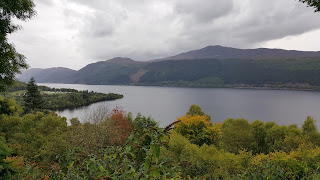 It is a two humper and its diagonal progress across the loch clearly excludes such phenomena as wakes and waves. Also, boats do not tend to follow each other less than twenty feet apart. Since the object was seen close inshore and the loch is about a mile wide, if we assume a 45 degree diagonal swim to the opposite side in seven minutes, this gives us a rough speed of twelve miles per hour which is faster than the usual outboard motor boats.

Interestingly, there was another sighting about eight hours before by the Pugh family up the top of the loch opposite Tor Point on the A82 detailed in Rip Hepple's Nessletter No.2. They observed what they thought was a smooth, blackish-brown sandbank 100 yards out and 4-6 foot long which later disappeared. Later they realised Loch Ness has no tides and it was likely they had been watching a low lying hump. Could these have been the same creature? Of course, one may say no because one is two humps and the other is a single hump. But as we know, our cryptid is a bit of a shape shifter when it comes to back contours. Ultimately, we shall never know and at this point.

One final word is for those senior pupils from the Leamington Spa High School who missed out on the sighting. As it turns out, we have met this group before in a previous article. They had been to the loch previously in 1971 and 1972 and produced a booklet on those trips (below). I did not know that they had returned in 1973 and as to what they may or may have not seen, I have no idea. 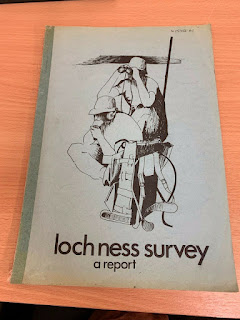 And with that I will wish readers a Merry Christmas.