Update on the 1981 Loch Morar Film 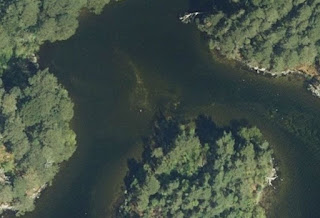 I will discuss the above image further down, but I just thought I would bring you up to date on the search for the footage taken of possibly one or more large, unknown animals at Loch Morar in the 1980s. The explorer, Sidney Wignall, led the expedition and a portion of the footage appeared on national UK TV before it disappeared from view for four decades. I wrote a blog on what we know of this film three years ago in this article.

After that, things went quiet before two events happened last year which convince me all or part of the footage is within reach, albeit with the usual obstacles. The first was a comment submitted to the aforementioned article from someone who claimed to be in possession of the original film. Naturally, this raised expectations and I got into an email conversation with them. The person said they had not looked at the film for a very long time and it was in a film canister somewhere in their house,. They would undertake a search, but they suspected it was hidden in a pile of canisters and identifying labels would have likely fallen off.

That initial communication came just days into the national coronavirus lockdown. I lost my job within a few months and I suspected my contact was not in a great place either. We all got rather distracted by more important events. I contacted them again in October 2020 but no success in finding it. Yes, I know, it is frustrating. I phoned the person again last week and they had found a box of VHS tapes and were hopeful of finding a taped copy. I await further developments.

Now, I know seasoned readers will sigh and suspect I am being led up the garden path. But I have checked the person's background and I am satisfied that their story is true. Unfortunately, that doesn't mean that something will just turn up after forty years of being forgotten about. If they finally find the film, the next issue is copy it to a digital medium. I am prepared to keep on waiting as that does not cost anything and the reward at the end may well be a fantastic piece of cryptid footage. But I can't even say that until I actually see it and assess it. After all, one Nessie expert described it as looking like the silhouette of a plesiosaur and another as looking like a log!

However, in one of those strange coincidences, I was contacted within days of that by another Nessie researcher who had located the news clip of the event. That person wishes to remain anonymous, but I want to thank him for his research in this matter. As it turns out, the Morar film was transmitted on the ITN national news on the 11th November 1981. The collection of ITN News programmes has been catalogued and made available for licensed use through the Getty Images corporation.

The entry for that news clip is clear enough as it describes the news report as opening with Sidney Wignall standing by his plane, then they're looking at a map, the item then changes to them flying over the loch and then the big moment as the "monster" is shown below in the water. This is then still framed followed by an artist's impression of what it might be. The whole sequence lasts perhaps three minutes, I do not know how much of that is "monster" footage.

Okay, great. I contacted Getty Images asking how I access this video. Firstly, I was told it was still in analogue format and had not been digitized. I guess they do these things on demand. I was then asked for what purposes I wanted it and how much of the news clip I wanted to license. This is where the journey began to go uphill. It was not a free item and there was money to be paid to allow its use. To be precise, £150 per second with a minimum of 10 seconds.

I swallowed hard and realised these people tend to deal with richer film and documentary makers who buy the rights to "rent" these clips for their own productions. However, I was advised that one could purchase a private preview of the item to determine whether I wished to proceed. That only cost £150, so I agreed to that.

The reply then came back that they could not even release the preview as part of the news item had third party copyright issues. In other words, the portion of the news report that contained Loch Morar film was third party and could not be release without their consent. Monster hunting was proving to be as elusive online as it was by the lochside. Sidney Wignall died some years back, so what does one do next?

After some consideration and communication, it may be the case that the person who has the original film is the copyright holder. So I went back to Getty Images and told them I had found the copyright holder, how do we proceed? To my surprise, they said they were still unable to provide the clip! That is a continuing conversation.

Anyway, the ITN news report would be great, but the real deal is the original film which has the complete sequence. A few seconds on ITN may not provide all the answers. We live in hope, but I move onto the image at the top of the article as I was informed that this may be another aerial image of Mhorag, the Loch Morar Monster. Another researcher, going by the pseudonym of Nunzio Byznez, contacted me some months back saying he had spotted Mhorag in satellite image of the loch. I zoom into the area of interest in the image. 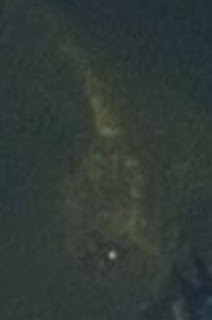 Well I think I may have accidentally solved the Wignall situation. I recently was searching satellite map from Apple maps of the same area where Wignall was over-flying. When I looked inside of a lagoon of the east coast of Ban Island (an island in north west Morar with other islands), a brownish silhouette appeared. It was in 16 feet of water (4.87m).Shallow water adjacent to deeper water. Its shape was odd. it had a long neck fat body but NO TAIL.
I could see no fins as it was a top down view and the creature may have been using them to stabilize itself in hover motionless stance to ambush passing salmon. The browser allowed me to measure it at 53 feet (16.1 m). Its neck was turned to the left as if it was looking astern.
The missing tail is assumed to be a case of "autotomy" which lizards go through when startled by an attacker. I can only think this may have happened in August 1969 when Duncan McDonell and William Simpson blasted it with their illegal shotgun. They where lory drivers on holiday supposedly fishing at 9PM and not poaching deer with that shotgun. Plesiosaur means "almost lizard". So I guess it dropped its tail when Simpson blasted it in its stern.
I have the photo but you can get it yourself from Apple maps. Roland or GB (I think) has another which is another shot of it from MapQuest. Its a little dark but you can see where it has small humps too. Adrian Shine says he has the 1969 article about Duncan McDonell and William Simpson incident and it says the creature was 60 feet long not 30 feet as some say today. So that makes my 53 feet sans tail believable. Adrian was in a Shiver video with Morar's Superintendent who has his own cellphone video of two of them just like Wignall said.

I admit it has that 1975 Rines/AAS picture look to it with that long neck and bulbous body so what do we make of this intriguing image? It is no photoshop job as you can go and view it yourself on the satellite images provided by the map facilities of Apple and DuckDuckGo. It is located on the southern part of the Eilean Ban island as circled below. 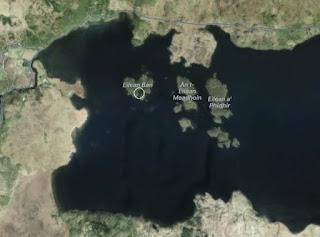 Well, the first thing to do was check other images from map providers. These images do get updated over time, but here is the one I took from google maps. It is a poorer quality image that the other one and there does not appear to be anything occupying the same stretch of water. Is that due to poor resolution of what? 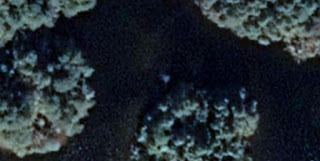 The next image comes from Microsoft Bing and is shown below. Now here we see that there is something similar looking in the same area. A zoom in of that area is included. 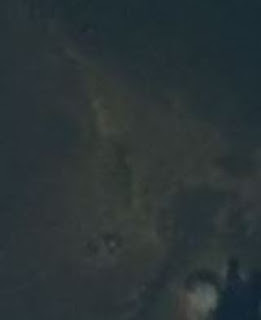 This crater-like image with raised edges would look to confirm that the object in view is part of the shallow loch bed between the small islands. I would guess that it is a sandbank and explains why there is no tail. The other argument is that if it was a living creature, one would not expect it to be in the same location taken by another satellite some time later, perhaps months or years. I am not sure how one would check that the two images are definitely separated in time.

Nunzio has the right of reply here if he has something more to say on the matter. But this image does make one think about the Wignall film which was also taken from above. If it was like this image, then some heated debates may ensue. However, I am persuaded better things of it, but the acid test will be the actual viewing of it, something which is proving to be a waiting game.