Analysis of the 1981 Loch Morar Film 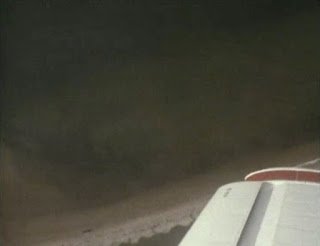 The last article gave readers an update on where I had got with finding the alleged film of a creature taken by the Sidney Wignall expedition to Loch Morar in 1981. However, after a few roadblocks, I managed to get a sight of the film that has aroused curiosity amongst cryptozoologists for some time. The clip I had access to lasts about two minutes and it does show the flyover of the object of interest.

Due to the ongoing issues of copyright and cost, it is not possible to show the clip in public, but I have some screenshots which I grabbed which can convey what is on the film. The first frame above gives us the context of the film, namely Sidney Wignall in his microlite spotting something in the water and homing in on it to get a closer view. We shall first discuss the actual location of the object as the next frame shows us the bay of interest with shallow sandbanks, a white sandy beach bordering it, a tree just right of centre and two streams feeding into the loch. 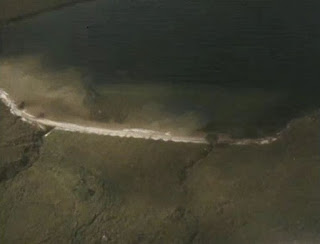 A perusal of the various search engine satellite maps homes us into the beach as it was photographed recently. The tree, streams, sandbanks are all pretty much there as they were back in 1981. The bay is called Camas Luinge and is located in the central southern coastline of the loch. This is circled in the map of the loch below. One of the rivers feeding in is the largest one of the loch, the River Meoble. One therefore wonders how good the trout and salmon are there. There is also another beast of legend here, the Grey Dog of Meoble as discussed by Mike Dash here. 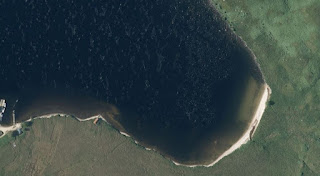 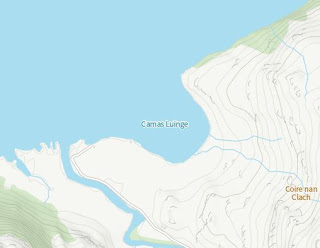 The area is not totally remote as it is accessed regularly by canoeists, bikers and hillwalkers as this photo of the bay below by one hiker suggests. Nevertheless, Loch Morar is a wilderness loch compared to Loch Ness and no major roads serve the south side of the loch. To get there you will have to expend some energy 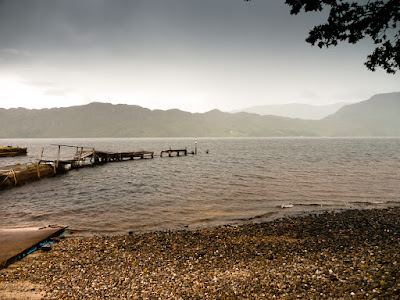 But back to Sidney Wignall. In the clip he takes us through the film, which starts with a scene of the microlite taking off from the surface of the loch, controlled by one of his expedition colleagues. The scene then switches to an odd looking thousand yard wake which Sidney speculated was created by one of the creatures. There is no boat in sight, but the sequence is a bit indistinct. We then came to the important part of the film. As his craft descended, our object of interest came faintly into view. Below, we show first the original image and then we circle the faint image of the object. 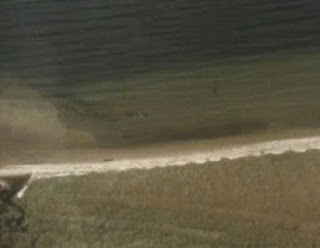 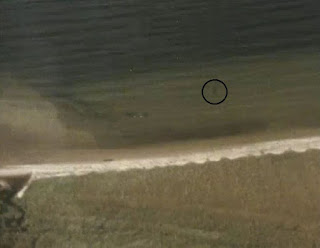 Then from a height of about 200 feet, the object comes into view and is shown below. Now when I saw this on the video clip, I immediately understood why one monster expert, Rip Hepple, said it looked like a plesiosaur but another one, Adrian Shine, said it looked like a log. This object, like many images of the Loch Ness Monster effortlessly lives in both worlds simultaneously. 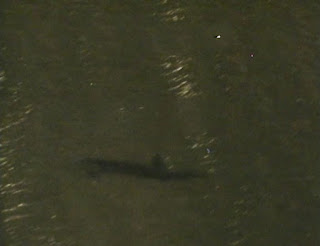 Actually, I was a bit disappointed when I saw the image. Having read Rip's words, I was half expecting a bulbous body, a long neck, long tail and flippers, or as he said "It was as close as anyone could wish, to being a silhouette of a plesiosaur.". One can see a creature of sorts under the water, perhaps a plesiosaur side on, but this is shallow water and one wonders if the object is in mid-water or merely lying on the sandbank and is partially buried in the sand?

The above image pretty much encapsulates the whole clip as I could not see the object move though the aspect of it changed as the microlite circled around it. Sidney pointed out what could be a flipper, long snout and a forked tail, though he would not explicitly state that this was the Loch Morar Monster and marked it as "unexplained". He did say that they had not seen anything unusual in the area on previous aerial surveys. He also estimated the length of the object to be about twenty five feet long.

Now I was under a bit of a misapprehension as I thought the film sequence would show two creatures. I based this on Sidney's own words from an article he wrote for the Pursuit magazine dated April-June 1982:

In late September, overflying Morar, we saw something very strange lying on the loch bed in about three meters of water in an area we had covered a few days before and which on the earlier occasion showed nothing unusual. The "thing" appeared to be about six meters in length and had what could be fins or paddles, but not the four I expected to see. (I was being subjective and not objective, hoping to see a plesiosaur.) A cine-record was made from heights of between 500 and 200 feet.
A low pass at 50 feet nearly put us into the water when we hit a "sink" area. Climbing away, I took several still monochrome photographs. Then I saw about 30 meters away from the "thing," another "thing." Only this time, Thing No. 2 was most definitely moving slowly, about a meter under the surface. I managed one 35mm still frame of it, then it descended into deeper water, out of sight. A polarizing filter had almost completely eliminated surface glare.
It could not counteract the small surface chop that distorted the resulting photographic image, which appeared to be of an object 7 to 8 meters long, moving to the northwest at possibly one or two knots. It appeared to have a neck and a tail but only two fins could be seen, and these were on either side just forward of amidships. I managed only one dive in the area after that, and in one bay I came across a log which did not appear to relate either to Thing No.1 or Thing No.2. What had I seen? I very much doubt if No.1 was an animate object. Its shape wasn't quite right. No.2 was the real thing, but what it is I cannot say, if a plesiosaur, why not four fins? If a zeuglodon, wasn't the neck too long?

So it appears that "Thing No.1" is our object in the still frame, but "Thing No.2" did not appear on the film. I did look close at the film for anything within 30 metres of "Thing No.1", but nothing is obvious to me. Perhaps it was in the deeper darker waters away from the highly reflective sand. So what exactly are we looking at here? Is it just a log or something else? The fact that Sidney himself is ambivalent and very much doubts it was an animate object perhaps sums up the matter. He says above that he did discover a log but thought it unrelated to the film. Does that imply he found nothing at the spot when he went there to investigate?

To complete the analysis, I zoomed into the bay today using the best satellite images I could find and noticed something perhaps worthy of further investigation. At roughly the same spot as the Wignall film in the sandbank I noted a sliver of darkness perhaps indicative of an object. The same image is reproduced circling the area of interest and then a different satellite image showing this blob. 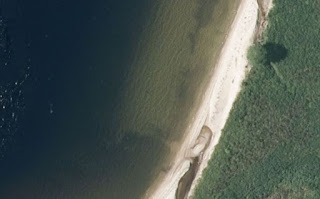 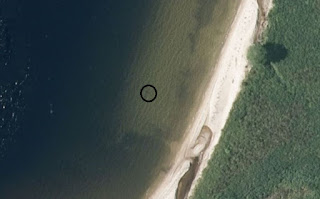 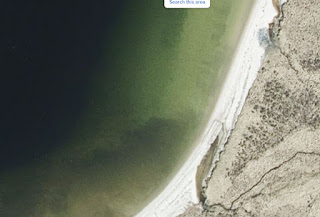 If it was a log, then could we expect it to still be there 40 years later? Only a visit to that spot with a drone camera or going in with waders could determine whether it is at all related to the object filmed back in 1981. In the meantime, I think we can close the case on this film and readers' opinions are invited. What now remains is to find this missing photograph of the mysterious second object. That may seem a daunting task, but I think I know where to begin looking. It will not be available online and I suspect it is held in the form of an old 35mm transparent colour slide. Wish me luck!
The author can be contacted at lochnesskelpie@gmail.com
Posted by Glasgow Boy at 14:05