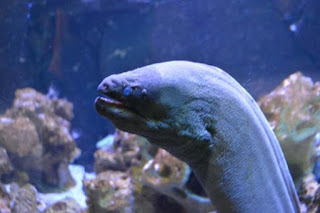 It is back to giant eels as I went through my research material and found a few stories of interest. Now I myself do not think the Loch Ness Monster is a giant eel, but that doesn't mean that opinion is false and various theories regarding the beast will continue to be blogged for the benefit of discussion. Of course, if a thirty foot eel is found at the loch, I would have to accept that the monster has been found and some explanation for the non-eel type sightings will be required. That has not happened and so we now continue with some letters from the Fortean Times magazine dated July 2006 (No.212). The first letter is from well known Fortean researcher, Mike Dash:

I was very interested to read Jim Currie's letter (FT208:74) concerning rumours that apparently circulated in Glasgow shipyards during the 1960s of an underwater sighting of the Loch Ness Monster. According to Currie, a story went around that a car had careered off the road and into the loch and that when a diver was sent into the water to search for it, he found the vehicle perched on a ledge 80ft (24m) down and surfaced babbling about "giant eels, the size of a man's body, hundreds of them!" In one version of the account, Currie adds, the diver's hair went white and he was rendered insane by the experience.

This tale, which while undated seems to refer to an incident occurring in the latter half of the 20th century, is readily identifiable as a variant on a supposedly much older account first published in the first edition of Nicholas Witchell's The Loch Ness Story (1974) p.29. "There is an interesting story," Witchell writes, "of a diver, Duncan MacDonald, who was sent to examine a sunken ship off the Fort Augustus entrance to the Caledonian Canal in 1880. MacDonald was lowered into the water and shortly afterwards the men on the surface received frantic signals from him to be pulled up.

When he did surface it is said his face was like chalk and he was trembling violently. It was several days before he would talk about the incident, but eventually he described how he had been examining the keel of the ship when he saw a large animal lying on the shelf of rock on which the wreck was lodged. 'It was a very odd looking beast,' he said, `like a huge frog.' He refused to dive in the loch again."

The first point to make is that Witchell's account of the MacDonald sighting is unreferenced and no primary source has ever been found for it (see Ulrich Magin, "Waves Without Wind and a Floating Island: Historical Accounts of the Loch Ness Monster" in Fortean Studies 7 (2001) p.102). Thus, if Mr Currie's memory of dates is correct, his apparently later version, involving cars and eels, may actually predate the MacDonald story. The second is that neither account is at all likely to be true.

Aside from the obviously folkloric elements featured in both tales (hair turning white, refusal to dive again), numerous underwater surveys of Loch Ness, conducted with sonar and echo sounder apparatus, have failed to reveal the various subsurface features so often featured in popular accounts: underwater ledges, caves and even tunnels leading to the sea. Finally, as is fairly well known, underwater visibility at Loch Ness is negligible - of the order of a few feet once one ventures to any depth below the surface - thanks to the heavy concentration of silt particles washed into the loch from the surrounding hills. The reported observations of Duncan MacDonald and of Jim Currie's diver would simply not have been physically possible.

That letter from issue 208 of Fortean Times is short and reproduced below:

When I worked in the Clyde shipyards in the 1960s, a story went round about Loch Ness. It was said a car had careered off the road into the loch and a diver was sent to investigate the insurance claim. Apparently the car had landed on a kind of ledge only about 80ft (24m) down. When the diver broke surface after investigating, he was heard to be babbling about "giant eels, the size of a man's body, hundreds of them!" In one version of the tale, the diver's hair turned white, while in another he became a babbling wreck confined to a lunatic asylum. Has anyone else heard this story?

First off, Mike compares this underwater encounter with the better known story of Duncan MacDonald from 1880 described in Nicholas Witchell's "The Loch Ness Story". Though it is described as a "variant", the two tales are undoubtedly unconnected. It is correct to say Witchell's tale is unreferenced and it is my opinion, it was one of those stories related by locals to the Loch Ness Investigation Bureau team in their years at the loch during the 1960s and 1970s. The local was probably known to Witchell but requested anonymity.

At this point we can also include the stories of Robert Badger (link), James Honeyman (link) and an unnamed diver (link). So you can see we have a growing line of such stories. Now as to folkloric elements,  if Robert Badger in 1971 said he would never dive in the loch again, that would be understandable, not folkloric. We can quite readily assume it for any other diver after such an event. What is not clear is whether they vowed never to dive in Loch Ness again or anywhere at all.

The reference to hair whitening is indeed not true in the sense of happening overnight. However, extreme stress could trigger an autoimmune response which renders further hair growth a lighter colour, but that is speculation as such a condition has not even been recorded in Death Row. The only defense is that it is a figure of speech and not to be taken literally.

The two points about the nature of the loch itself take a rather binary view of the situation. The Duncan MacDonald account actually says "the rock ledge" and not "the shelf of rock". A rock ledge can mean several things. In the case of the loch, the land underwater can gently incline before one reaches a precipice which takes us over the edge into the deeper parts of the loch. Or it could simply be a ledge with a small drop and nothing more. It is my opinion that when ledges are spoken of in these reports, we are talking about these initial shallows and it is no surprise that boats end up there.

The other point about poor visibility underwater is taken, but in both cases discussed, the distance between diver and animal is not given, so how do we know it is a problem? Robert Badger states the creature he saw was about 15 to 20 feet away from him. The answer here is depth, once you get to a certain depth at say about seventy feet, then all light is lost. I would suggest these divers were at lower depths and/or the creature was as close as Robert Badger's incident. So visibility, though poor, is not a blocker.

However, Mr. Currie's diver's comments about hundreds of eels does not sound literally true if visibility is out to twenty feet, unless he had a good flashlight or he employed a metaphor to signify a lot of eels. One final thought I would add is that Jim Currie reminds me of the apocryphal James Currie, who was an alleged banker from the 1930s, who held a sensational film of the monster, but held it back until the public took it more seriously (link).  Does that suggest this person's name is not real and is taking us for a ride? With that we move onto the second letter by James Kitwood:

Jim Currie makes reference to a story about a giant eel seen in Loch Ness. He asks if anybody else has heard a similar story. It is said that during the construction of the hydroelectric plant at Foyers on the shore of Loch Ness, a lorry that had been dumping soil into the loch reversed too far and slid into the water. During the salvage operation. divers came up in a hurry and refused to go back as they had seen huge. hairy eels. In a related story about the Foyers power station, there was a rumour of giant eels that had been trapped against the metal grilles on the entrance to the water intake pipes. (Ness Information Service Newsletter 84, Oct 1987) In 1998 I wrote to Scottish Hydro Electric and received a letter from a man who had worked there since its commission in 1975. He said that the story about the lorry was unsubstantiated and the issue of large eels getting into the water-cooling system was a physical impossibility.

He did, however, relate a story he heard as a child about a diver who was lowered into Loch Lomond. When he resurfaced not only was he badly shaken, but his hair had turned grey. It seems this story is not unique to Loch Ness. Another Loch Ness eel story that may yet be possible to verify concerns a minesweeper travelling through the loch at the end of World War I. Apparently, the crew thought it would be a good idea to try and blow up the creature. They released a depth charge and after the explosion the bodies of two eels floated to the surface. One was 11ft (3.4m) long and one was 9ft (2.7m) long- but this was just the tail end of it! (Ness Information Service Newsletter 116, April 1993)