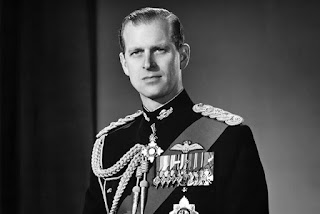 As the day of the funeral of HRH Prince Philip, Duke of Edinburgh approaches, it would not be out of place to mention in the various and numerous articles and documentaries, that he had an interest in the mysteries of life.

In listening to the various tributes to the Duke of Edinburgh, I learnt he had amassed a total of over ten thousand books in his library at Buckingham Palace. These would have covered a vast array of subjects to satiate his inquiring mind. Naval, historical, equine, theological and others filled the shelves and apparently also his keen interest in UFOs after one allegedly landed on the estate of his uncle, Lord Mountbatten (see link).

That interest looked to have persisted as we are told that only in 2019, he was reading a book on the Rendlesham Forest UFO incident in Suffolk. Apparently he amassed a sizable number of books on that subject. But what about the other mystery swimming in the depths of Loch Ness? How many books did he possess on that subject? I suspect more than a handful.

Back in the 1960s and 1970s, it would seem he was well connected enough on the subject through his association with Sir Peter Scott (both below). Their shared love of ornithology and conservation work led to a lasting friendship. Scott's work with the Loch Ness Monster is well known. In fact. in the same year that he was inviting Prince Philip to be the first President of the World Wildlife Fund, he was also setting up another organisation, the Loch Ness Phenomena Investigation Bureau.

It was unlikely that he would invite the Prince to patronise such an organisation in the same manner, especially after the embarrassing episode the year before of Scott using his Royal connections to persuade the Queen and the Duke of Edinburgh to be amongst the first viewers of Tim Dinsdale's film and to discuss the creature being dubbed "Elizabethia Nessiae" in her honour (further details here).

However, it is fairly certain that Sir Peter Scott kept the Duke abreast of developments at the loch, especially when they tended to sit together at WWF board meetings. One suspects, though, that prudence kept him from recording any such private conversations. A better source is from David Clarke's book, "Britain's X-traordinary Files". In it he mentions how another of the Loch Ness Phenomena Investigation Bureau's founders, David James, got involved.

We learn that James had a conversation with Prince Philip regarding his plans for the Bureau at the loch and how to fund it after their second expedition there. I'll wager Peter Scott brought the two together. The Prince's reply was that he contact Solly Zuckerman, Chief Scientific Advisor to the Ministry of Defense. The lending of sonar equipment and expertise was discussed, but the MoD did not think it prudent to be seen using military resources in the pursuit of a monster. David also point out on his blog another instance where the Duke was involved:

Indeed when sightings began again after the war, the Duke of Edinburgh suggested calling in the Royal Navy to solve the mystery.

It seems this suggestion did not get very far either. The Duke of Edinburgh evidently had a love of mysteries, but we are left with the unanswered question which he is no longer here to answer - what did he think the Monster was? I suspect that answer would have depended what year you asked him.

Perhaps his last answer would have been "a load of bloody nonsense" which seemed a phrase attributed to him. But then again, I would like to think he visited this blog and other like minded ones at least once or twice ....

Rest In Peace, Prince Philip. A reading taken from his funeral, Ecclesiasticus 43:23-25

By His wisdom he calmed the great oceans
and placed the islands there.
Sailors tell about the dangers of the sea,
and we listen to their tales in amazement.
In the sea are strange and marvellous creatures:
huge monsters and all kinds of living things.