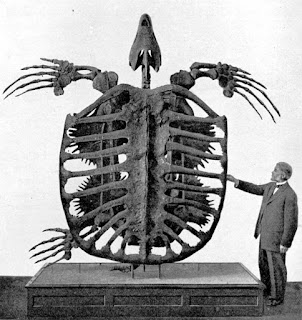 My fellow Nessie believer, Henry Bauer, has been in the news recently as his latest views on what the Loch Ness Monster could be has gained some attention. Henry has moved away from the popular plesiosaur theory to consider whether the monster could be an ancient, unknown species of the giant turtle. Henry actually published this theory as a paper back in March 2020 for the Journal of Scientific Exploration and you can read his original paper here.

Now as to the actual theory, the idea that Nessie could be some large form of sea-going turtle has been going around since the very first year of 1933 (see link). When Hugh Gray's famous photograph was published in the Scottish Daily Record, a Major Meikle wrote to the 8th December 1933 edition of the paper commenting on how much the hump and the head to the right of the picture looked like a "leathery or green turtle". He differed from Henry in that he thought a known species of turtle was sufficient to explain the new story from Loch Ness. 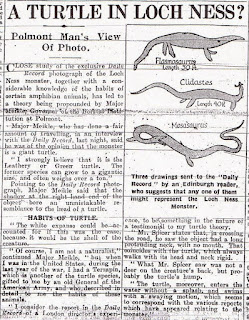 Now one could imagine that the head in the Gray picture (below) could resemble a turtle's head, though my own preference is fish like. However, the tail to the left is much longer than any known species of turtles swimming the seas just now. Nevertheless, it is an unknown species of turtle with some adaptions over the vast ages that Henry has more in mind. 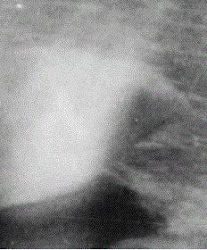 Back in 2013, I also wrote on a TV documentary entitled "The Loch Ness Monster Revealed" from the Discovery Channel which speculated upon a possible variant of turtle that was dubbed the plesio-turtle which sounded more like Henry's speculated beast. They produced the theoretical image below with the outstretched neck which did not look that different from some known species such as the snake necked turtle (below). One has to be reminded that though such species have Nessie like features, they are significantly smaller than our denizen of the loch. 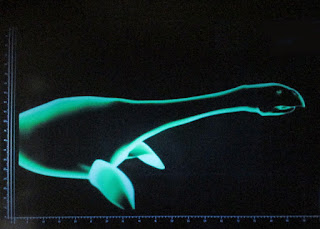 Other factors in this hypothetical turtle's favour are the long times they can spend underwater, even absorbing oxygen from the surrounding water and controlling their metabolism to even hibernating underwater. The high oxygen content of the loch also favour creatures who employ such biological devices. The fact that we do have very large turtles in the fossil record also confirms that no unrealistic gigantism is required as we see applied to other theories. This is demonstrated in the photograph at the top of the page which shows a fossil skeleton of the extinct species Archelon which grew to at least fifteen feet long.

However, like all theories (including sceptical ones), there are drawbacks. Turtles lay eggs and go ashore to lay them in often large numbers. No such activity has ever been witnessed of the Loch Ness Monster. Indeed, it is doubtful that any that could be construed as reproductive has ever been observed with any certainty.

Obviously, no eggs have been found or the mystery would have been solved by now. It could be counter proposed that such a cryptid turtle gives birth to live young but since all known turtles lay eggs, this would seem a drastic departure. It may be suggested, like our snake necked turtle above, that it could lay eggs in the waters of the loch. The problem here is that the snake necked turtle lives in the warm waters of Australia. It is unlikely a developing egg could survive in the cold waters of Loch Ness.

The other issue is that the recent eDNA study by Professor Neil Gemmell revealed no reptile DNA, let alone turtle DNA. Henry takes hope in the 25% of DNA samples that were not readily identified with any species from the genome database. That may be true, though the fact that less samples were taken at the lowest depths of 200 metres may be a better explanation.

One could go on further about shape changing humps, long necks with non-turtle heads and three toed limbs but the truth of the matter is that no theory fully explains all the features described. The turtle theory is at no disadvantage there compared to other theories and doubtless is ahead of others. But we have a eyewitness database which will contain misidentifications and hoaxes which only muddy the waters. To that we can add those genuine eyewitnesses to a genuine monster which imperfectly describe what they see. How that is handled is entirely down to each investigator and their own combination of skill and bias.

I certainly prefer the giant turtle theory to the giant eel theory but still have my doubts when I compare it to the AAA sightings. For example, our last article on the John MacLean sighting, would a giant turtle fit all that went on there? My thinking is that it would not.