Some Nessie Photos from William Jobes? 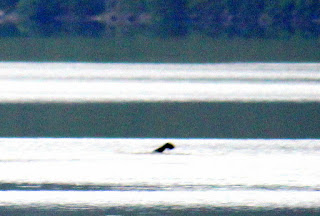 William Jobes will be known to many of us for his Nessie photographs which appeared in the press back in 2011. I will be saying more about that when I come back from Loch Ness next week, but William emailed me some more photos he took back in 2011 which are now published here for the first time.

This sequence of pictures was taken when William returned to the loch three months later on the 31st August 2011. He was at the Fort Augustus boat jetty near the old Abbey on the morning at 7:36am. He noticed a disturbance in the water about 400-500 yards out in Borlum Bay and began to take photos. The sequence began with this water disturbance below and ended with the object we see on the surface in the first picture. All in all, the episode only lasted seconds before the object was gone. 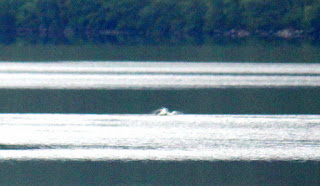 The reason these stills have lain dormant these past six years is because William lost the original images when his laptop died and all he had left were these enlarged images which we show today. Despite that, I thought they were still worth publishing to generate discussion and get lake cryptid people up to date on what objects continue to be snapped at Loch Ness.

What it could be will obviously produce some varied opinions, some more sensible than others. The more conventional explanations of driftwood, wreckage or a deer seem less convincing since the object was visible for only seconds. From a Nessie point of view, it has that aspect which reminds me of those who describe a more horse like appearance to the creature. In fact, this image reminds me of the John Mclean account from 1938.

William took some other pictures during that trip which I show below. Indeed, this picture below was taken on the same day, only four minutes before at 7:32am from the same place at the Fort Augustus Abbey jetty. The pictures were taken with a Canon EOS 550 camera and a Canon 55-250 lens. 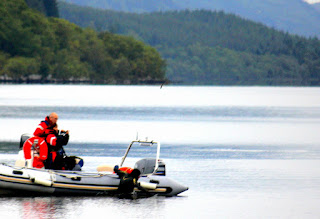 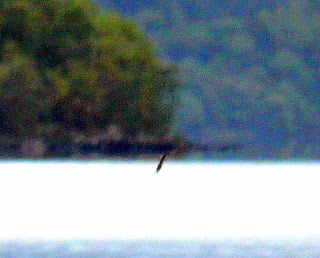 Since this was taken near the old Abbey, it was natural of William to suggest this reminded him of that famous sighting by the late Fr. Gregory Brusey in 1971. Indeed, a drawing done by the man himself was done for William years back is shown below for comparison. 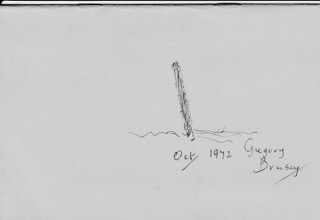 Now the thing I have to point out here is that William takes a prodigious amount of photos on his many visits to the loch. So, when he gets back home, it is down to examining the myriad of images for anything that he may have missed the first time round. This image was one of those instances where he shoots first and ask questions later.

So, in that context, he did not see anything at the time and only noticed when he went through the many images at home. I asked whether the boatmen in the foreground of the picture had acted as if they had seen anything and he said they did not. Indeed, looking at the photo, they seem rather preoccupied with their own affairs.

I suggested that since the object looked a bit sharper than its surroundings that it may have been a fleck of material that temporarily stuck to his lens, but William said that there was no irregularities on the following few frames and nothing on the lens around the time of shooting as he regularly checked through the viewfinder.

Pole like Nessie reports are a fascinating aspect of the mystery and I covered them in a previous article. Various explanations were posited for this special class of report including  jumping fish, birds, buoys, driftwood, hoaxes and, of course, the creature itself.

The fact that the two objects were photographed a mere four minutes apart made me wonder if they were different aspects of the same creature. Again, William thought it unlikely the distance between the two locations could have been covered in four minutes.

So, two photos of interest, at least one of which may well be an image of the famous Loch Ness Monster. Just the motivation I need before I head off to the loch tomorrow!