You may know about the case of UFO researcher, John Keel, and the fabled 1896 Loch Ness Monster story. For me, it began with a reference to the case in Ted Holiday's 1973 book, "The Dragon and the Disc". However, the origin of the story appears to have come from John Keel's 1970 book, "The Complete Guide to Mysterious Beings" from which I show the relevant extract:

Given one of my favourite pursuits is tracking down old stories of monsters in Loch Ness before the modern Nessie era, this seemed like gold dust. But no one had ever found it and I stated so in my book, "The Water Horses of Loch Ness". Henry Bauer said he had scanned every issue from November 1896 and found nothing. I concur with this, having done the same via online resources recently. There is nothing from that month that bears the slightest resemblance to  a monster in Loch Ness.

Naturally, sceptical books from Binns' "The Loch Ness Mystery- Solved" in 1983 to the recent "Abominable Science!" have latched onto this as proof of poor claims on the part of Loch Ness Monster researchers. They don't, however close the book on this story. That can now be done.

The solution was simple, having an online resource, change the terms of the search and another issue with the image below turned up. 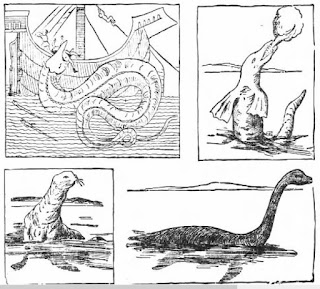 Do we have a woodcut image as described by Keel? Yes. Do we have Nessie like images? Yes. Is this part of a full page article? Yes, this is a full page article, but it is not on the Loch Ness Monster. It is from the Atlanta Constitution issue of May 2nd 1897 and is titled "What We Know of the Sea Serpent" and draws on the work of A. C. Oudemans' prior book, "The Great Sea Serpent". The full page is shown below. 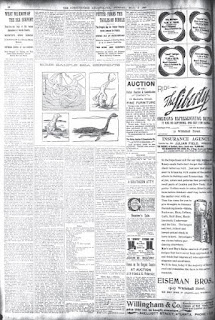 Keel had got his dates wrong. The issue he had in mind was six months later. Moreover, the article was not on Nessie, but her marine relation, the sea serpent. Keel made an honest mistake and misremembered what he had seen; possibly years later. If he had made a note of the date at the time he was going through the microfilm, the issue would have been resolved and put to bed a lot earlier than August 22nd 2016!