It must be one of those nerdy things. Most people will prick up their ears at a Nessie story if it is a new photo, film or some exciting testimony. Here we like to get into the minutiae. Previously, I had addressed the puzzle of John Keel's 1896 Nessie. I now address something mentioned by Peter Costello in his 1974 book, "In Search of Lake Monsters". I quote from the recently released Kindle edition:


The animals in Loch Ness were even well known enough to be mentioned in the Glasgow Evening News in 1896.


No more is said by Costello and since then I have been left somewhat in limbo wondering what was said in those times about Nessie? Henry Bauer, in his "Enigma of Loch Ness" expresses frustration that Costello did not provide more information while arch-sceptic Ronald Binns, in his "Loch Ness Mystery - Solved", dismisses it as another example of so-called poor research by Nessie believers.

I had not resolved the issue in my book, "The Water Horses of Loch Ness", but by chance, the matter came to the fore during a visit to a bookshop on the Isle of Lewis in July. As is my wont, I went to the relevant section of the shop to check out publications relevant to folklore, legends and cryptids.


There the matter resolved itself as I flicked through a book published in 2006 called "Strange Things" written by John Campbell and Trevor Hall. This book is subtitled, "The Story of Fr Allan McDonald, Ada Goodrich Freer, and the Society for Physical Research's Enquiry into Highland Second Sight". However, the findings of any such enquiry were never published, most likely because there was nothing to publish. Suffice to say that Ada Freer was the woman charged with going up to the Highlands to do the investigation. 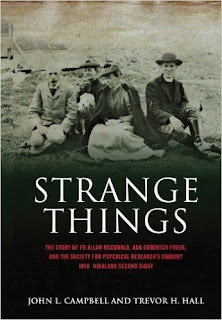 That in itself is a secondary matter to our own enquiry, but checking the book's index for Loch Ness references took me to a page which said this:

On returning to Oban from her trip to the isles, of which no more is known for this year (1896) as Lord Bute was in bad health in the autumn of that year and no letters written to him by Miss Freer after that of 20th August, already quoted, now exist, Miss Freer found the following comments on her activities quoted from the Glasgow Evening News in the Oban Times of 26th September:


Reading through the article recounts Miss Freer's travels through the Highlands and Hebridean islands, before coming to the bit of interest to us:


Also the uisge-each, as Miss Fiona MacLeod calls the water-horse in Gaelic which will bring a blush to the cheek of Celtic modesty, still cavorts in Hebridean meadows at nightfall, and Loch Ness is full of water-bulls.

But none of these manifestations is, we fear, for a lady interviewer with a kodak. To them must be brought the eye of faith and an hereditary nose for the uncanny gifts that stenography and the snapshot lens are poor substitutes far.


This would appear to be our 1896 Loch Ness Monster reference, or as they called it in those days, the Loch Ness Water Bull. The Glasgow Evening News is not available online (though it is available as microfilm in the Glasgow Mitchell Library). However, the Oban Times was also available on microfilm at the National Library of Scotland, which I occasionally frequent. So, I consulted the quoted Oban Times for 26th September 1896 to see the original source (shown below).

Zooming in on our target text, shows it has been correctly quoted in Campbell and Hall's book. As an aside to researchers, the Oban Times is also available online, but a text search revealed none of this story. One can only presume this issue missed the scanning process.

So another vague reference to the Loch Ness Monster is solved. But how did Peter Costello know about this source? The answer is that "Strange Things" was first published in 1968 (cover below) and so someone with a common interest in the paranormal and Nessie must have tipped off Costello and the Loch Ness community in general. My money would be on Tim Dinsdale, who was known to have an interest in both mysteries; but that is merely a guess. 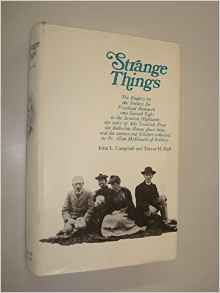 What can be said about the actual Loch Ness reference? The first thing to note is that when the famous Water Horse (or Bull) of the Highlands is mentioned, out of all the many lochs in Scotland, the author plumps for ..... Loch Ness. Why am I not surprised? And this is 37 years before the Loch Ness Monster turned up.

Having studied the various references to loch monsters in pre-1933 literature, Loch Ness dominated and this article from 1896 just confirms what is known already. Nessie is the dominant lake cryptid as it was the dominant Kelpie in the 19th century.

Secondly, Loch Ness not only had a Water Bull, but it was "full of water-bulls". This may be a reference to a similar phrase from folklorist, John Campbell of Islay. But it tells us this was more than just a passing reference or an obscure tale from ancient times, but repeated, multiple stories of something strange in Loch Ness. Again, why am I not surprised?

Of course, sceptics today will pooh-pooh all this as just tall tales and mythology. Mind you, don't they say the same thing about modern reports? The problem is that critics expect something akin to a modern plesiosaur-like sighting report, but from Victorian times. That is not the way it works. People back then expressed what they saw in their cultural terms, just as people do today. However, underneath all this was the same, unknown creature.

What further does not surprise me is that once again the newspapers of the time poured disdain on such a beast. The phrase that will please hardened sceptics is "but none of these manifestations is, we fear, for a lady interviewer with a kodak ...". In other words, the newspaper author does not expect these creatures to be real. This confirmed my prior view that Victorian newspapers did not take these things seriously and hence did not publish accounts.

In summary, John Keel's story about the Atlanta Constitution's Nessie story was wrong. However, the reference to the Glasgow Evening News' Loch Ness monster was true. One could complete the loop by consulting that edition of the Glasgow Evening News published some days before the 26th September 1896. However, I do not anticipate that the Loch Ness reference there will differ at all from that in the Oban Times.

Therefore, I am glad to add this reference to the growing list of pre-Nessie Nessie accounts!