Whenever close up pictures purporting to be of the Loch Ness Monster appear, the "too good to be true" tag is almost without exception immediately applied. That goes with the territory and of course some are too good to be true. The photographs taken  by James Gray on the 9th May 2001 are no exception. I covered this story in my book on Loch Ness Monster photographs, but I wanted to add something here which was not fully covered in the book.

A recent Facebook post has revived the idea that this was a picture of a car bumper slowly descending into the water. To be specific, a Morris Minor bumper. As it turns out, James Gray, who has now passed away, was indeed a classic car enthusiast and was a member of Morris Minor fan forum. You can see his car here and what a Morris Minor car bumper looks like.

The car bumper theory goes back to the beginning of this particular story and was first posited by Dick Raynor to Rip Hepple. However, it appears to be a semi-serious suggestion as Rip discounted it and Dick Raynor does not propose it as an explanation on his own website where he analyzes the photographs. This view of the pictures slips from view until Colin Veacock, a member of Steve Feltham's Facebook group, recently revived it (see link).

I don't think this theory holds and the object is not a Morris Minor bumper used as a hoax prop. One may argue it is another car bumper and given there are hundreds to choose from, you may feel confident that you will come across a perfect match. The reason I do not think that will work either involves Dick Raynor and some extrapolations.

In the aforementioned analysis by Dick, he attempts an estimate of the length of the object based upon some principles of photographic trigonometry using the camera angle, height above the water, the distance to the horizon and so on. James Gray had also supplied the specifications of the camera at the time of shooting which led Dick to estimate the vertical height of the object as 1.72 metres or 5 foot 8 inches - which was very close to Gray's estimate of 6 feet.

Assuming all of this to be accurate, some further calculations can be made. Since the object is inclined at an angle to the calculated vertical, a right angle triangle is roughly drawn below. A ruler is then employed to estimate the length of the horizontal line as 1.05 metres. A simple trig calculation gives a hypotenuse length of 2.01 metres. The object is yet even longer than that number as it is arcing. I could do a further calculation where the neck/arc forms part of a wider circle, the radius is estimated and hence the circumference. But I will leave that as an exercise for anyone so minded. 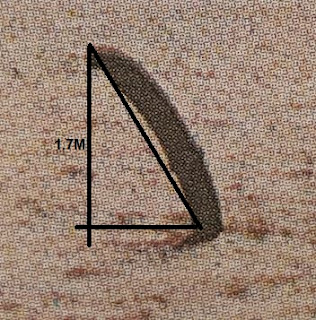 The next step is to assume this is a car bumper and the curious double "notch" visible about two thirds of the way down the object is the midpoint of the bumper. That being the case, this would imply another quarter of the bumper is underwater. Adding the missing quarter gives a total "bumper" length of 2.68 metres or just under 8 feet 10 inches. Now let us compare some bumper sizes.

In such a case, it is sufficient just to know the width of the vehicles and maybe add ten or twenty percent for the bumper ends. A Morris Minor is about five feet wide. A Volvo Estate is just over six feet wide and a DAF truck cab is about seven and a half feet. These example demonstrate sizes rather than whether such bumpers are suitable for such a supposed hoax.

The conclusion would be that if this was a bumper, it would have to be of an excessive length and certainly not one belonging to a car. Based on these numbers, any idea of a bumper should be excluded. In fact, no one I am aware of has offered an explanation as to what this was. Dick Raynor in his analysis could not find fault with the photograph and in fact had to resort to guilt by association because Gray knew Roy Johnston, who took another series of photographs a year later. James Gray explained to me before he died what that was all about.

But when you have decided a photograph is too good to be true, you are then obliged to look for solutions that remove the problem.