Let me update you on a couple of upcoming talks related to the Loch Ness Monster in chronological order. First up is a talk by Charles Paxton next Tuesday organised by the Edinburgh Skeptics as part of their Edinburgh Fringe meetings. The talk is described above which he tells me will refer to the beast at various points. You may wonder why I am promoting a talk by a skeptical society and indeed, Charles himself does not believe there are any large animals in the loch. However, I am interested in how he will define the gap between science and pseudo-science in the context of the search for unclassified animals. That is a conversation all cryptid hunters should engage in rather than reject it just because zoologists don't go near their chosen subject. The talk is free at the Banshee Labyrinth Pub just off the Royal Mile at 7:20pm, first come, first served with a donation encouraged. 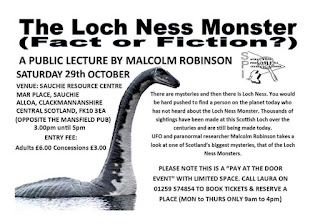 The next talk is more for believers in our favourite cryptid. On the 29th October, Malcolm Robinson will deliver a lecture on the Loch Ness Monster as part of his monthly series of talks on mysterious subjects. Malcolm will be known to readers as a leading UK paranormal and UFO researcher and author of various books on those subjects - including one on the Loch Ness Monster shown below. Indeed, Malcolm is not long back from a trip to Loch Ness looking for its famous denizen. 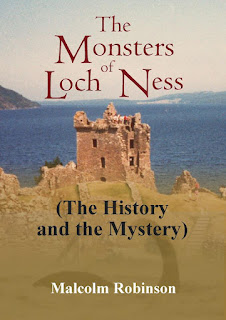 The talk is in the town of Sauchie, about five miles east of Stirling. Further details of the meeting are in the promo image above and I have already booked my seat. I also aim to be at Charles' talk, so it should be a series of interesting events all round.