In the previous article on this famous photograph, we considered a test photograph taken in 2010 which claimed to cast doubt on the stated time of O'Connor's 1960 picture. Aside from doubts that O'Connor actually knew the time with any accuracy, that 2010 photo was shown to have its own problems.

Now moving on, the same article by Dick Raynor also proposed a theory which speculated on how O'Connor allegedly faked his picture. It has been suggested for years that O'Connor had a canoe and the sceptical article tries to leverage that fact to its advantage.

It turns out that the O'Connor family went to Loch Ness in 2010 to commemorate the 50th anniversary of the photograph and had brought a folding canoe which Peter O'Connor had apparently used back in May 1960 (by the way, it seems the O'Connor family were no help in offering proof that Peter faked the story or even providing an uncropped photo). Later, Raynor tried to identify the canoe and decided it was a model called the "Tyne Prefect" which is shown below. 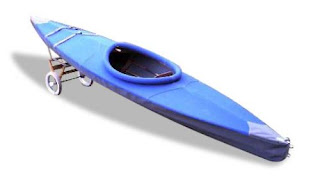 From this he suggested that O'Connor had actually used this canoe to reproduce and photograph a fake monster. Enquiring further, he found the owner of a current Tyne Prefect on the Internet and asked him to sent a photo of it in an O'Connoresque position. This is shown below.

Now if we imagine this theory to be a three legged stool, we are now going to remove each leg in turn until this theory has none to stand on.

The author of the theory had used image overlays in the article to establish the minimal uncropped area of the photo. However, when he comes to this canoe theory, he strangely decides not to do the same procedure. When I did it myself, it became apparent why - the comparison is, at best, unconvincing. The overlay below lines up the top rudder attachment with a point of interest in the photo (as explained below).

Note the canoe is eleven feet long while O'Connor estimated his hump to be upwards of 16 feet or more, so a "shrink to fit" has been done for overlay comparison. So aligning end to end and allowing for part submergence of the canoe gives us this image.

At this point, anyone would say they don't fit and so this is not a particularly good theory. However, Dick Raynor decides not to ditch this theory as a bad idea and does something which should be avoided - he begins to add layers of complexity. In other words, he begins to paper over the cracks.

How does he do that? Using the fact that these kayaks had a canvas skin to contain an unfolded wooden skeleton, he speculates that the canoe was somehow filled out. But that brings us to the problem that rubberised canvas is not very elastic. In fact, just like this theory, it would be stretched beyond the breaking point to achieve the dimensions of the O'Connor object.

I made an enquiry to a canoe forum which was discussing the very subject of restoring these old canoes. I asked how elastic these canvas covers were and got this answer:

These things have some stretch in them, but really very little that you would notice just handling the skin. As you say, just enough to contain the frame. Maybe of the order of a centimetre or two along the full 12ft of the boat. I don't think of them as elastic, but when you press down heavily on the 'scissors' join between front and back of the frame, it levers the bow and stern into the ends of the skin and that lever creates the tension that provides the rocker and ensures a smooth fit to the skin. If you bang on the skin it is tight like a drum.

So, the difference in height between the O'Connor object and our presumed canoe looks too much to overcome. But Dick says, just remove all or part of the wooden skeleton. Nonsense, canvas is not rubber, it will not sufficiently stretch no matter what you take out. That brings us to the problem of the hypothesised stuffing material. Raynor tries to rehabilitate Maurice Burton at this point and talks about the plastic bags, string and stones Burton found.

Stones are not exactly "found" as they litter the entire beach. The bags found by Burton amounted to no more than a few fragments, hardly enough to stuff an eleven foot canoe. That leaves rocks and pebbles and I do not see them achieving the smooth appearance of the O'Connor object. But that is irrelevant as the canvas won't stretch to accommodate the proposed size. It was sewn together to hold a certain wooden framework.

Conclusion? Remove one leg of the stool.

The theory then points out that the canoe has two points jutting out with which to attach a rudder. You can see them to the left on the canoe picture. Dick Raynor thinks he can see one in the O'Connor photo and points an arrow at it (below).

You know, sceptics often laugh at Nessie believers when they find significance in small, obscure features in a photo. It seems the practise is not limited to their ilk. As it turns out, this is just a water effect, probable a wave breaking behind the object. Why do I think that? Because the second rudder point is not visible in the picture. It should be just below or above the other one and I see nothing.

No layer of extra complexity has yet been added to prop up this "evidence". Conclusion? Knock off that other leg.

Dick rightly points out that this proposed structure has a problem. It will topple over on its own. This leads to another layer of complexity as it is proposed that O'Connor's accomplice, Fred Fulcher, held up the canoe for O'Connor as he took the picture. But this is easily shot down when it is pointed out that Fulcher is not visible in the picture.

So, we have another opportunity to flush this theory down the toilet. But, no, more complexity comes when it is suggested that Peter O'Connor painted Fulcher out of the picture! Layer upon layer of complexity, assumption and speculation is heaped up as this theory threatens to collapse under its own weight. Dick speculates the "blotchiness" of the dark background proves the use of black ink or paint (or whatever).

Now just hold it right there for a second!

I thought the dark background was proof that the photo has been taken in the dead of night. Now we are being told the original background has been painted out with black! Joined up sceptical thinking? I don't think so. There goes the final leg. What do we do with the stool seat?  I guess it would make a good frisbee because it is fit for nothing but chucking away.

I wonder if Dick Raynor has read Tim Dinsdale's book "Loch Ness Monster"? Perhaps not, but if he consults Dinsdale's first edition on page 164, he will find these words of Peter O'Connor regarding a stretch of water on Loch Ness:

I crossed the same part by two-man canoe and it took approximately six times as long.

But wait a minute, Dick Raynor is using a one-man canoe for this analysis. These words of Peter O'Connor date back to July 1960 when he went back to the loch (if you think you have had a close encounter with the monster, it is no surprise that you are drawn back to the loch so quickly).

But it makes sense, after all, Peter O'Connor and Fred Fulcher formed a two man expedition and so a two-man canoe was a more suitable vessel to take. Did the O'Connor family make a mistake back in 2010 when they brought a one-man canoe? Probably, and I would take the words of O'Connor himself mere months after the event than that of his family 50 years later.

Either way, we can no longer be sure about what canoe was taken to Loch Ness in May 1960, I am not even sure it can be proven he took one at all. Dick Raynor may "sprint" to a new conclusion, but the identity of the two-man canoe is a mystery which further invalidates his theory.

A little knowledge is a dangerous thing. I have seen it elsewhere many a time; you get a hold of a piece of information, you think it could form a theory that enhances your CV and you begin to erect a structure around it ignoring the problems that mount up as you try to prop up that theory. I have no doubt done it myself and no one is immune from it - be they sceptic or believer.

The trouble with these incomplete theories is that they are based on plausible deniability. People will have trouble accepting a large creature exists in Loch Ness. However, they will have no trouble accepting the existence of canoes at Loch Ness. That is how sceptical theories get their leverage as the ingredient to their theories consist of common objects framed in uncommon circumstances.

Most people will accept them as plausible but very few will take the time to critique these theories and find that, though plausible, they are not always probable for reasons stated here and in similar articles elsewhere.

Part four of this series will follow in due course.