I would like to address a class of Loch Ness Monster sighting that has proved unusual within the context of a generally unusual phenomenon itself. I am referring to the pole like appearances of the Loch Ness Monster, if indeed that is what they are.

To clothe this in some familiarity, I refer readers to perhaps the most famous of "pole Nessies" and that was Father Gregory Brusey back on the 14th October 1971. Relating one account of his sighting from his obituary (he died in 2001):

It was a lovely morning, and the sun was warm and the water smooth," he recounted to The New York Times in June 1976. "And with me was a friend, an organist from London. We suddenly noticed a big commotion about 200 yards out in the water, and then a black neck appeared, about eight inches in diameter and seven or eight feet high, followed by a hump. It rose, then dove sideways back into the water. It was not a boat or a log or a fish. It was a different animal.

The sketch below of his sighting is taken from Dinsdale's "Loch Ness Monster". Back in the 1970s and 80s, Gregory Brusey became a kind of star witness for the Loch Ness Monster as any media group would almost resort to him by default for a good, contemporary Nessie story. It appears that he eventually got fed up with all the attention his sighting had birthed (though he stuck to his story).

To compound the curiosity of this type of sighting, Brusey had another sighting back in the 3rd May 1968, but this was of a more expected "horse like head and two large humps". What is it about these "Pole Nessies" that makes them to differ? 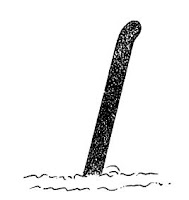 Other sightings describing the neck as a "pole", "pillar" or "periscope" throughout the 81 years of Nessie include:


This gives us about 17 "pole" sightings from a total of about 200 head and neck sightings which is 8%. Neck sightings overall constitute 18% of the total sightings record. So this class of sightings is rare being only 1% of all eyewitness reports.

The main reason I was prompted to write this article was an email from a Dr. Simon Cooke who was led to tell his tale for the first time having read this blog. The story is told below in his own words.

I've read with interest your excellent blog on the LN phenomenon and thought you'd be interested to hear of a possible sighting experienced by my wife and myself on a August evening in 1993.

We were on our honeymoon, and staying at a B and B in Dores. Following a meal at the Dores Inn we walked along the beach. This was about 7 in the evening, and very clear and bright. The surface of the loch was very still. When we approached the far end of the beach we noticed what appeared to be a black pole sticking out of the water, which then sank down vertically. It was about a hundred and fifty yards from the shore.

The object continued to rise and fall for about three minutes, each time disappearing and then reappearing in a different place - sometimes to the left by a few feet, sometimes to the right. I knelt down and looked directly across the surface of the water, and could see clearly a small splash as it sank and rose.

Needless to say, we had neither camera nor binoculars (I don't possess a set). We weren't expecting to have what might be a sighting and were both surprised by what we were seeing. We both formed the impression that this was something living, and definitely not a log, although it did look like a telegraph pole rising and falling.

Out of curiosity I subsequently did some research. What we saw looked exactly the same as the object appearing in the Smith film, reproduced on Arthur Clarke's Mysterious World. Nessie or not, this was probably the same phenomenon, in about the same place.

I'm not making any great claims for this, but I thought you'd be interested to hear of it.

Requesting further details, I was able to ascertain that the object was visible in spells of about 30 seconds with the height of the object varying by as much as five feet. It always submerged in a vertical manner, but they had the impression it turned on its axis as it went down. The date was revised to July 29th 1993 and the sighting lasted 3 to 5 minutes. Nothing else was in view on the loch surface. Simon included some drawings which I include below. 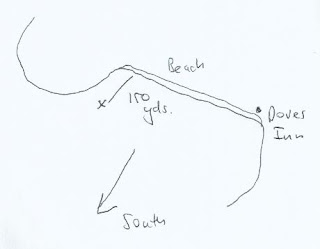 So what non-monster explanations can be suggested for what Simon saw? We will consider their merits here.

This explanation is best told by regular reader, Simon Dawes, who had this story to tell.


I actually wanted to share with you something that I saw that initially made my heart race but turned out to be a fish. It's something I've never heard mentioned but I saw it at Fort Augustus on the jetty. I was looking at the Loch and in my peripheral vision noticed something come straight up out if the water at a fair speed and drop straight back down.

So I carried on looking and it happened again and this time I had a clear view of what looked like a pole straight up and down about 3-4 feet long, I called my dad over and he watched it happen several more times. He knew that it was just a pike fishing but if he hadn't been there we both know what I would've thought I was looking at!

Pop reckons it's how they fish? Swim with the prey between them and the surface of the water and then shoot up so fast they come out of the water as they grab the prey. It fits what I saw but I've never seen it before or since.


That's a good explanation and will fit some sighting reports. However, the reason I don't think it fits the bill for the Cooke sighting, is that his object stayed above surface for up to thirty seconds.


Clearly, a long necked bird whose body may be obscured by the waves could occasionally submerge and come back up in the kind of intervals and locations mentioned. The problem here is that the object was described as pole like. No bird fits that description.


There are navigation buoys in that general vicinity which will be tall, erect and of similar height. But they have a large extended body underneath and they do not sink in the manner described. It would not be a very good buoy if it kept sinking out of sight! They are also not black but more green and red to improve visibility to boat traffic.

Many branches and other parts of tree debris flow into Loch Ness from its various rivers and streams. It is a fact that some of these can take on a Nessie like appearance. Most will be easily recognised after some inspection. In rough conditions, one such branch protruding from a submerged trunk could give the impression of appearing and disappearing.

However, in this case, the loch surface was described as "very still" and the witness has already discounted a log as an explanation. The object also disappeared from view permanently.


This brings us to another famous "Pole Nessie" sighting from 1977. It was an 8mm cine film of a pole like object taken by Peter and Gwen Smith (pictured below). Eventually, suspicion fell on a group of schoolboys who were nearby at the time and also claimed to have seen the creature while out on a rowing boat. The sceptical hypothesis was that they had rigged up a fence post with an anchor on a rope to fool the Smiths. 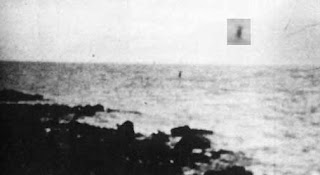 Now, as far as I know, no one has admitted to this proposed scenario, and neither has it been proven that the boys had the skills to pull this stunt off. However, the technical feasibility of the fence post trick has been demonstrated by Adrian Shine and was repeated in 2002 by researchers Richard Carter and Dick Raynor.

Could the Cookes have been fooled by a prankster or were inadvertent witnesses to an experiment? It can't be discounted, though some questions have to be asked, such as did Adrian Shine perfect this technique before 1993, can such a pole be moved to varying locations and can a pole be made to rise five feet from the surface?

The 150 yards distance may also be an issue, though it is possible our hypothetical trickster was hiding in the undergrowth beyond the beach to the left of the map above.


So what if the Cookes saw the Loch Ness Monster? It would be another of those strange pole like Nessies which seem to have no head and all neck. Now, I have said it on this blog before, I don't think the head and neck of Nessie is as classical as made out. I mean, I don't think it is a neck but more a proboscis. By that I mean an extended trunk or appendage but not a head.


The corollary to that is that it is boneless and very flexible and malleable in form. It may contain a mouth or sucking part that connects to the oesophagus. It may also have other sensory organs at its extremis.

The consequence of this is an ability to stretch and tense itself via its musculature into a range of lengths and thicknesses. The pole like structure would be envisaged as its most tense and taut form. Why the creature would assume various proboscis postures is unknown.

One final thought as regards this and the fossil record. Critics have asked for a precedent for the Loch Ness Monster from the fossil record. The plesiosaur is the obvious candidate but if we have a boneless "neck", I suggest it is less amenable to preservation as fossilisation is more a hard tissue process.

That does not make it impossible for something like an outline to be preserved, but it may be that when we are looking for Nessie precedents, perhaps we should not be so preoccupied with matching long neck vertebrae.