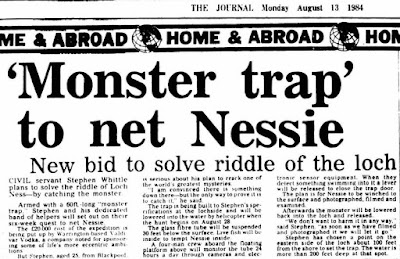 A news story from August 1984 exemplifies the story of a laudable attempt to capture final proof of the monster of Loch Ness. The text runs as follows:

CIVIL servant Stephen Whittle plans to solve the riddle of Loch Ness - by catching the monster. Armed with a 60ft long "monster trap" Stephen and his dedicated band of helpers will set out on their six-week quest to net Nessie. The £20,000 cost of the expedition is being put up by Warrington based Vladivar Vodka, a company noted for sponsoring some of life's more eccentric ambitions. But Stephen, aged 25, from Blackpool is serious about his plan to crack one of the world's greatest mysteries. "I am convinced there is something down there - but the only way to prove it is to catch it." he said.

The trap is being built to Stephen's specifications at the lochside and will be lowered into the water by helicopter when the hunt begins on August 28. The glass fibre tube will be suspended 30 feet below the surface. Live fish will be inside to tempt Nessie inside. A four-man crew aboard the floating platform above will monitor the tube 24 hours a day through cameras and electronic sensor equipment. When they detect something swimming into it a lever will be released to close the trap door. The plan is for Nessie to be winched to the surface and photographed, filmed and examined. Afterwards the monster will be lowered back into the loch and released.

"We don't want to harm it in any way,- said Stephen. "as soon as we have filmed and photographed it we will let it go"

Stephen has chosen a point on the eastern side of the loch about 100 feet from the shore to set the trap. The water is more than 200 feet deep at that spot. The device will be serviced from a base camp on shore. Stephen is still recruiting students for the 30-strong team who will take turns manning the trap during the hunt.

Stephen said "The various scientific exercises and sonar readings which have been made of something large moving in the loch convince me there is something down there, though I don't know quite what. The one way to find out is to catch a live specimen. There has to be some kind of breeding colony down there. We will probably find they grow to a maximum length of  25 feet. The creature obviously feeds on fish because there is insufficient plant life down there to support anything that big.

It will take a little while for it to get used to the trap being in the water, but I think six weeks should be long enough to pull one in. If we fail it won't change my mind about their existence. But until it gets a scientific name and credibility, I know most people's tongues will remain firmly in their cheeks when they talk about the Loch Ness monster".

The expedition is being aided by members of the Loch Ness Project, a scientific team engaged in a long term investigation of the mystery. Project leader Adrian Shine said "We're the most sceptical investigators so far. But we are greatly impressed with some eye witness accounts and strong, deep sonar contacts. Until we have resolved what they are, we will continue our research. There is no scientific reason why there should not be a relatively large animal in Loch Ness". 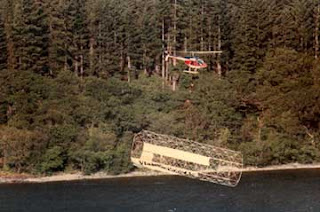 I had previously written on various attempts across the years to physically capture the creature and this was certainly one of the most ambitious. You can also read Adrian's reflections on the Loch Ness Project's involvement here which also reveals their part was more complex than the newspaper article suggests. The above photo of the trap being dropped is taken from the same website. Adrian has misgivings about such efforts due to disruption to boat traffic, possible danger to other species and the introduction of invasive species (used as live bait).

I previously gave the Vladivar trap minimal odds of 250-1 for succeeding. The trouble is I don't think the creature is a frequent occupant of the upper pelagic zones down to 30 metres and  I disagree with Stephen Whittle that there is necessarily a breeding colony of such creatures in the loch. Some other technique is required and we await the possible "capture" of Nessie in the form of micro fragments of DNA floating in the water.

But there is one thing I disagreed with Adrian on and that is the matter of dredging for Nessie bones. Adrian's main argument against this is the valuable resource that the undisturbed depths of silt provide as a chronological record of the loch environment going back thousands of years. I do agree with him in that regard, but the silt bed of the loch must be about a dozen square miles or more in extent, so why can't a designated but small area of the loch bottom be reserved for the purposes of dredging and analysis?

Admittedly, care would have to be taken that the uplifting of samples did not result in silt clouds contaminating the surrounding area too much. However, even dredging up 100 square metres would constitute a minuscule portion of over 30 million square metres of loch bottom. The problem is of course the logistics of drawing up such large amounts of silt and debris.

The alternative is the more surgical approach wherein sonar targets on the loch bed are identified and probes such as ROVs or the more recent Munin AUV are sent to investigate them. The first problem here is that only more recent carcasses could be explored as older ones are below the silt. The second problem is that a general sonar survey of the bottom may lack the required resolution to identify potential targets - hence the need for AUVs and ROVs in the first place. However, it is a viable technique that has been used in the past.

Meantime, and as said above, we await the results of the eDNA survey.