Arthur Grant gets his own Plaque 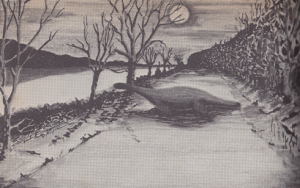 It was with some satisfaction that I read Wednesday's Inverness Courier and a plan by local businessman, Willie Cameron to place plaques around the loch giving information on famous Nessie sightings. First I reproduce the story here from the original link:


Businessman pushes for 'Monster Trail' to show Nessie at her best

Willie Cameron hopes a new plaque installed at The Clansman Hotel will set a trend around Loch Ness.

BUSINESSES around Loch Ness are being urged to help create a new monster trail by sponsoring special plaques relating stories and anecdotes about the area’s most famous resident.

Despite countless reported sightings of Nessie – as well as several infamous hoaxes – little information is available at locations around the 23-mile long stretch of water.

Drumnadrochit company Cobbs has now seized the initiative by installing an engraved plaque at its lochside Clansman Hotel, relating the 1934 sighting by motorcyclist Arthur Grant who reported seeing a long-necked creature in the water on a January night.

Company director Willie Cameron is now urging other businesses and organisations to sponsor plaques relating to more tales of Nessie through the years.

"The majority of people who come to Loch Ness come here for one reason – the Loch Ness Monster," he said. "Yet when you go round the loch, there is very little indication relating to the mystery."

He envisages the installation of plaques at 25 different locations, depending on permission from agencies including Highland Council, Bear Scotland and landowners.

The ultimate aim is to develop an app which would contain further details as well as information about any sponsors.

"It is good for business and it is excellent for exceeding customer expectations relative to the sense of place," he said.

"I have driven around the loch and not found anything other than in the Loch Ness Visitor Centre.

"What signs there are tend to be negative – no camping, no litter, no parking, no this, no that. These signs would put out a positive message." 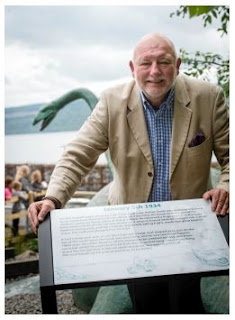 I say all this because back in April, when I was conducting a guided tour of the loch for a client, we began at the Clansman Hotel discussing the Arthur Grant land sighting of 1934. My own research had indicated that Grant more likely saw the creature that moonlit night close to the hotel rather than a mile up the road at Abriachan. That reasoning is laid out in my latest book on land sightings.

However, I noted that the hotel displays a large model of the Loch Ness Monster by one of the streams feeding into the loch and it struck me that this "Nessie" on land was a great reminder of the Nessie on land seen by Grant possibly just yards away from it.

So, after the tour, I emailed Willie Cameron recounting this and suggesting it would be a good idea to erect a plaque by the model to remind visitors of that monstrous event. Good for Nessie, good for the hotel. I am glad to say Willie took me up on the idea and we now have the plaque installed.

However, being the local businessman he is, Willie has seen the opportunity to expand the idea to the whole loch with up to 25 such plaques being placed at sites. I think it is a great idea and gets away from the sceptical idea that we need to concentrate tourism on other aspects of the loch and push the monster as far away as possible from the tourist eye.

If the various tourist enterprises with their Nessie oriented items is anything to go by, they completely disagree with that notion. Sorry. but Loch Ness is all about the Loch Ness Monster and anything that promotes that ancient link is fine by me.

It's early days and we may not see something looking like the proposed Nessie Trail until next summer. It may well have its issues such as famous sites which are hard to get to (e.g. Hugh Gray), some locals may object to plaques being sited near their homes and will sceptics fight it all the way?

My one hope is that these plaques do not include sceptical disavowments as a general rule. A plaque which says "so-and-so saw a six foot neck and ten foot hump here ... but it was actually just a line of ducks" is a pure anti-climax. Adding that so-and-so claimed to have seen this is okay, but we don't want a series of plaques which tries to debunk away the area's most famous resident.

Now don't get me wrong, you are going to get a spectrum of opinions from Nessie believers on what is and is not a true sighting. The point is one group's agenda should not be imposed on this. I don't think the Surgeon's Photo is real but I still think a plaque should be placed at Altsigh to mention it.   However, I assume a map or some form of literature will accompany the trail and that should point out that these sightings, photographs or films generate controversy and some accept them and some don't; let everyone make up their own mind.

Just let the original people tell their story without any revisionism. As Willie says. we want "to put out a positive message"!