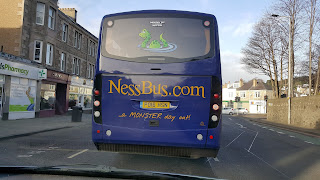 As I drive the streets of Edinburgh, you will see them almost every day. Buses of various shapes and sizes zooming towards the Forth Road Bridge to deliver their cargo of tourists to Highland destinations. But there is one destination that is always on the itinerary and that is the famous Loch Ness. Or should that be rephrased as the one destination of the Loch Ness Monster?

Having disgorged their contents at Fort Augustus and Urqhuart Castle, the buses wait as the tourists take in the splendid views, stretch their legs and perhaps indulge in some local cuisine. Of course, you can do these things at Loch Lomond, but it doesn't have a monster. The creature is plastered everywhere in forms which draw in the eye and the wallet, but has little to do with what the actual creature looks like.

Meantime, businesses around the loch invite the tourist into their shops to inspect the tat and garish items that fill their shelves. If a green, fluffy Nessie is not to your liking, then perhaps a Nessie adorned mug or a Nessie T-shirt or a Nessie figurine or ... well, you get the picture.

Having lightened your wallet and purchased a memorial of your visit, you may want to risk going onto the loch and see the monster face to face for yourself. There are plenty of boats moored up at the castle bobbing and waiting to take your cash and give you their version of what lies beneath. Some of these crew may believe, don't believe or pretend to believe in a monster, but either way, the monster means big bucks to them and so they're happy to be part of the great mystery.

For me, going to Loch Ness in early August is chalk and cheese to an April visit. In April, the cruise boats are still in hibernation, the roads are quiet and car parking is easy. If you turn up four months later, you are met with bedlam. Fort Augustus car park is likely full, walking along certain roads is like dodgem cars as a phalanx of tourists marches towards you and queues form for various events.

Well, I guess I wouldn't have it any other way, because vast hordes of tourists means there is still an ongoing interest in the Loch Ness Monster amongst the peoples of the world (whatever their view of it may be). And, of course, millions of eyes are trained on the loch armed with cameras ready to snap Nessie breaking to the surface from the deep depths.

I say that somewhat tongue in cheek as the reality is a bit different for various reasons. Firstly, you may have noted the recent story concerning the overgrown nature of the trees along the loch side. Gary Campbell lamented that this was leading to a drop in sightings and even Adrian Shine was in agreement (as far as bare bone eyewitness accounts go). The old postcard below shows the fabulously unhindered view of the loch afforded to tourists and monster hunters many moons ago. 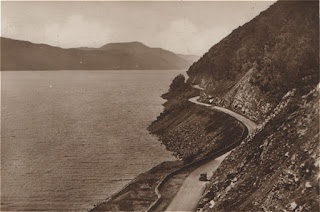 Today, those days are gone as you can drive for miles and only see a loch almost or totally obscured. Laybys are being increasingly added and so the situation will improve, but the days of drive-by Nessie sightings are largely gone. The situation for the monster hunter is different to that of the tourist. The cryptozoologist seeks places for surveillance and is generally unconcerned about tree cover as he or she will find the open views they need.


The tourist is in rather more of a hurry. Tour buses have schedules and so times at the loch are of short duration and generally at fixed locations such as the Castle, Fort Augustus Pier and one or two other places. Those in cars will have more freedom, but very few of them are going to sit down by the shore and scan the loch for extended periods of time.


The point is that even if the average "eyes on loch" time of a tourist is only 15 minutes, multiply that by half a million per year and that adds up to a rough and ready estimate of over 5000 man days per year. Of course, that is not unique "eyes on loch" time as several hundred pairs of eyes looking at the same spot, such as Urquhart Bay, is a lot of wasteful duplication and may be no more effective than 50 pairs of eyes doing the same thing.


Moreover, if Nessie decides the quiet stretch between Foyers and Inverfarigaig is her favourite spot, far less eyes will be on those few miles than the Castle area. Nevertheless, the tourist is an important part of evidence gathering, even if those mobile phone cameras are not up to the job.

As for me, I think I will be far from the maddening crowd this Summer as I plan to be at the loch in late September rather than late August. All the schools will be back to work, the weather will be chilling a bit but it will be peace, perfect peace.