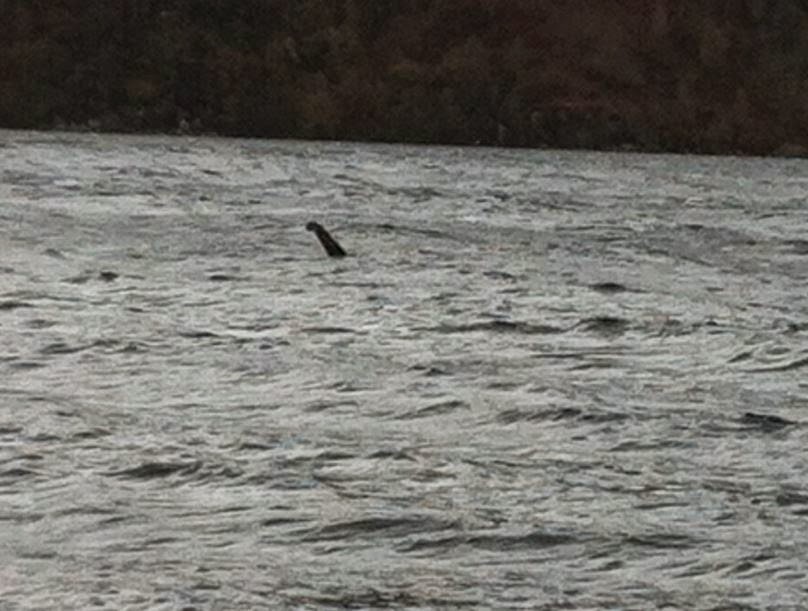 Monster fever mounts that little bit more as a new video purporting to be of Nessie appears in the Scottish Daily Record. It was taken by Richard Collis on Thursday, 6th November as he was motoring about a mile north of Fort Augustus. He caught sight of an unusual object 150-200 metres out in the loch and got out to take the mobile phone footage which you can see on the Record website. I post an image from that clip above.

I have not had much time to look at it at all, but it has the classic head-neck pose beloved of monster researchers. The object appears to rise and fall in the water. How much of that is due to increased wave action or the object itself, I am not sure, but it looks to me like part of it is due to the object moving and not the water. Whether the object itself is moving across the loch is hard to tell, but there is a branch in the foreground which can help further analysis. Certainly, at that distance out, the depth is easily 200 feet, so we would expect the object to be at the mercy of the rough waves - unless it had it own form of propulsion.

But what is it? Branch, bird, debris or monster. You decide! 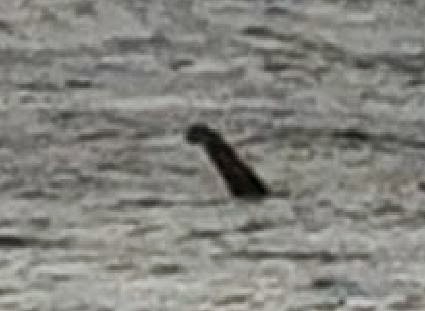 POSTSCRIPT: I got an email from Jonathan Bright who was on site that week who took the image below while he was there.

He adds the following:

I have seen this during my investigation of the Loch the previous week -on 6th afteroon to be exact, as I was coming back from a cruise from Fort Augustus- and as I have also said to the editor of the article, I can assure you that it's not the Loch Ness 'monster'. It looks like a tree log or branch, most possibly put there deliberately (it's just across the road from a lodge), either as a reference to the Surgeon photo, or, just a prank. (it would be interesting if it was not 'man caused' though)

We stopped and filmed this for sometime as an example of potential misidentifications...

It seems really strange that the photographer did not realize this, since the object was clearly fixed at this position and was not getting carried away by the waves and current but only moving up and down...

Steve Feltham also sent me this photo of the stick from the other side. It was taken by Marcus Atkinson from one of his cruise boats which comes out of Fort Augustus. You can see it to the right. 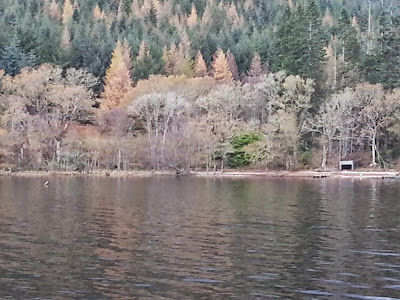 I would also note, against the backdrop of recent discussions about mobile phone evidence, how poor the quality of the image is. In fact, too poor to make informed judgements. The photographs are better but a video with the crispness of such pictures is always better.

From the Daily Record:

TREE planter Richard Collis captured this amazing video on his iPhone after he spotted something unusual while driving alongside the loch last week.

AN Astonishing new video claiming to show the Loch Ness Monster has surfaced.
Tree planter Richard Collis captured this amazing video on his iPhone after he spotted something unusual while driving alongside the loch last week.

He said: " I was travelling along the side of Loch Ness, saw something out the corner of my eye, pulled over and went down to the Loch and took some photographs.
“As I was watching, I was thinking what the hell is that!
“The loch was quite rough and I wanted to get as best a picture that I could possibly get because I knew it wasn’t going to last forever.

“It was about roughly 150-200 metres out in the water on a stretch about a mile from Fort Augustus heading towards Invermoriston.
“It’s quite difficult to know how long it lasted but it felt like a couple of minutes.”
The footage Richard shot was filmed last Thursday and appears to show a creature swimming through the choppy water.

The photographs taken last week look eerily similar to the famous Surgeons photograph of Nessie which was later exposed as a hoax in 1993.

Richard, 58, was so shocked by what he saw he immediately called his wife Vibeke.

He said: "She thought I was having a joke and I said ‘No no, I’ve got mobile phone footage of it’ then when she saw it she said that’s strange.

“It’s similar to the Surgeons photo, that’s what I thought was weird. To me it looks like a long neck and a small head. Like a serpent - the old highland name of it was sea serpent or water horse.
“What do I make of it? I just think it’s an anomaly that I can’t really explain. I’m a bit of a doubter of a lot of things until I see it myself and I wouldn’t have believed what I saw if someone else was telling me.

“I’ve fished the loch man and boy and I haven’t ever seen anything like that. As I say I don’t really believe in anything like that until I see it but what I saw was obviously what the Loch Ness Monster is - I’m not saying it was a fire breathing dragon and I never saw teeth or anything like that, but I must have thought there was something there if I stopped to take pictures.

“It’s like seeing a UFO or something like that. I’ve seen what potentially could be the Loch Ness Monster. I’m excited about seeing it and I’d like to see it again.”
Richard’s wife Vibeke, 60, added: “I’ve been here 37 years and my husband has been here his whole life, so we are completely aware of how unique this is.

“I couldn’t believe it and laughed when he showed me because I knew he could never set that up. He’s not very technical or not very computer wise either.

“I couldn’t believe it because when you live here everyone wants a shot, even if it’s a log, but the thing is it does not look like a log.

“It’s definitely not a seal because it’s got a really long neck and it’s too round and smooth to be a log and why would it bob the way it does and then just go away.”
She added: “I can’t believe that my husband managed to get this. It is amazing.”