I spotted this one on the CFZ blog and thought it worthy of passing on to readers. Strictly, this is a not a Loch Ness Monster event as it did not happen in Loch Ness. The claimed sighting was in Findhorn which is a village further along the Moray Firth coastline (check first map below for circled location with Loch Ness in the bottom left corner).

Nevertheless, I have addressed this subject of Nessie-like creatures being seen around the Moray Firth in a previous article and we can now add this one to that list.  My own opinion was that it seemed unlikely we had several different species of cryptids in the same small locality (Loch Ness and up to the adjoining sea). So Celia could be right in claiming this as a sighting of Nessie. I thought things were a bit quiet at the loch this year, was Nessie away on vacation?!

So, Celia Hawe has put together a video clip of her experience which is a good way of getting her story across. I do not think she is pulling our collective leg and I have no reason to doubt her sincerity - especially as practically all hoaxers are men. The object she saw certainly sounds like a classic Loch Ness Monster with its long neck and single hump.

She also says she regularly watches the wildlife and boats on the waters, so it seems unlikely she was fooled by any of these objects. Of course, it cannot be entirely excluded that some normally recognisable object in an unusual context was involved but the duration and proximity of the sighting would exclude many of the usual "suspects". Until a sensible and alternate explanation is forthcoming, I will leave that aside. 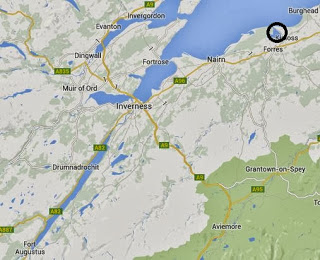 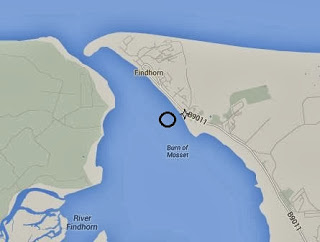 She further puts up a general view of the bay in the video (below) and you can just see her PC cursor pointing to the area where the object was observed which is more or less just above the line of the bushes. The object then disappeared behind the treeline. Unfortunately, Celia did not have a camera to hand during the sighting, though given her comments about being "mesmerised" by the sight, I wonder if she would have remembered to use it! 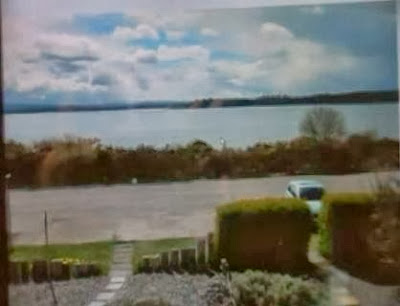 The position of her bay photograph can be located using Google StreetView. The first StreetView image shows the same tree and distant view of the waters.  It seems the bay was not as busy in April than the StreetView shot taken in warmer months. 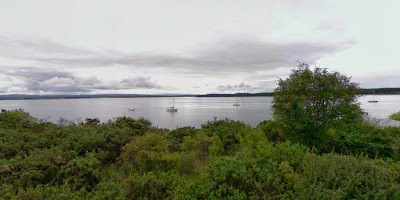 A look at the bay on the other side of the trees shows a beach. One wonders if the houses closer to the shoreline were occupied at the time and had seen anything?

The comment by Celia that the head-neck took on a twisted kind of appearance is one I personally find interesting as I have commented before on the extreme flexibility of the Loch Ness Monster's signature profile. I still wonder if it really is the classic neck with bony vertebrae that is normally assumed. I have sent a message to Celia hoping for more details and perhaps a sketch, so watch this space.

So, I will call this an honorary Nessie report. But if this was a genuine sighting, what was the creature doing in this enclosed bay? Why did no one else apparently see this creature? Could it be that this bay conceals the entrance to that infamous tunnel that connects Loch Ness to the sea?

Am I over-indulging in speculation? Considering such a tunnel would be over thirty miles long, I may well be. But if I had scuba-diving gear, I know where I would be heading for my next session!

Celia got in touch with me and explained that she tried to draw what she saw but gave up confessing she was useless as an artist.  That's a pity but I am sure that if Celia was making all this up, she would have come up with some kind of picture!

She also added this interesting postscript to her experience which this time involved her husband as they were packing the car for a pre-dawn trip to England:

It was dark still, then we heard this noise, once, it was like nothing we have ever heard before. It was scary but we just had to carry on with what we were doing and get going as it is such a long drive. We of course discussed it later. What it could have been.  We went through everything we could think of. Drowning dog, seal, everything we could think of, But this sound was, and I use this word carefully, unearthly. It was incredibly loud, deep and reverberated over the water. I had no idea at the time at what level the bay water was at, but later checked and at 4.54am it was full tide.

Make of that what you will!