Nessie on Land: The Fordyce Case 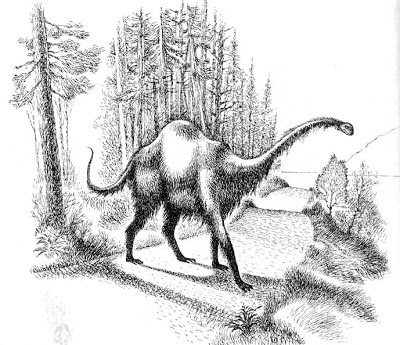 This strange tale is told by the witness, Lieutenant McP Fordyce, as he related it to The Scots Magazine back in June 1990. This account took place a year before the Loch Ness Monster first began to appear in newspapers.


In April l932 while living in Kent, my ﬁancee and l travelled to Aberdeen to attend a family wedding. At the conclusion of the function, rather than return south straight way, I decided to show her a little of my native land. We cut across to Inverness where preparations appeared to be in full swing for a Highland Gathering.

After dinner in the late evening we took a stroll through the the town. and saw men in shop doorways and at street corners practising on their bagpipes. The air was full of sublime music (my version), rent with strange, wild sounds (her description although she never expressed it at the time!).

The following morning we set off on our journey back to England. The weather was fine, a beautiful spring day, and we had a lovely run by the side of Loch Ness as far as Foyers where we spent a short while admiring the famous waterfall. Shortly after leaving Foyers, the road to Fort William turns away from the lochside and runs through well-wooded country with the ground falling slightly towards the loch.

Travelling at about 25 mph in this wooded section, we were startled to see an enormous animal coming out of the woods on our left and making its way over the road about 150 yards ahead of us towards the loch. It had the gait of an elephant, but looked like a cross between a very large horse and a camel, with a hump on its back and a small head on a long neck. I stopped the car and followed the creature on foot for a short distance.

From the rear it looked grey and shaggy. Its long, thin neck gave it the appearance of an elephant with its trunk raised. Unfortunately. I had left my camera in the car, but in any case I quickly thought discretion the better part of valour and returned to the vehicle. This strange animal occupied our thoughts and conversation for many, many miles and we came to the conclusion that it was an escaped freak from a menagerie or zoo. We felt that a beast of such tremendous proportions would soon be tracked down and captured.

Apart from scanning the national papers for some time in search of mention of the creature, we let the matter rest. I told other members of my family what we had seen and they urged me to publish the story,  but I have not done so until now.

At the time of the sighting we were quite unaware of there being anything strange in Loch Ness, but in the autumn of that year, stories started appearing the Press of an unusual animal being seen in and around the loch. It was the spring of 1933 that the term “Loch Ness Monster" came into general use.

Lt. Fordyce (pictured below) then explains how he eventually sent his account to the magazine editor and his own theories concerning the beast. 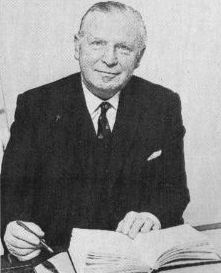 The question the article itself raised was "Shouldn't the Loch Ness Monster look like the creature below" to which it helpfully provides the reader with a populist picture of Nessie (below). 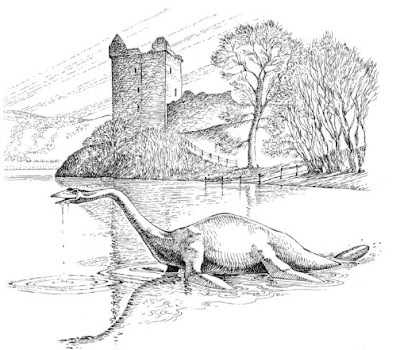 Well, I guess the monster should look more like the second picture than the first, but when I first read this account my initial reaction was "statistical outlier". Consider a mathematician plotting a set of measurements on a graph. The points will tend to cluster around a point, line or curve and some deductions can be made based on that. However, it may be that for some reason one data point is way out of line and is ignored in the final assessment. That is, you don't draw your curve to take a detour round this one point. However, Lt. Fordyce is a person and not a statistic!

Looking more closely at the account, I had two guesses at the witness location based on Fordyce's statement that the animal was 150 yards ahead having entered well-wooded area beyond Foyers. These are shown below marked "A" and "B". I have driven through this forest many a time and it is quite a winding road and so 150 yard stretches are not frequent. Note however that the creature would have a mile walk as the crow flies back to the loch - and that across some hilly terrain! If it followed the river, it was even further and it is not clear to me whether it would have had to negotiate the waterfall at Foyers. 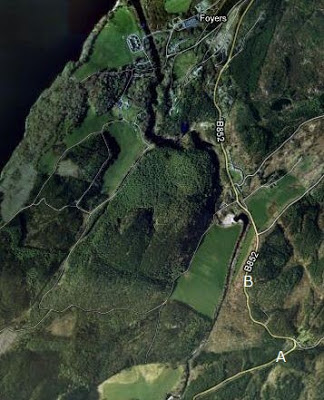 Deer are a common sight wandering across the road and I have seen them myself. It is highly unlikely deer could be mistaken for what Lt. Fordyce described. I did wonder if he had seen an escaped dromedary camel from one of the circuses that were visitors to Inverness in olden days. The lieutenant described it as grey and indeed you can get a grey looking camel (below). However, a scan of the Highland newspapers of the time on the Ambaile Highland Heritage website carries no stories about escaped camels though it is not inconceivable that there was some exotic pet owner frequenting the area (it was reputed that somebody kept crocodiles near Loch Ness in the 1930s!). It is clear however from the account that Lt. Fordyce knew what a camel looked like. 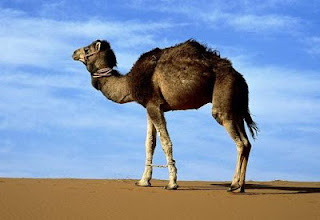 So what did the lieutenant and his fiancee see in those pre-Nessie days? Lt. Fordyce offers the opinion that Nessie is an amphibian and that monster hunters should turn their attention to the Monadhliath mountains in the pursuit of the creature. Amphibious theories are not new to the Loch Ness Monster debate, but the assumption behind these views is that though the monster can take to land, this is the exception rather than the rule. Lt. Fordyce seems to be reversing the land-water priority here.

Now as far as I know, Lt. Fordyce is the only person I have read who has espoused this unique view of the Loch Ness Monster. But, for the sake of argument, let us speculate upon such a land-based creature. One argument against this theory is that the monster has been reported multiple times as having flipper type appendages which clearly points to an aquatic based animal. However, the waters are somewhat muddied by other reports which report short, squat like legs with an occasional reference to hoof like extremities. I have my own explanation for that which will features in a general article on Nessie morphology at a later time, but this sighting with its longer legs could not be so explained.

In fact, one other account does mention somewhat long legs and that is the MacGruer land sighting from around the time of the First World War. Such a description has been put down to the person being an unreliable child witness, but should we be so dismissive in the light of the Fordyce case?

However, at one level, a land-based creature which makes the odd forage into the loch would explain the relative rarity of sightings as it would transpire that it actually spends most of its time on land! But the flip side of this argument would then ask why this creature has not been spotted in the Monadhliath mountains?

The area itself is a pretty bleak mountain range extending east from Loch Ness for about 20 miles to Newtonmore and extending approximately north and south for a greater distance. It's heights can be covered in snow for long periods. However, the range hosts four munros (mountains over 3,000 feet high) which would prove an attraction to summer hillwalkers and there will be some walking routes at its fringes such as near the town of Newtonmore. There may also be some deer stalking going on at various times as well. 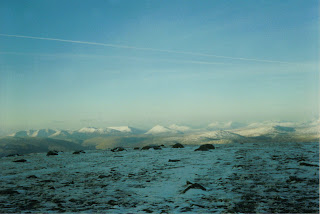 However, by and large it is a wilderness that is not frequented by man and it is possible for a creature of such a size to stay mainly hidden. Nevertheless, one would expect something to have been seen over the last 100 years or more, even if such a beast could be mistaken for deer at longer distances. So far, I have come across only two such stories of strange beasts walking those barren hills.

The first is the famed Fear Liath Mor in the old Gaelic or the Big Grey Man of Ben MacDhui. Like our Fordyce report, it is reputed to be a large, dark and hairy creature that stalks walkers on Scotland's second highest mountain. Unlike our hairy Nessie, it is also reputed to be humanoid in shape. However, Ben MacDhui is not quite in the Monadhliath mountains being slightly further east. You can read more about the Big Grey Man here, but suffice to say it does not quite sound like what we are looking for.

The other more relevant reference is found in “The Popular Superstitions of the Highlanders” by W. Grant Stewart in 1823. It is a story which begins with these words:

... there was a most mischievous water-kelpie that lived in Lochness, and which committed the most atrocious excesses on the defenceless inhabitants of the surrounding districts ...

The Kelpie was an aquatic beast that also inhabited terra firma in search of victims. Moreover, we are told that the hero of this story, Gregor MacGregor, met this devilish nemesis

one day as he was travelling along Slochd Muichd, a wild and solitary pass on the road between Strathspey and Inverness ...

The Slochd Pass is still known today and is at the north east extremity of the Monadhliath mountains near the modern A9 road to Inverness. So, one may argue that ancient and modern lore meet in MacGregor and Fordyce's account of a creature both at home on land and in water.

But I evade the ultimate question, how can we account for this sighting? Do we take the easy route of the sceptic and just say he saw a deer in a heat haze? That is so easy and tempting to say.

Or do we suggest the account was misremembered after 58 years and was more Nessie-like than he suggests? But then again, who is to say he did not write down the account at the time for future reference?

Perhaps the artist's impression was off the mark? I would love to see the actual basic drawing that Fordyce submitted to the staff artist. Indeed, Fordyce mentions an article on land sightings he had read in the past and states that his sighting was "very similar" to some of them. That article mentioned a range of classic land sightings, so one wonders how diverse Fordyce's sighting really was?

In the end, I can't say. To suggest there is another strange species of creature in the area stretches even my credulity but to go to the other extreme and offer half-baked fob-offs is not much better.

One thing is for sure, if Lt. Fordyce really did see what he described, it turns the biology of the Loch Ness Monster on its head.