From time to time, readers will send in various items of interest pertaining to the Loch Ness Monster. That includes shots taken of objects at Loch Ness on the popular webcam found at this link.

So it was that from the dedicated army of webcam hunters, a Nessie watcher by the name of Ed provided me with a sequence of 40 snapshots he took on the 5th April 2012 between 1020 and 1036.  With a little help from some GIF file processing software, I managed to concatenate the images into an animated GIF which gives the files a video like quality. Click on the first image below to see the entire video properly.

Now it may appear that this is nothing more than a blob and in all likelihood just a boat heading north (Ed was willing the object to submerge before it disappeared past the hill!). However, apart from the interesting exercise of creating such an animation, there is something else eye catching about this object and that is the fact that it is changing its appearance in the animation. The video below is a zoom in of the object and allows you to see more detail. If you click on the video icon and then click the bottom right hand corner to go full screen, you will get a good view of the changing aspects of the image (you can also zoom in on the GIF file above if you open it in a new tab and type in a few "control +" characters).


As you observe the object, you will notice it seems to "grow" to the front as it makes progress up the loch and then go back to the "dome" appearance. If this was Nessie, you would conjecture this was the front part of the creature briefly surfacing and submerging again. The difference in the two is shown below - dome-like and then extended.

An attempt can also be made to estimate the speed of the object. We know the time elapsed is about 16 minutes and the object is roughly mid-loch. By projecting a line in the first frame through the object to the opposite shore and again as it disappears behind the hill, an estimate of distance and hence speed can be calculated. I estimate it travelled at least a mile giving a speed of about 4 mph but a final answer also depends on the webcam elevation and the precise distance to the object (the Google 3D map below give rough idea where lines AB and CD are possible object routes).

The other curious feature is the lack of a wake from the object. You would expect it from any motor driven boat but nothing is readily apparent in the animation. Once we get some dry days at Loch Ness, I will see if I can spot a boat in a similar situation on the webcam and report back. So what is going on here? Is this a crazy boat rotating about 360 degrees as it moves north? That seems unlikely. Is it a rowing boat which may account for less wake but again how do we account for the changing shape?

There is a long boat that goes up and down Loch Ness which is quite fast and manoeuvrable and that is the RIB boat that leaves Fort Augustus (below). However, it tends not to go north of Urquhart Bay and you can see that it would leave an easily discernible wake on the picture. As an aside, the boat cruising season had not yet started on Loch Ness when this webcam sequence was taken. This was Thursday April 5th and official cruises did not start until the Easter Weekend the following day. So, using a cruise timetable to pinpoint a boat in the area would be a bit haphazard (although I do not doubt some dry runs at "unofficial" times may have been happening). It is also to be noted that a lot of boats that cruise Loch Ness are white.

The other theory would be video artifacts in the image which could give it an extended appearance. I am not convinced of that explanation - especially when the image extension happens at the same point more than once.

Another objection may be why no else saw this object plainly moving up the middle of the loch for at least sixteen minutes? I would reply, how do we know no one else saw it? It is my belief that the majority of witnesses to strange things in the loch never report what they see or they do but it is never published.

On the flip side of potential witnesses, the tourist season had not started (as evidenced by cruise companies not running) and the rush hour was over so traffic volume was lower. Also note that so called loch observers who speed their way along the A82 carriageway are not focused on the loch and neither should be for road safety. A quick glance at the loch at a dark object may be simply ignored and dismissed as a boat. I would also add that the road at that point above the object is very high and the object was not likely visible from many points along the road (unless you got out at a layby).

So did anyone else see something? We simply don't know.

Or perhaps it is a trick of the light as the sun plays upon the surface of the object? A run of my favourite solar position calculator gives the position of the sun on that day and time. The sun is to the right of the webcam and so the object is somewhat in shadow. Could the sun be blanching out the front part of the object at various intervals due to that part being more reflective? The sun position does not suggest it and if this were the case, I would still expect to see a lighter area of pixels where the "extension" would be and be readily distinguishable from the rest of the object and open water. I don't see this in the sequence of images. 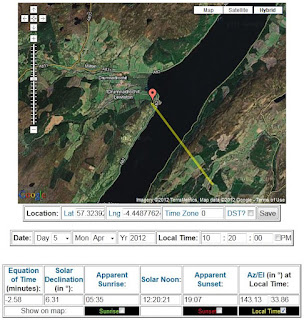 By way of update from a comment below from Tim, could the extended part simply be the shadow of the object? I thought about this and noticed some problems with this theory. Firstly, if you observe the sky in the top left, it gets steadily darker toward the end of the sequence but the form of the shadow does not seem to follow it. Secondly, why would the shadow completely disappear? Surely the sun's degree of shining is not that variable? Thirdly, if it was a shadow, then it is too long for that time of day. The elevation of the sun in the solar calculator is given as 33.86 degrees. A simple trigonometrical calculation shows that a shadow would be no longer than half the height of the object. However, the enlarged image above suggests the "extension" is longer than the height of the object. So, we conclude it is not likely to be shadow.

There are two other interesting points to make in concluding. Firstly, there was another reported sighting of something unusual in Urquhart Bay only 17 hours before and you can read that incident here. It would indeed be strange that the only two known "Nessie" incidents over these past 260 days of 2012 would be so close together!

The other point is that when examining the sequence I noticed another object making its way in the opposite direction! If you look at our dark object at the beginning of the sequence and look to the right and slightly up, you will see a whitish object which is presumably a water disturbance moving south and which disappears before the end of the animation. What is this, you may ask? Was it birds disturbing the surface or some other animal just breaking the surface as it moved? Comments and suggestions are welcomed.

So we have an interesting sequence of images here. As luck would not have it, I turned up at Loch Ness the next day! It seems spotting the Loch Ness Monster is often more luck than judgement.

But has Ed captured the Loch Ness Monster on webcam or is there the usual (and inevitable) alternate explanation for this strange image? You be the judge, I'll put it in the log of reported sightings for 2012.