Will Kevin the Witch make a return to Loch Ness?

Is Kevin Carlyon, Britain's top white witch and "High Priest of Loch Ness and Protector of Nessie" about to make a return trip to Loch Ness? According to the Aberdeen Press and Journal, he is due to make a return trip to the loch to "charm" Nessie out of it. He is convinced that the recent photograph by George Edwards merely shows a log and he reiterates his view that Nessie is a ghost-like paranormal phenomenon.


His first trip to Loch Ness was in 2001 to confront Swedish cryptozoologist Jan Ove Sundberg who was attempting to capture Nessie in a net in shallow waters. The two had a spat as their conflicting agendas came to the fore in front of the media (see clip below).

But apparently his spell to hide Nessie from Sundberg proved to be too successful as sightings dropped off and Kevin had to return on the 13th June 2003 to persuade the creature to come back. How successful that was is not certain but sightings certainly did pick up over 2004/2005 and Nessie must have seen Kevin coming because there were three sightings two weeks before on the 1st June! Given that there only seems to be one sighting this year so far, perhaps his services are required again.

Whatever you may think of Kevin, he certainly continues in the line of the oldest Nessie creed. By that I mean the centuries old belief that Loch Ness is inhabited by a supernatural creature called the Each Uisge or Water Horse. Whether one uses the word "supernatural" or "paranormal" is a moot point but the main idea is that the Loch Ness Monster is not a normal biological creature. How one frames that argument is open to debate. Kevin Carlyon may depart from other like minded people such as Ted Holiday and Tony Shiels on the finer points of the theory and indeed the old Highlanders may yet have had further to say on the matter.

For example, the ancient inhabitants around Loch Ness would be in no doubt that the creature was physically solid but also had some of the ghost-like attributes promoted by Kevin. Moreover, the origin of the creature may also evoke further speculation as some may see it as the product of the mind's psychic abilities while older beliefs firmly point towards Satan as its ultimate commander. Going back even further in time before Christianity would no doubt bring us into the realms of water spirits and pictish gods.

On a similar note, I picked this link up about the sorcerer Aleister Crowley (below) entitled "Did Aleister Crowley Unleash Demons at Loch Ness". It is accompanied by a rather creepy video re-enacting some of his ritual there to tap into forces which he probably shouldn't have bothered with. In answer to the question about unleashing demons, the answer is likely "No" and how would we know anyway? 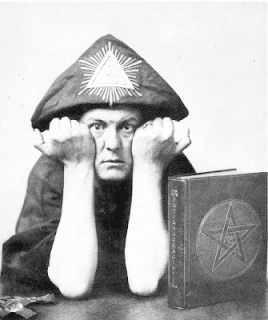 Crowley had no knowledge of a beast in Loch Ness during his time there between 1899 and 1913, but then again, he did not exactly mingle with the natives to get the local knowledge. However, it is curious that of all the places he scoured in Britain for his supernatural portal, he should alight upon the shores of Loch Ness in an area which just so happens to have had the highest concentration of kelpie lochs. Oh well, I am sure there is a perfectly rational explanation!