A Strange Sight in Loch Duich

Whilst perusing some old copies of the popular Scots Magazine, I came across this in the Letters page of the November 1959 issue.

I was interested to read the article about Killer Whales (September issue). In July 1953, when at Letterfearn, I took a photograph of a strange creature in Loch Duich. I saw the dorsal ﬁn several times as it travelled - quite fast - ﬁrst up the loch (to the right of the picture) and then down.

I would estimate the distance from the shore at about thirty yards, and the height of the ﬁn at two feet or more. Since reading J. L. Campbell's article I have wondered whether it was not a Killer Whale that I photographed. I would say it had most of the characteristics ascribed to the Killer Whale. The whole aspect of the animal and its movements were belligerent beyond doubt, and had I been in a small boat in its path my first reaction would have been to get as far away from it as possible.

Its movements in Loch Duich recalled these of an otter in a river pool - to seek and kill on sight. Unfortunately, it did not surface sufficiently to allow the skin markings to be seen. It came up only when it had to, and went straight back to the job on hand which seemed to absorb it completely. 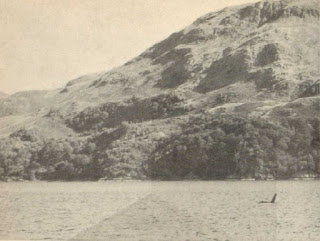 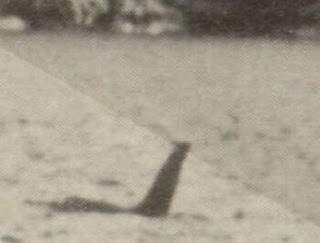 The pictures above are what Mr. Findlay took that day. Admittedly, if he had not stated what he saw in detail, we would be left with a photograph that would be described as a serpentine head and neck by some. However, the blunted top of the appendage plus Mr. Findlay's own account of its motion does indeed suggest it is a killer whale of some description. In fact, some of the blighters were shot (with a camera) in hot pursuit of dolphins only a week ago further up the Scottish coast. See article and photograph here.

Of course, killer whales have never frequented Loch Ness at any time, so we do not include them as an explanation of Nessie sightings.