In my new book, I explore the various "satellite" lochs around Loch Ness which had traditions of water horses, water bulls and kelpies. I recently covered one such body of water in Loch Duntelchaig (link) but another caught my eye as I drove past it on my summer trip to Loch Ness. I did not cover this loch in the book mainly because no written tradition exists - unless you are prepared to dig a bit deeper.
I am speaking of Loch Tarff which is on the south side of Loch Ness. You encounter it as you head north to Foyers on the B862. Having ascended the steepest incline around Loch Ness, you head downhill to a dip and the loch is on the left. I took this picture at the time. 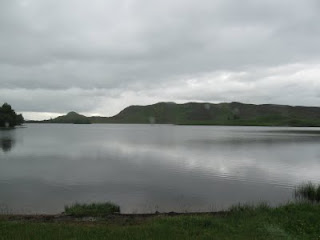 There is nothing to recommend the mysterious about it apart from that general gloominess which descends on such lonely places under cloud. It was apparently used as a skating rink by the boys of Fort Augustus Abbey's school in decades past but not much more can be said about it apart from its name. The word "tarff" is a transliteration of the gaelic word "tarbh" meaning bull. This has significance because place names often have something to say about the place itself. In this instance I suggest that this place had a tradition of a water bull inhabiting its shallow depths (as other authors have suggested for "tarf" rivers or lochs).

Indeed, its maximum depth is about 90 feet (though the mean is 24 feet) and it is about 960 feet above sea level. Its dimensions are half a mile by about one third of a mile in a roughly triangular shape. Not a lot of space to sustain a Tarbh Uisge one may say but then again it is not alone in that attribute.

So I add it to the half dozen or so satellite kelpie lochs around Loch Ness. One final note concerns a river one encounters as they drive back down the hills to Fort Augustus. It is the similarly named River Tarff that empties into Borlum Bay beside Fort Augustus Abbey. This river begins its course further south in the Glendoe region and flows through Glen Tarff towards Loch Ness. The headwaters have been dammed to now form part of the Glendoe Reservoir for the Glendoe Hydro Power scheme. However, the waters of the river and loch Tarff are not directly connected. 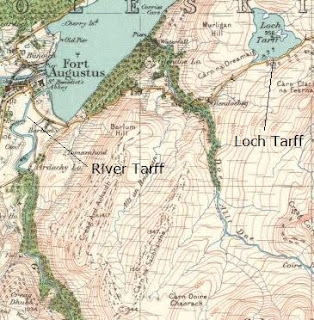 One would presume that a river and loch of the same name and seperated by only a couple of miles would be related in folklore and perhaps they are but as yet I have found no evidence. It seems this small south eastern corner of Loch Ness has more of the Water Bull about it than the Water Horse. One wonders, did the local residents occasionally see the water bulls of Loch Ness head out of Loch Ness along this river and hence decided upon this name? After all, the River Ness and Garry are blocked by canal locks and other Loch Ness rivers rise quite steeply.

One can only speculate!