The tourist wars hot up again at Loch Ness as the owners of the Loch Ness Centre and Jacobite Cruises clash over the development of visitor facilities only 800m apart on the north part of the shore. Robert Bremner who owns the once named "Official Loch Ness Exhibition Centre" in Drumnadrochit is not long out a legal wrangle with the once named "Original Loch Ness Exhibition" over naming rights and the potential confusion for visitors to this small town.

But having cleared that hurdle he now wishes to extend tourist facilites opposite the Clansman Hotel but tactically he is at a disadvantage as the Jacobite Cruises proposal (see picture below) is ahead of the game and was going to receive council approval first before his plans two months later. Bremner is set to appeal for both plans to be considered at the same time as not surprisingly the two plans are so similar and so close to each other. As I write this it looks like he has got his way as the council defers any decisions subject to further site inspections. 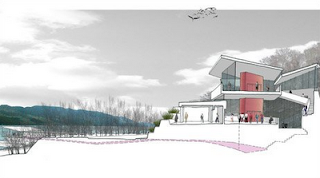 Now tourism is good for the local economy but too much tourism is bad - one only has to take a look at noisy, rubbish strewn Loch Lomond to see that. Loch Ness has been shielded from a similar fate due to it being much further north from the densely populated centre of Greater Glasgow from which you can reach Loch Lomond in less than an hour. Loch Ness is a three to four hour drive and hence prohibitive for a Glasgwegian day out.

Thankfully, Loch Ness is largely devoid of tourist traps, jet skis roaring across the loch and ignorant tourists leaving a trail of debris. On the other side of the loch, the topology and tightness of the roads precludes any large scale development. The two Loch Ness exhibitions just mentioned are well away from the shore line in Drumnadrochit but the two new proposals are "in your face" shore line developments. The commercial win of a shoreline development is clear as no one can see the loch from the Loch Ness Centre and a cup of tea on a Jacobite Cruise ship would be less comfortable than in their proposed visitor centre.

So what do I think of these two proposals? It is ironic in this Nessie-skeptical age that anyone would see fit to commit large sums of money to Loch Ness but clearly the two parties see big cash potential in what they are doing as Loch Ness scenically has a lot to offer. Ideally, I would prefer any development to build upon currently developed ground as we have it at the Clansman Hotel. This would minimise the impact on the shore line and would favour Bremner's plans. However, in the interests of competition and avoiding anyone trying to dominate the Loch Ness tourist scene, I would prefer to see Jacobite Cruises win and introduce some competition in goods and services. However, their proposal involves violating more virgin ground and adding to the tourism skyline.

One thing I would hate to see is both proposals being approved which considering their close proximity would be crazy and I suspect would be detrimental to the bottom line of both companies. For now, I lean slightly towards Jacobite Cruises.

Meanwhile as the big tourist players at Loch Ness vie for the upper hand, a word of congratulations to the Old Manse B&B at Invermoriston which has been voted best B&B on the planet by users of Trip Advisor. See BBC news article here.
Posted by Glasgow Boy at 05:03