The Usse of North England 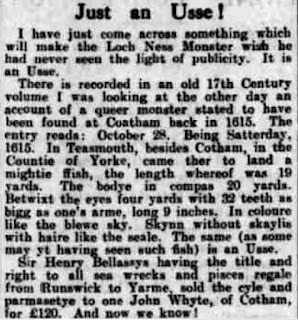 Here is a clipping from the Cleveland Standard dated May 5th 1934. The news of a monster in Loch Ness brought out various interesting stories from the end of 1933 onward as some newspapers vied for attention bringing up stories about their own local monsters both past and present. This one goes right back to the 17th century for one of oldest tales that I have come across. Here is the text of the article:

I have just come across something which will make the Loch Ness Monster wish he had never seeen the light of publicity. It is an Usse. There is recorded in an old 17th Century volume I was looking at the other day an account of a queer monster stated to have been found at Coatham back in 1615. The entry reads:

October 28. Being Satterday, 1616. In Teasmouth, besides Cotham, in the Countie of Yorke, came ther to land a mightie ffish, the length whereof was 19 yards. The bodye in compass 20 yards. Betwixt the eyes four yards with 32 teeth as big as one's arme, long 9 inches. In coloure like the blewe sky. Skynn without skaylis with haire like the seale. The same (as some may yt having seen such fish) is an Usse. Sir Henry Bellansys having the title and right to all sea wrecks and pisces regale from Runswick to Yarme, sold the cyle and parmasetye to one John Whyte, of Cotham, for £120.

And now we know!

The town of Coatham is located near the modern city of Middlesbrough and the creature appears to have been stranded at Teasmouth or in or near the estuary or mouth of the River Tees. The location is shown below in two maps. 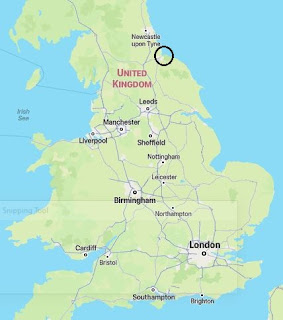 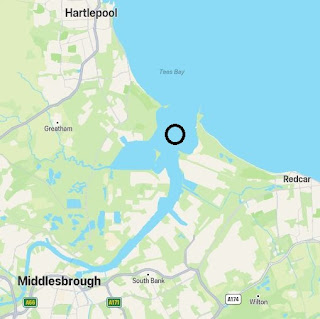 One can certainly imagine big fish stories coming from the East of England bordering the North Sea. But what of this strange beast called an "usse" by this narrator from over four hundred years past? So we have a beast almost sixty feet long, which excludes a lot of candidates right away. The "compass" of twenty yards we presume to be the circumference, in which case if it was a circular body would equate to a diameter of 6.4 yards or nineteen feet across. So the length to diameter ratio perhaps was three to one indicating a bulbous body.
However, no mention is made of our typical long tail or neck associated with the Loch Ness Monster. In fact, perhaps in the manner of a catfish, we have a great gash of a mouth four yards long dominating the front of the beast, which was not far off our suggested body diameter of six yards. Add to this the teeth each of nine inches and we have a formidable beast. With blue skin like that of a seal, what could it have been?
The fact that this was deemed a rare find is shown in the fact it was sold for £120, which is over £30,000 in today's money. This suggests this was something that didn't arrive on those shores very often. In fact, a clue lies in the word "parmasetye" which equates to our modern word "parmacetti" which I am told "is the pearly white, waxy, translucent solid, obtained from the oil in the head of the sperm whale: used chiefly in cosmetics and candles, and as an emollient."
What the other material named "cyle" is I am not sure, but we seem to be in the realm of toothed whales such as the sperm whale, whose teeth indeed can reach up to nine inches as a maximum and sixty feet is easily achievable as a length. They can also be blue-grey in colour. So perhaps not such a competitor to Nessie as first suggested.
As for that old English word "usse", that is the mystery to me. The word "whale" was already in use at that time. In fact, the King James Bible, published at that time uses the word "whale" when referring to some large sea creatures. So why didn't they just refer to it as a whale? Perhaps it was a local dialect used by people from that region? Suggestions are invited in the comments. 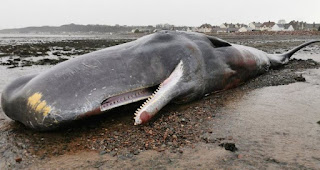