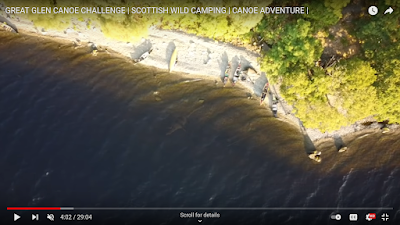 A new image from Loch Ness with a new twist appeared in the media yesterday. By  a new twist I mean a drone video of something allegedly in the waters below. Now I use my drone at Loch Ness in the hope that I will catch footage of something interesting just below the surface, but invisible to those watching from the shore. In that light, I was very curious to see this footage. You can go this link and fast forward to about 3:45 to see something that appears to be just below the water moving towards the shore.

The media story can be found here. I found it to be an impressive looking video, so it was time to ask the owner of the video some questions and I posted it on the Zombie Plesiosaur Society Facebook group to generate views and discussion. This is where the path from impressive to not so impressive began its journey. I first made contact with Richard Mavor who posted the video and asked him some questions. The first was the important one. Could I see the original video file from the drone? His answer on the messenger box is below. 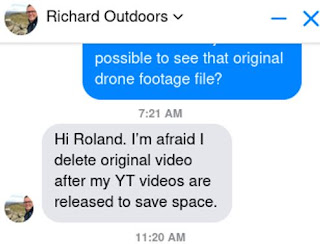 This raised a red flag right away, as will be explained later, but I am a drone user too and have plenty of 4K files from way back. In this day of terabyte storage, why would someone extract a few seconds clip and throw away the record of an important and memorable trip? It didn't make sense to me. But I dutifully asked the other questions and then put a scenario to him. 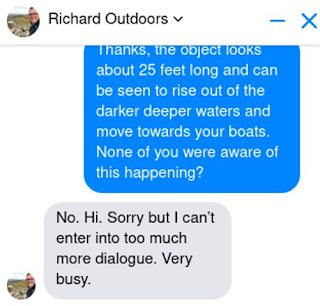 Okay, perhaps they saw nothing, but this creature was practically within biting distance. The ante was upped when it was mentioned on Facebook that two clips from the video showed the same scene, but one without the creature, the other clip being at 1:44. This was demonstrated in this comparison image with thanks to Henry Baker and James Kitwood. It may be a bit hard to see as the image is just appearing, so compare on the actual video if you prefer.

I thought one could also produce a similar split image with no creature in either frame as it was just about to appear giving us split second timing in how to begin each sequence. However, that is just my opinion and for me more was required. That led to the thought that Richard claimed he did not see it at the time and struggled to see it even now (as he said in the YouTube comments). But for me, the creature appearing out of the depths just as this random clip began without the editor knowing about it was just too much of a coincidence.

The next and biggest nail in the coffin was the fact that someone else (Jonathan  Falcone on Steve Feltham's group) mentioned it looked just like the famous Robert Rines 1975 underwater picture of a bulbous body and long neck. Here is the comparison and suggests to me the Rines photo was the template for this one and ironic that one underwater picture leads to another underwater one. It also has to be said that if you observe the rock to the left of the creature's "head", water is clearly lapping over the rock, suggesting the depth where the "head" is must be only inches! 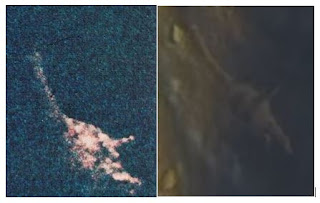 Another and better comparison is by Sam Shearon who thinks the template is a picture of a plesiosaur which is shown below. This looks a good fit, so make your choice as to which was used, either way it's not looking good for this video. 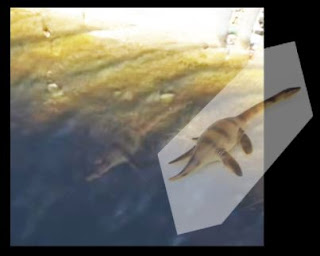 I think that pushes us beyond the realms of coincidence and hence push this video beyond the realms of acceptable. The object moving towards the shore would seem to be a plus against inanimate object theories, but I looked hard to see any movement within the creature itself, I concluded whatever the motion of a Nessie may or may not be, we should expect some flipper, neck or tail articulation. The more unpalatable truth is the Rines photo was the basis for this hoax.

Going back to the lack of original drone files, the deletion argument is not an acceptable answer and comes straight out of the hoaxer play book. Readers may recall the previous hoaxes perpetrated by Ricky Philips and Steve Challice. When both of these people were asked for the original images, they either claimed it was deleted or something which was clearly not the raw image file was sent. The implication being the original files would give the game away. The same applies here.

Also Richard saying he and his colleagues saw nothing when this "creature" was practically upon them is not credible. So taking all these observations into account, we have to once again file this one under "fake". It was suggested Richard would eventually come clean. Perhaps he will, but the hoaxer play book again suggests he won't. Philips and Challice never confessed and my last message to Richard suggests he will not either: 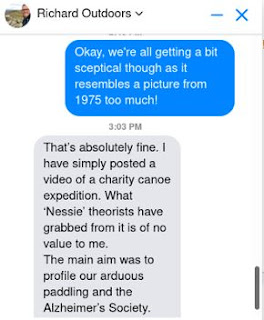 I guess even though they see it as a harmless prank, they don't want to self-incriminate and be put on the record as liars as it may end up on their CVs. After all, how many people plead "not guilty" in court? The TV detective series where the criminal confesses to all at the dramatic end rarely happens in real life. All in all, these hoaxes just create problems for serious researchers. If I produce drone footage next summer with a plesiosaur looking beast moving along, sceptics will point to this video and say "Nah, another CGI!". That raises the bar of proof, but I hope people who know me would treat me differently.

Once again, we ask the question has easy digital image manipulation rendered video-still image evidence worthless? I think the answer is no, but it is clear that the vetting of such images and their owners must be thorough and use all the tools at our disposal. Fortunately, this one took less than a day to expose, so the perfect but fake image would seem to be a project beyond many. But I say that hoping not to tempt fate!