I am currently relaxing on holiday on the fair Isle of Lewis and now have time to get through a prodigious task - getting through the 13,400 or so pictures recorded on one of my trap cameras left at the loch over a sizable number of months until this May.

It is a mind numbing labour, I have to say, pounding the left arrow key to proceed to the next picture which pretty much looks like the previous one. These cameras were designed to take away some of the monotony of sitting by the loch staring at it for hours waiting for the monster to break surface. The problem with this particular make and model is the picture below. 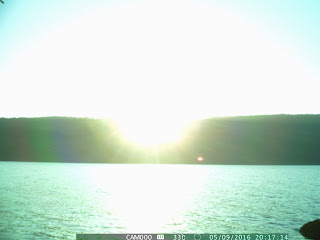 Whenever the sun set in a clear sky across the loch, it triggered hundreds of pointless pictures. The solution is pretty clear, just point the camera further north and avoid these glares. Mind you, the pictures are not so pointless if the creature accidentally appears in such a picture. So far, that has not occurred. Some pictures of interest do appear from time to time as now illustrated below.

Here's some people out on a boat. It looks like they are preparing some fishing rods. A good sized hump would occupy much of the same length to give you an idea of scale. 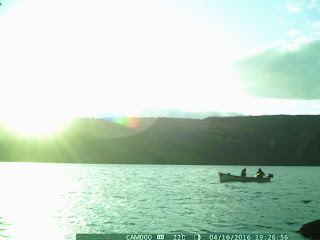 The approach of night gives the loch a darker hue of blue in this picture. 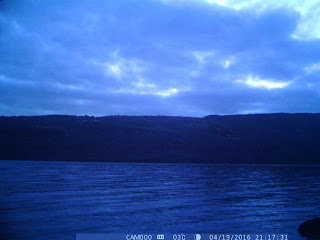 Within ten minutes, the camera switches to infra red and it is into black and white mode. 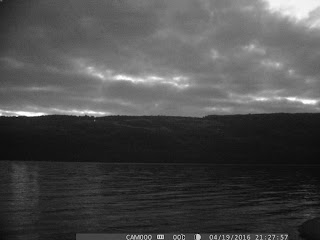 Here is the moon over Loch Ness. 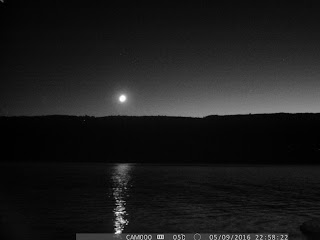 Now what do you think this night shot shows? I do believe this kind of picture has been associated with UFO phenomenon, but I think it is more likely to be an insect travelling more rapidly than the shutter speed of the camera. Well, something like that! 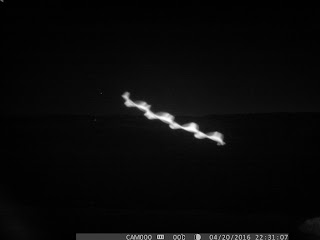 The next picture is a definite life form, but what I don't know! 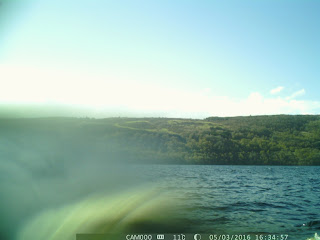 These two creatures are most assuredly known to me.... 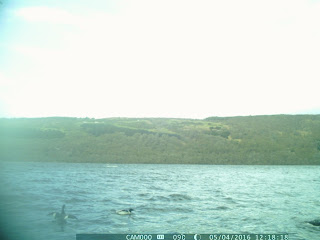 This picture made me wonder if there was a fire in progress on the opposite hills. 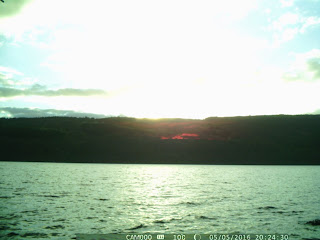 So, about 4000 more pictures to check. With some tweaking for the autumn and winter months, I will hope to obtain only pictures of actual animate, nearby objects. The hunt continues!