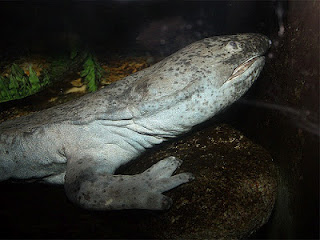 First of all, let me welcome a new blog to the Nessie blogosphere. The author is Steven Plambeck and it is called "The Loch Ness Giant Salamander". You can click here to visit the blog.

You may guess from the blog title that Steven is following in a tradition that stretches right back to the birth of the Nessie story in 1933. Before long neck stories began to dominate peoples' thinking, some held to the view that Nessie was some form of outsized amphibian and in particular the salamander. I am a bit partial to a fish-like amphibian or amphibian-like fish theory myself, so we are in agreement to some degree there. An amphibian has its issues just like any other Nessie theory but I am sure it can hold its own in the Nessie pantheon.

However, Steven has had a further look at the Hugh Gray photograph in this respect and is of the mind that there is more than just one creature in view. I'll say no more and you check it out yourself with his latest article.