It seems Nessie has been brought into the creationism/evolution controversy and the usual invectives that get hurled about ... are getting hurled about. The original story is here but the point is that the creationist teachers presuppose Nessie to be a plesiosaur which is seen as a proof against evolution. I suppose the argument is valid to some degree, plesiosaurs died out about 65 million years ago and if they are found today that would mean dating techniques based on these "key" fossils would be weakened.
But I am not sure that holds since the good old coelacanth was found to be alive and not extinct in 1938 but I do not read of that upsetting paleontologists' dating of rocks/fossils (and I presume most zoologists would be delighted to find a live plesiosaur still swimming around today's oceans). What the creationist Christians need to find is not a live plesiosaur but a fossilised plesiosaur with a fossilised human in or near it. That would upset the scientific apple cart no end, but to date no such thing has been found . 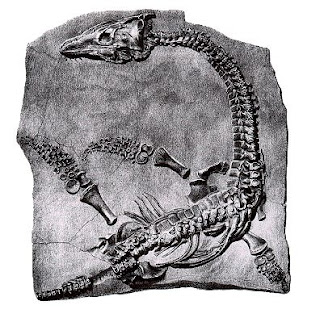 The other problem regarding this theory is that Nessie is not a plesiosaur - or certainly does not act like one. The alleged body shape is similar but that is just about where the similarities end. I would take the personal view that she is not a plesiosaur, sturgeon, catfish or giant eel but something akin to a fish-like amphibian or an amphibian-like fish. It was discussed somewhere else that perhaps Nessie is a highly adapted plesiosaur which does exhibit Nessie-like behaviour, in which case the animal is probably as different from the original as a lemur is from a human and hence irrelevant to this current topic.


Whatever the creature turns out to be, I do not think it will have any bearing on the creation-evolution debate.