Readers may remember the Sun newspaper article from two years ago which claimed to show a strange object on Loch Ness visible from Google Earth. The image is shown below but a close inspection plainly reveals it to be one of the many cruiser boats with its wash rippling in its wake.

However, a couple of months ago, some stranger looking images revealed themselves as I scanned the same Google image of Loch Ness. They were definitely not boats, buoys or logs and had a strange looking structure to them as you can see below. The images are to the same scale as our boat image above. I found all four of them in the top half of the loch and because of the strange "ball" attached to a snake-like "body" they did not look like the micro-debris that may accidentally fall onto the image as it went through the stages from satellite transmission to Internet image. 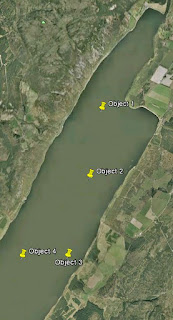 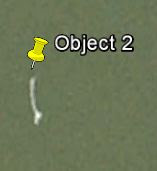 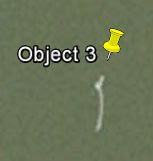 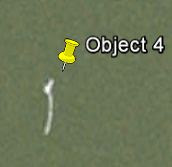 If they really were on the loch then they would be 40 feet long by 3 feet wide, longer than the boat which caused the original interest.
As a comparison, I scanned other major Scottish lochs to see if they had similar images. I checked Loch Lomond, Loch Tay, Loch Maree, Loch Awe and Loch Morar but none of them had anything like these strange images. I also checked the land around Loch Ness but to date have not found any similar image. I asked one local expert what forms of junk may be found floating on Loch Ness but nothing sounded like these pictures. So far, I have no satisfactory explanation for these images. Obviously, if they were Nessies, they have a rather weird shape compared to our traditional "plesiosaur" shape which makes one less inclined to say they are creatures. Nevertheless, an explanation is sought.
All a bit strange and so I turn to you readers to help solve this mini-mystery. You can zoom in on the objects via Google Earth or Google Maps by using these coordinates:
Object 1: 57°23'3.76"N 4°21'30.84"W
Object 2: 57°22'7.29"N 4°21'53.41"W
Object 3: 57°21'3.92"N 4°22'30.19"W
Object 4: 57°21'4.96"N 4°23'37.89"W

Have a look at them and tell me what you think they might be and why (as far as I can see) they only appear "on" the waters of Loch Ness. The possible explanations are image debris, image defect, image tampering, unidentified artificial objects on the loch or something unidentified on or just below the loch surface.
Posted by Glasgow Boy at 05:27