Monster Hunting in The Western Isles

I spoke in a previous post about my Highlands trip last July which took me past Loch Ness and onto the island of Lewis and Harris. I did some research first at home to see whether there was anything of a monster or kelpie nature to take in. To that end, I read Glen Vaudrey's "The Mystery Animals of the British Isles: The Western Isles" which can be obtained from here.

Now this book spoke of two lochs, Loch Suainabhal which had a tradition of a water horse therein and Loch Urabhal of which a sighting of a strange two humped beast was claimed in 1961 (but had no water horse tradition).

Doing some further grubbing about, two more lochs with some kind of monster activity turned up. The first was Loch Ulladale to the south which had a tradition of a water horse but is actually located in Harris. The final one was Loch Bhreacaich south of Stornoway near the village of Lemreway which long time Loch Ness researcher, Dick Raynor, had visited around 1971. Apparently there had been a sighting of some description which sent him westward with sonar equipment and dinghy. Nothing was found and he presumed a seal or otter had actually been involved.

The story of the water horse of Loch Suainabhal seems to come from a story that was copied amongst various publications in the later part of the 19th century but one early source was Lippincott's Magazine of Popular Literature and Science for April, 1873, Vol. XI, No. 25. However, the story is given in the context of a fictional story and a conversation between individuals.

"But I have not told you yet about the Black Horse that Alister-nan-Each saw at Loch Suainabhal one night. Loch Suainabhal, that is inland and fresh water, so it was not a seal; but Alister was going along the shore, and he saw it lying up by the road, and he looked at it for a long time. It was quite black, and he thought it was a boat; but when he came near he saw it begin to move, and then it went down across the shore and splashed into the loch. And it had a head bigger than a horse, and quite black, and it made a noise as it went down the shore to the loch.

Now being a subplot in a larger story may weaken the argument that this water horse was part of a local tradition, but for now we will assume it was knowledge of the local legend that caused it to find its way into this storyline. The locations of these two water horse lochs and two monster lochs are shown on the map below. 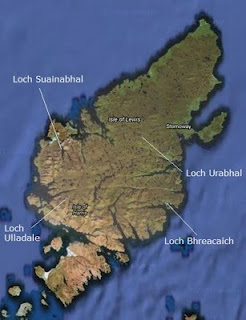 As it turned out, visiting these lochs was more than a simple matter of driving, especially with a family of kids in tow. Focusing on the two lochs with claimed modern sightings, I passed on Loch Bhreacaich simply because there was not enough time. Loch Urabhal it turned out was a three or four mile round trip on hills by foot from the nearest road at the village of Achmore. I once again passed on the opportunity.

Having said all that, lochs with only one claimed sighting of something strange do not quite pass muster for me. For a loch or lake to be taken seriously as a "monster lake" there has to be a consistent pattern of sighting reports. How many reports there have to be to "qualify" is partly subjective but there would also be a time element to allow rogue explanations such as stray dolphins, seals, etc to move on. Seals and dolphins won't explain what goes in these land locked bodies of water, there will be other natural explanations which may or may not prove adequate over time.

Now there may be witnesses to other strange events on such lochs but we need to see the data. In that respect, I was not too enamoured by these two lochs. But water horse stories evoke a more mysterious echo from ancient and simpler times. I drove as far as I could to Loch Ulladale but even from there it was an eight mile round trip hike. Yes, I am a bit of a wimp, but it was after all first and foremost a family holiday.

So that left Loch Suainabhal which is near the famed spot where the Lewis Chessmen were discovered in the 19th century. A small single track road got us there and I spent a few minutes scanning the deepest loch in Lewis. 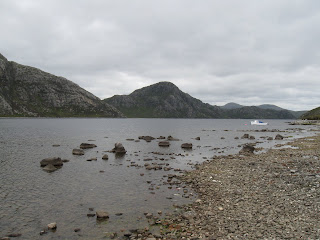 As the picture suggests, it was a lonely but serene and beautiful place. Apart from the boat moored in the distance, it looked untouched though the modern world in the form of Scottish Water had some operations attached to the loch. I scanned the area, took some camcorder footage and breathed in the Atlantic air but even with my Nessie-type enthusiasm, I was not expecting an equine like form to rise menacingly from the depths (though perhaps being there at midnight may have made that feeling more real!).

If there was an Each Uisge here, it is either slumbering at the bottom waiting for simpler times to return or it has flown to pastures new in search of fresh victims.

Either way, we left to re-enage with civilisation and the Calmac ferry.