Is Nessie a Giant Eel?

As part of our continuing "What is the Loch Ness Monster?" series, we come to the idea that Nessie is some kind of giant eel. 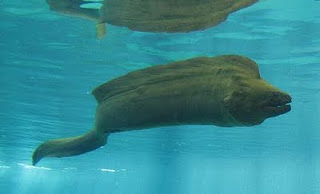 Now when biologist and Nessie hunter Roy Mackal wrote "The Monsters of Loch Ness" in 1976, he produced a table of thirty two Loch Ness Monster features and ranked six varieties of possible animals against them in a check list fashion. When the tests were added up, it was found that a variety of eel which he called the "thick bodied eel" came second in the rankings of animals.

Now this theory certainly ticks a lot of boxes but clearly eels as we commonly understand them cannot fulfill the role of the Loch Ness Monster and even a modified "Nessieel" has issues. The largest known eels are the moray eels (pictured above) which have been known to reach up to 4 metres (nearly 12 feet) in length whereas a typical Nessie sighting suggests a creature up to 10 metres (about 30 feet) in length. The girth of eels versus nessies is also problematic as eels tend to be serpentine in appearance whereas Nessie has a bulky middle portion. Nevertheless, some form of giant eel would stand well against competing theories and would not tend towards the ridiculous as the various features of the Loch Ness Monster are reconciled with what is possible in the animal world.

First, by way of background, it is well known that Loch Ness is teeming with eels. No one knows accurately how many eels inhabit the loch because of their behaviour. This is because eels are classed as benthic or "bottom feeders" in that they tend to live on or close to the surface of a sea or lake bottom. Therefore, sonar devices which can be adept at picking up fish in open water cannot easily pick up eels which stay close to the sloping sides of Loch Ness.

In fact, some eels have been observed half buried in the silt which raises the interesting question as to whether a larger Nessie type-eel could hide unobserved under the 20 square miles or so of loose sediment that permeates the bottom of the loch? The ultimate depth of this silt is not known but up to 20 metres deep has been suggested by sonar and a 4 metres depth has been achieved from core samples before the device hit the clay layer below. Apparently, there is plenty of silt for a large eel like creature to lie in beyond the scans of sonar hunters...

What seems apparent however is that there are more eels in Loch Ness than all the other fish combined. Renowned monster hunter Tim Dinsdale suggested the population was in the millions but so far all photographs obtained of eels on the sediment floor of the loch showed only normal sized specimens. The question for this post is whether something larger relies on this population for a good part of its diet or perhaps even sprung from them?

Stories of large eels form part of Highland story telling as well as newspaper reports. Loch Ness researchers recount tales by locals of 10ft plus eels being caught in the loch when eel fishing was more popular. Focusing on written evidence for large eels in that region of Scotland produced some items of interest. These accounts are taken from local papers:

Inverness Advertiser, 11th November 1851: An enormous eel of 7 feet length, 3 feet 4 inches in girth and 70 lbs in weight was found on the beach of Newton in Aird.

Inverness Journal, 29th January 1813: An eel of 5ft 9in was caught at the pier of Clachnaharry. Two eels of similar dimensions had also been caught in the Medway River.

So large eels have been caught in this region but obviously not as big as required for Nessie. Stories such as the giant eel-like creature found in the Corpach lock at the other end of the Caledonian Canal in 1900 and various other apocryphal tales are tantalising but do not really progress us in the hunt for giant eels.

But what would be the pluses of the giant eel interpretation (assuming a thick bodied variety)?

1. Water breathing animal
This would account for the scarcity of sightings over the years. An eel is not predisposed to regularly venture to the surface of the loch.

2. Bottom feeding animal
Again, this would explain why sonar contacts, though they exist, are not numerous. Our giant eel is a bottom dweller by nature.

3. Lower diet requirements
Not being a warm blooded creature, the energy requirements of an eel are smaller than a mammal and hence suits it more to a smaller body of water like Loch Ness. Also, eels tend to be quite varied in their diet and are opportunistic feeders in that they tend to wait for the food to come to them hence requiring less energy hunting on the move.

4. Humps
Eels tend to have an extended dorsal fin running along their back which could give the impression of humps at the surface depending on how the fin folded along its back. It is even possible though not certain that a pliable dorsal fin could account for reports where the number of humps are seen to change. The whole back of this thick bodied variety of eel surfacing could also suffice as a single hump (though it may require some contortions on the part of the entire body invisible to the witness).

5. Land Sightings
Eels have the ability to travel short distances out of the water which is linked to their migratory behaviour. This could account for some claims to have seen Nessie on the land (though not all claimed sightings look particularly eel-like).

6. Eels live a long time
A useful feature if one goes for the single Nessie theory or minimising population numbers. It is claimed that one eel in Sweden has been alive for over 150 years since it was dropped into a well in 1859 by a kid called Samuel Nilsson in Brantevik.

On the downside, practically all Loch Ness authors rejected the idea of Nessie being an eel. The idea was first addressed by Rupert T. Gould in his 1934 book "The Loch Ness Monster" but was dismissed by him on the grounds that it could not explain the upturned boat effect of many single hump sightings and the long arched neck. Constance Whyte briefly considered it in her book but again rejected the idea (though she mentions that Maurice Burton in his earlier days was favourable to it).

Here are some of the minuses:

1. Eels migrate and die
It is a wonder and mystery of the natural world how eels on their 10th year or older leave their European waters to swim the thousands of miles to the Sargasso Sea near the Bahamas where they breed and then die. It is a mystery because no one seems to have actually seen the eels breed. However, if the Loch Ness Monster is an eel then does it make the journey too? One may assume so but it would not return and who can say that its offspring in the Atlantic Ocean even go back to the same place?

There have been purely speculative suggestions that such a large eel may have somehow become an indigenous breeder and indeed by doing so would extend its lifetime and possibly trigger increased growth. This sounds plausible but alas there is no reason to believe it. But a homebound eel would seem to be prerequisite amongst this unusual eel's adaptions.

2. Eels cannot display a long neck and head
Well, they could if they were about 80 feet in length according to Gould. For an eel to protrude its upper body out of the water would help explain a proportion of this class of sighting. How the eel achieves it I am not sure and I could find no image of an eel doing it. Some adaptions to our Nessieel are required to achieve this. Perhaps an enhanced buoyancy mechanism which for some reason raises the eel more efficiently from its normal benthic domain. Apart from these, I would consider this the weakest part of the giant eel theory.

3. The upturned boat effect
As mentioned by Gould above, some hump sightings require a body much thicker than any known eel possesses. In response to this, Mackal suggested the thick-bodied eel which along with its dorsal fin could achieve this effect.

Now on the general theme of a thick-bodied Nessieel a process of thickening is not unreasonable. As we look at the shape of eels as they increase in size, one does notice a progression from the tubular to something less proportioned. The Moray Eel for example has a thicker front part and given the variety of shapes and sizes amongst sharks one should not be surprised if something out of the ordinary should turn up in the eel world. For our discussion that "something out of the ordinary" requires a thicker middle section and a thinning of the front head-neck section to begin to look like witness reports. Roy Mackal himself envisaged an eel looking like the one below (copyright C. S. Wellek):

Is such a scenario possible? Given the plausible stories we often hear about how one species evolves into another given enough time and resources, one would be tempted to say "yes". What the real world in reality produces is another matter entirely. However, I would not discount the giant eel theory on that basis. In this case, another tick box is required which is common to all Nessie theories and that is the "Credible" tick box.

Apart from one theory, all proposed theories fail to tick all the boxes and fall short in at least one area. In that respect, the eel theory is not alone. But proponents of a given theory may tend to stretch things a bit as they try and make their theory accommodate the data (though the more common tactic these days is to discard inconvenient data). There is nothing wrong with that so long as they can make themselves sound reasonable and that is where the "Credible" tick box comes in.

If a particular theory begins to make too many assumptions or even one assumption which is just too big a leap then the "Credible " box should not be ticked. Using the giant eel hypotheses as an example, should we tick that box?

Personally and until something comes in to change that (that is, new data comes in or my lack of understanding of biology) I would tick the credibility box on giant eels though I would not commit myself quite yet to the theory. I was not so disposed to this theory until I saw the eel like head with open mouth in the Hugh Gray photograph which suggested a piscean explanation for the Loch Ness Monster.

I flipped the Mackal eel head to match the Hugh Gray head for comparison. Note also that for a creature that inhabits darkness, smaller eyes would be expected which is what this picture suggests in contradistinction to the Mackal eel eyes. 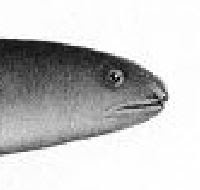 In summary, Nessie may be a giant eel but modifications are required to the morphology which could be attained given the large variety of morphologies we see in other orders of fish. But whether this is credible is largely down to the opinion of the reader. Comments are welcome!