Remember this picture from last year taken by William Jobes?

At the time I concluded my post by saying:

"Again, we need to see the other pictures and ask some more questions."

Because since I could not contact the witness, I could not take it further. Some suggested it was rubbish floating in from the Fort Augustus end of the loch which is fair enough but Rip Hepple in his latest Nessletter (more of that below) thought the object looked familiar to a photo he had once seen of a log. I dug around and found this picture in a 1977 book on Nessie. 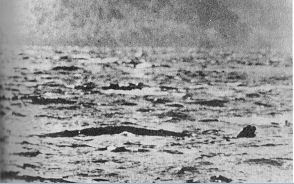 Does this prove Mr. Jobes saw nothing more than a log? The witness himself said in the Daily Mail report:

So it is the photo versus the photo-taker here (once again). The other thing cited against William Jobes was the allegation that he saw the same object in the same area again the next day. If so, the argument swings towards the log and away from Nessie.

However, to me the object looks a bit too "hump-like" to be a typical branch or trunk, though that does not prelude other pieces of human or natural debris.

Anyway, I always believe in the right of reply here. After all, key facts in a case have been known to be misreported or unreported in media articles before. So, if William Jobes stumbles upon this article and has something to say, send me a comment.
P.S.
Rip Hepple runs the Nessletter newsletter which has been running for nearly forty years now. I subscribe to it and so do other Loch Ness researchers. Rip brings decades of experience to the subject since his LNI days and was watching the loch when I was in my daipers. The Internet may bring information closer to you, but not necessarily experience and that is why I subscribe to Rip's newsletter. You should too if you have an interest in the Loch Ness Monster.