Filmed recently at Inverness. But if it had been at Loch Ness? Sorry, but those ears (or is it horns?) ain't fooling anyone. Shown at BBC website here. 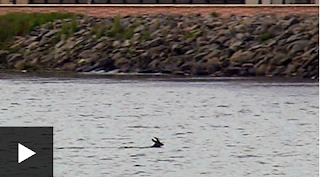 A Tale of the Sjo-Troll

I had an unexpected surprise when I was recently perusing one of my copies of "More Than a Legend" by Constance Whyte. Once you get to the index, that is normally that, but one of the previous owners had written a curious account in the final blank pages. The front pages of the book had the name of a Mr. Mather of Wigan written on it. It may be that he was the author of the notes.

The story was lifted from the book "Hampton on Pike Fishing" published in 1947. However, when I consulted the book at the National Library of Scotland, it turned out that this story had been further lifted from the first volume of an earlier work entitled "Scandanavian Adventures" by Llewelyn Lloyd, published in 1854. The book is no longer in copyright and can be accessed here. The quote below is taken from that earlier book:


"My brother, Captain Axel Westfeldt, Lieutenant J. Lekander, and the fisherman Modin," writes a friend, on whose word I place every reliance, "were one day fishing with Lang-ref, that is a line of great length, with several hundred hooks attached - of which more presently - in a large lake in Fryksdal, in Wermeland. When they had proceeded a considerable distance from the land, Modin suddenly pulled the boat right round, and in evident alarm commenced rowing with all his might towards the shore. One of the party asked the man what he meant by this strange conduct? 'The Sjo-troll, or water-sprite, is here again,' replied he, at the same time pointing with his finger far to seaward.

Every one in the boat then saw in the distance something greatly resembling the horns of an elk, or a rein-deer, progressing rapidly on the surface of the water. 'Row towards it,' exclaimed Lekander; 'the deuce take me if I don't give the Sjo-troll a shot; I am not afraid of it.' It was with great difficulty, however, that Modin could be prevailed upon once more to alter the course of the boat, and to make for the apparition. But at length the man's fears were partially allayed, and the chase commenced in good earnest. When they had neared the object sufficiently, Lekander, who was standing, gun in hand, in the bow of the boat, fired, and fortunately with deadly effect. On taking possession of the prize, it was found to be a huge pike, to whose back the skeleton of an eagle was attached. This fish, or rather the bones of the bird, had been seen by numbers for several years together, and universally went under the above designation of Sjo-troll.


The later Hampton book suggests that algae would have covered the skeleton, adding to the dramatic effect. They base this on other stories of birds meeting untimely ends when taking on pike. So, not quite a monster and not quite your standard misidentification explanation either. I don't anticipate this one being trotted out to debunk Nessie sightings.

As an aside, Lloyd goes on to discuss the Silurus Glanis, the catfish that was recently the focus of Nessie debates. Regarding its introduction to British waters, he says:

Through the indefatigable exertions of Mr. George D. Berney, of Morton, Norfolk, the silurus was last year introduced into England, and consequently is now included in our Fauna.

So the Wels Catfish was introduced into English waters in 1853. Sadly, no reference to Loch Ness or Scotland is made in this regard.