Anyone with an interest in the Loch Ness Monster will tell you that the earliest account of the monster was by Saint Columba sometime in the 6th century AD. The story itself has been repeated countless times in books, magazine and newspaper articles since the early days of Nessie fever in 1933. Even the latest Nessie story can't help but stretch back nearly 14 centuries to make a mention of it.

But today I want to bring that bit of Nessie history a bit closer to its ancient times and instill in you the almost timeless mystery that is the Loch Ness Monster. It is in fact the earliest copy of Adamnan's account of the life of Saint Columba. This manuscript is believed to have been written during Adamnan's lifetime or shortly after which places it late 7th or early 8th century. The library itself says the document:

"is the oldest surviving copy of Adomnán of Iona's Life of Columba, and undoubtedly its single most important witness.  It was copied at Iona during (or shortly after) Adomnán's lifetime, and is also a splendid example of early medieval insular bookmaking, having been colorfully described by E. A. Lowe as embodying the 'pure milk of Irish calligraphy'"

In times past, only the privileged and academic few would have been able to gaze upon this most rare of Loch Ness Monster documents but thanks to scanning technology and the Internet, it is now available to view to all. The document is hosted by the Virtual Carolignian Libraries of St. Gall and Reichenau (the former monasteries which held such documents). The actual physical manuscript is held by the Stadtbibliothek in Schaffhausen, Switzerland.


Now going to the above link presents a Latin document in a beautiful but difficult calligraphy which makes the task of finding the story a challenge. However, after some digging about, I have found the two relevant pages that relate the tale of St. Columba and the monster and they are reproduced below. 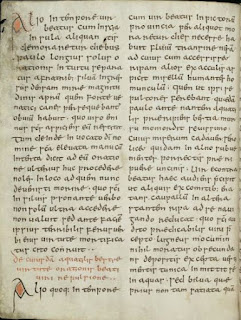 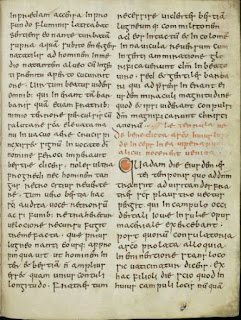 They are located on pages 74 and 75 and the story begins with the red text at the bottom right of the first page with a reference to the "aquatilis bestiae" or water beast. If you then go over to the right hand column and look down to the fourth line you will see the words "fluvii" and "nesa" which refer to the River Ness. The account ends on the right hand column of the next page prior to the next red words. I won't reproduce the entire Latin text but the english translation is below.

OF THE DRIVING AWAY OF A CERTAIN WATER MONSTER BY THE VIRTUE OF THE PRAYER OF THE BLESSED MAN.

At another time again, when the blessed man was staying for some days in the province of the Picts, he found it necessary to cross the river Ness ; and, when he came to the bank thereof, he sees some of the inhabitants burying a poor unfortunate little fellow, whom, as those who were burying him themselves reported, some water monster had a little before snatched at as he was swimming, and bitten with a most savage bite, and whose hapless corpse some men who came in a boat to give assistance, though too late, caught hold of by putting out hooks. The blessed man however, on hearing this, directs that some one of his companions shall swim out and bring to him the coble that is on the other bank, sailing it across.

On hearing this direction of the holy and famous man, Lugne Mocumin, obeying without delay, throws all his clothes except his under-garment, and casts himself into the water.

Now the monster, which before was not so much satiated as made eager for prey, was lying hid in the bottom of the river ; but perceiving that the water above was disturbed by him who was crossing, suddenly emerged, and, swimming to the man as he was crossing in the middle of the stream, rushed up with a great roar and open mouth.

Then the blessed man looked on, while all who were there, as well the heathen as even the brethren, were stricken with very great terror; and, with his holy hand raised on high, he formed the saving sign of the cross in the empty air, invoked the Name of God, and commanded the fierce monster, saying, Think not to go further, nor touch thou the man. Quick! Go back! '

Then the beast, on hearing this voice of the Saint, was terrified and 'fled backward more rapidly than he came, as if dragged by cords, although before it had come so near to Lugne as he swam, that there was not more than the length of one punt-pole between the man and the beast. Then the brethren, seeing that the beast had gone away, and that their comrade Lugne was returned to them safe and sound in the boat, glorified God in the blessed man, greatly marvelling. Moreover also the barbarous heathens who were there present, constrained by the greatness of that miracle, which they themselves had seen, magnified the God of the Christians.

Needless to say critics attempt to dilute the account on the grounds that it occured in the River Ness and not Loch Ness and that saints were encountering fabulous beasts left, right and centre. I address these objections in my book and mention two other stories of Columba and the Monster which are not so well known and place the beast firmly in Loch Ness itself.

I would also note that a few modern sightings of the creature have occured in the River Ness. But I don't think anyone is suggesting these should be discounted because they did not happen in Loch Ness!

In summary, it is a bit awe inspiring to see such an ancient document from the Dark Ages make mention of our favourite cryptid. One wonders how the monks who painstakingly created this manuscript would react if told the very creature they wrote of would still excite the imagination 1,300 years later?