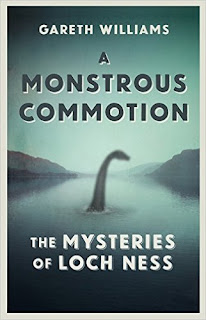 This year brings us a new and informative history of the Loch Ness Monster and her detractors and adherents. The last one was Nicholas Witchell's revised 1989 edition of "The Loch Ness Story", and November 2015 brings us Gareth William's "A Monstrous Commotion".

However, it would be fairer to reverse terms and say this is a history of the adherents and detractors of the Loch Ness Monster as it seeks to present the human side of an endearing and enduring mystery.

Now, my own interest in the Loch Ness Monster dates back to when Witchell's first edition came out in 1974. Forty years on, I may have thought I had a pretty good grasp of the Monster and its pursuers, but it seems to be a truism (certainly for me), that we forget more than we remember about even favoured subjects.

So, it was certainly a refresher lesson for me to again read of the exploits, successes and failures of the monster hunters that stretched back to 1933 (and before). One can argue that the failures outweigh the successes and that is certainly writ large as the trials and tribulations of various small and large expeditions are charted from the semi-serious joints of meat hurled by hook into murky waters to the hi-tech, multi-disciplinary technologies of later hunts.

None of them delivered the conclusive proof that hard nosed scientists demanded and with that all of them fell into the annals of cryptid history. Gareth Williams revisits those heady days of Edward Mountain, the Loch Ness Investigation Bureau, the Academy of Applied Sciences and Operation Deepscan. Each brought something new to the table in the great chase, but what about the people and personalities?

Gareth Williams' book breaks new ground by tapping into the archive of a central figure in that most intense period of Nessie fervour, the 1960s and 70s. That figure was Sir Peter Scott; naturalist, Olympic medallist and Nessie believer. In fact, one gets the impression this was the catalyst and motivation for writing the entire book in the first place.

Peter Scott was a major influence in how the monster hunting scene of the 1960s developed as he tried to bring together the scientific community and the monster hunter community. Throughout this period and into the 1980s, he regularly communicated with various names familiar to us such as Tim Dinsdale, Constance Whyte, Robert Rines and so on. Those letters have been preserved and in them we see not only the opinions of people as regards the existence or non-existence of exotic creatures, but also their opinions regarding other people and the various Loch Ness projects.

This is where "A Monstrous Commotion" begins where the more anodyne "The Loch Ness Story" ends in exploring the dynamics of human relationships in the great monster quest. Of course, such opinions were deemed confidential at the time, but since the vast majority of all these players are now dead, the negative and positive comments inked onto paper can now be revealed.

One would have suspected that what we know of human nature would reflect in the all too human world of monster hunting. That has been confirmed by Gareth as people like Tim Dinsdale and Robert Rines do not come out of this smelling of roses. One however wonders if there is yet more to tell concerning people who are still alive and have been spared embarrassment?

Certainly, it has been told me that Rines, in a burst of American forthrightness, told a current Loch Ness researcher to "Piss off, Sonny!". One suspects Rines was not the most angelic of figures (though what elicited that outburst is not known to me).

The other aspect of taking up the hunting of this Scottish Snark was the detrimental effect it seemed to have on other aspects of one's career and relationships. The obsession with the monster has closed many a door which otherwise was wide open to those with the undoubted talents to do so. It seems an undue focus on Nessiteras Rhombopteryx aided and abetted by an actual sighting of the creature led to blindness in other areas. Let that be a lesson to us all.

Gareth extends this thought into how monster hunters selectively picked or ignored various sightings to bolster their beloved plesiosaur theory. That may be true, but he omits to mention that those on the other side of the debate are also guilty of bias driven analysis. To wit, he mentions how Gould rejected the un-sea serpent-like sighting of a crocodile like creature in the River Ness in 1932.

However, sceptic Adrian Shine, in an attempt to bolster his roaming sturgeon theory, holds up the exact same account as a possible sturgeon sighting, rather than consign it to one of the more humdrum creatures that frequented the river and loch. My own feeling was that sceptics got off too lightly in parts of this book, as if they were uninfected by the human frailties of their opposite camp.

One case in point is the Peter MacNab photograph. Gareth gives us the flow of debate around this picture as even the Professor of Zoology at Oxford, Sir Alister Hardy, became an advocate of the photograph. When he comes to Roy Mackal's treatment of the photograph, the problem of why foliage in the foreground is present in one version of the picture but not another is again presented as a reason to reject this photo.

However, this argument is forty years out of date as recent research has adequately demonstrated that the reason for the difference is that one picture is more enlarged than the other and thus cuts out the foreground foliage as a result.

This is a problem noted before in recent publications on the monster. There is the printed matter published between 1934 and 1976. However, the debate has now moved onto the Internet and that is where authors need to go to get the latest thinking (be it of an anti-monster or pro-monster cast).

Having said that, new books do address old arguments and I am tempted to send Gareth a free copy of my "The Water Horses of Loch Ness" book as he also travelled down the well-trodden sceptical path of saying there is precious little monster tradition prior to the Nessie era of 1933. Since Gareth acknowledges Dick Raynor and Adrian Shine were heavily involved in the editing of the document and "correcting my many errors of fact, chronology and interpretation", it is not difficult to see their sceptical influence on how the Loch Ness mystery should be "interpreted". Facts and chronology can be objective, interpretation is more subjective.

But perhaps subjective interpretation even trumps objective chronology? In Gareth's book, it is stated that Peter MacNab took his picture on the 21st October 1958 (page 67). However, MacNab always said he took it in the Summer of 1955. If the aforementioned advisors did indeed correct him on chronology, it suggests that they "decided", on their assumption it was a fake photo, that it was actually "taken" only days before its publication. That is not objective chronology, that is subjective interpretation.

Typographically, the book has few errors and that is a credit to the proof readers. The only thing I would seriously query is plate 46 which shows the 1972 flipper photograph. The bottom picture does not look like the JPL enhanced picture, but another one called the "two body" picture. I think the actual image is this one below. 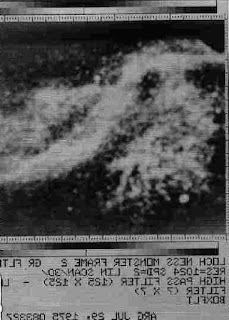 But how do you tell the tale of an unproven monster swimming along the borders of human fantasy and objective reality? Gareth does the right thing in telling it from the perspective of the actors in this play. So, we get history new but also history old as respect is given to the eyewitnesses. Thus, the look and feel of the saga is preserved as tales of long necks, humps, flippers and outsized flanks creating a terrific commotion in the midst of the waters reflects and catalyses the commotion playing out on terra firma.

Ultimately, the shadow of the sceptic intrudes as Gareth goes through the various theories which try to explain these incredible sights without the need for a plesiosaur, sea serpent, giant salamander, tullimonstrum gregarium or giant eels.

As I read through his veritable blizzard of so called ordinary things seen in extraordinary circumstances, it struck me how virtually anything that has existed near the loch has been employed as an explanation. From cars to boats, from dogs to ducks, from deformed cows to dead trees, this blunderbuss approach spins the mind and one soon realises it is easier to state what has not been employed in this revisionism rather than what has.

If almost anything can be employed as an explanation, one wonders how that devalues the whole approach?
CONCLUSIONS

I would have liked to have seen the history extended further. Witchell's "Loch Ness Story" took us up to 1989, but Gareth's book only really goes a few years further to include the 1993 "Project Urquhart" and the 1994 expose of the Surgeon's Photograph. Apart from a brief biopic on Steve Feltham, the period between 1995 to 2015 is still largely a black hole to readers.

However, Gareth's book is a good addition to the Loch Ness literature in how it lifts the lid on the human side of the Loch Ness Monster hunt. From Crowley's "Koloo Mavlick" to Torquil MacLeod's swan-off shotgun and Dinsdale's preoccupation with the Queen, there is plenty to inform and entertain. Whether that takes us closer to deciding whether there is an exotic creature in Loch Ness is another matter. Gareth wisely leaves that conclusion to the reader. I personally think it does not, but it does reveal to what extent this phenomenon drives both believer and sceptic.

Gareth's postscript ends on an ironic and perhaps unintended note. He begins with a Colonel Lane's sighting of a torpedo like object ploughing a watery furrow through the loch in the 1940s.  He ends it with current monster hunter Steve Feltham also witnessing a torpedo like object cutting speedily across the loch. Loch Ness history continues to beat the same rhythm and that perhaps sums up the ongoing hunt for the beast of the loch.

I thank Gareth for bringing these things to the attention of Nessie people everywhere and recommend it as a worthy addition to their crypto-bookshelf.

No Peace for Nessie 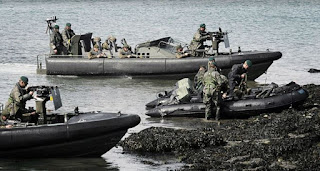 The heaving throngs of tourists have left the loch, but can Nessie now safely surface without those annoying humans getting in her face?

It seems not for her Majesty's Armed Forces have been using Loch Ness as a training ground prior to bigger manoeuvres in Norway next year. Hopefully the Loch Ness Monster will literally dodge a bullet here. Video of their visit is here or here. 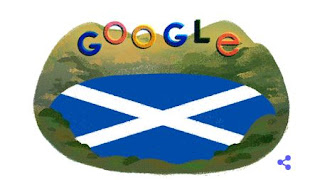