A Review of "The Loch Ness Mystery Reloaded" (Part I) 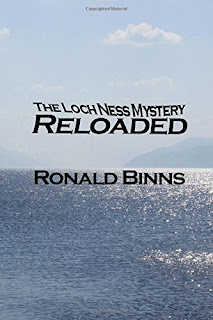 WHO IS THE KING OF THE NESSIE SCEPTICS?

I mentioned last year that arch-sceptic, Ronald Binns, had published another book entitled "The Loch Ness Mystery Reloaded". I have begun to read my copy but began to realise that the number of statements that could be challenged on logical, historical and other grounds was accumulating so fast that a single review could amount to a huge plodding article or a short one that misses a lot of points. So, for the sake of focus and debate, I will deliver my thoughts on this book in instalments. How many depends on how the quality of the book progresses.

Naturally, one was interested to know what had changed since Binns co-authored the 1983 book, "The Loch Ness Mystery Solved". Another sceptic, Joe Nickell, had reviewed it and, not surprisingly, declared the mystery "even more solved". Whether one should consider Joe Nickell an expert in matters pertaining to Loch Ness and its famed monster is a matter of opinion. I personally view experts as those whose main focus is on the subject under discussion.

The problems began right at the beginning with the first page of the preface. That section tells us that Binns' 1983 book "exploded out of nowhere to shatter the culture of the monster faithful". I wondered to myself what "yes" man Binns had asked to write this fawning preface. As it turned out, it was Binns himself who wrote the preface describing his own book. One normally employs someone else to heap the praise on for ones work, evidently Binns has no problem doing it himself.

The preface indulges in more self-congratulation by leaving the reader in little doubt that Binns regards his 1983 book to be the first sceptical work on the monster when everyone else knows it was Maurice Burton's 1961 book, "The Elusive Monster". However, in his desire to make his book "numero uno", Binns dismisses this on the grounds that Burton held out the speculation that an outsized species of otter may be indigenous to the area.

Considering Maurice Burton spent most of the book panning and debunking classic sightings, films and photographs in true sceptical fashion; one may consider this a preposterous statement. But because Burton leaves the door ajar for the possibility of a large otter inhabiting the area, Binns decides that "The Elusive Monster" cannot be a "sceptical book".

I thought that over and it struck me that this is a bit like saying well known sceptics such as Adrian Shine and Tony Harmsworth must have never written any sceptical works because they mention the possibility that a huge sturgeon may have been present in the loch at some time to generate sightings. Does this mean these two gentlemen are actually "believers" or "non-sceptics"? It seems so, according to Ronald Binns.

Apparently, you are only a real sceptic if you declare nothing unusual was ever in the loch, even if some normal or large versions of a known species were in transit confounding the locals and tourists. The point is of course one for the sceptics to really sort out. Does a speculative nod to a giant sturgeon or otter turn a book into a cryptozoological item even if 90+% of it is clearly of a sceptical nature? That answer is surely no and Burton's book remains the first sceptical tome on the subject of the Loch Ness Monster.

I must say in the light of this bluster by Binns, it is ironic that he takes it upon himself to accuse Burton of sometimes adopting a "dogmatic, haughty manner"! As Binns progresses into the first chapter to further extol the glories of "The Loch Ness Mystery Solved", I recalled how in various articles I covered the anomalies, misrepresentations, ad hominems, bad logic and hyperbolic narrative in that book.

So, it was with some amusement that Binns further rejoiced that the "book's analysis had stood the test of time". Does his new book suffer from the same problems? Does he even bother to address any of my analyses of his 1983 works? That will be revealed in time.

Just like his 1983 book, Binns here begins to put out statements which can shown to be false. For example, in his continued attempt to dethrone Maurice Burton, he tells us that Burton took Lachlan Stuart's 1951 photograph to be genuine when Burton himself said "the unusual behaviour and the absence of animal features makes it tolerably certain that we have to look elsewhere than among the prehistoric animals to account for it.". The problem is that Binns misinterprets Burton's statement which was meant to mean that this was a "genuine" photograph as opposed to a "fake" photograph.

However, the "absence of animal features" clearly shows Burton was looking for a more natural but non-zoological explanation. The Binns of old had not gone away with his mangling of texts. In that regard, the book is admitted as an appendix to the older book and this is very much in evidence in the first chapter where the eminently challengeable themes of "The Loch Ness Mystery Solved" are reprised while the book is praised to the hilt with such ego-laden phrases as "iconoclastic book" and "another of my great discoveries ...".

But back to the nub of the article as various Loch Ness personalities get criticised by Binns, but also current Nessie sceptics Adrian Shine, Dick Raynor and Tony Harmsworth whom Binns clearly insinuates were his implicit students on their final journey to scepticism - whether they like to admit it or not. Back in 1983, Binns alleges that these people were not real sceptics since they held onto something he regards as alien to the sceptical nature. Indeed, Binns avers that it was his book that helped them finally go over to the "dark side".

That Tony Harmsworth disagrees with this statement is clear from his own website where he calls Binns the "author of the rather prematurely titled "Loch Ness Mystery - SOLVED" book.". Clearly Tony did not regard Binns' book as iconoclastic! Adrian Shine and Dick Raynor are silent on what they think of Ronald Binns' regal claims. However, a hint is discovered in Binns' new book when he says that only North American sceptics warmly received his 1983 book - implying the reception from our other British sceptics was lukewarm at best.

So where does this leave us in the matter of who occupies the sceptical throne? That Ronald Binns has come out of hiding thirty four years later is a surprise by itself. Why did he do that? Was it to address matters he thought were not being addressed? Or perhaps in this sceptical age, he wants some recognition for what he did in the 1980s? Indeed, perhaps the over the top lauding of his previous book is tactical rather than egotistical? Only time will tell how this pans out. If Ronald Binns begins to overtake Adrian Shine in media soundbytes, somebody's crown may be slipping.

The next part of this review can be viewed here.