More Monster Hunting on the Isle of Lewis 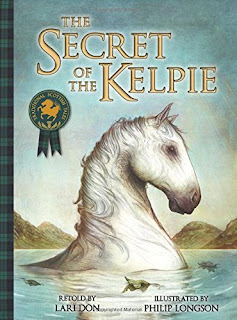 I had previously written of my monster hunting activities in the distant Isle of Lewis back in 2011, including my attempt to get to Loch Ulladale, the stories surrounding that creature as well as the various other lochs of legend. I was back on the island last July and was minded once more to go about some cryptozoological business of the aquatic variety.

As a primer, I purchased a rather delightful book entitled, "The Secret of the Kelpie" from the tourist shop in the town of Tarbert (which is actually on the adjoining Isle of Harris). What could I find in the way of modern kelpies in 2016? Back in 2011, I had made the long hike to Loch Ulladale and was within sight of the loch before being turned back by deep bogs and a plague of horse flies.

That was frustrating, but I had another loch in my sights and that was Loch Urabhal (pronounced "uraval"). This was motivated by a story from the Glasgow Herald of 29th July 1961 which is reproduced here from Paul Harrison's "Sea Serpents and Lake Monsters of the British Isles" (2002).


A monster appeared in Loch Urabhal, near the village of Achmore, in Lewis, on Thursday evening (27 July 1961), Mr Ian McArthur, a Forres school teacher who is holidaying in Lewis, said yesterday. Mr McArthur had gone out fishing with Mr Roderick Maclver, a teacher from Stornaway, and his brother Donald, on leave from teaching in Aden. `Roddy and I were fishing at the shallow end of the Loch, when Roddy jumped to his feet shouting "There's something in the Loch".

I then saw it myself. Donald, who was fishing farther up the Loch, did not see it, but he saw we were excited about something. It was about 45 yards away from us in shallow water and it appeared three times. It had a hump and there was either a small head or fin about 6 feet away from the hump. It swam like a dolphin but was much bigger. `Urabhal is an inland Loch, and no dolphins could get into it. I have been fishing there and so have the Maclver brothers since we were boys and have never seen anything in the Loch.

I asked my father if there were any legends about the Loch, but he said there was none. He thought it must have been an otter, but this did not swim like an otter. We saw it distinctly because the sun was shining and the water was calm. I had my camera out ready for a picture when it submerged for the last time.' According to a local historian, Dr Donald MacDonald, of Gisla, there are no traditions attached to Urabhal.


With all this in mind, it was off to Loch Urabhal on the 28th July 2016. The maps below give you some idea where this little loch is in relation to Loch Ness. 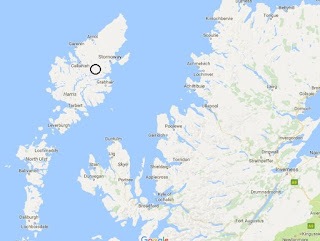 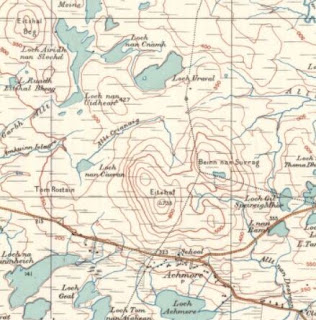 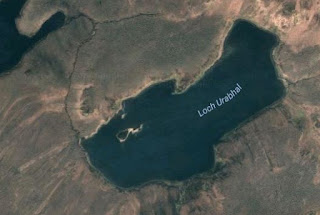 Parking at the village of Achmore, we donned the hillwalking boots and waterproofs and headed north. The hill adjoining the village was ascended as we navigated round the hi-tech communication masts erected there. After that, nature resumed and the going underfoot was firm to soft depending on the nearby streams and contours. As you can see, Lewis is a place rather bereft of trees. 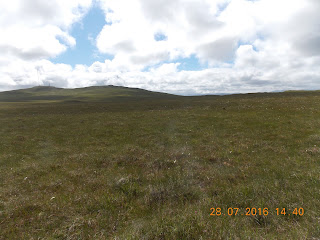 It took over an hour to trudge there, but the loch eventually came into view once a ridge was cleared. As expected, it was a rather small affair. The loch measures about 900m by 400m at its widest points and I suspect the depth was not great, but obviously enough to fish from, going by the Herald account. 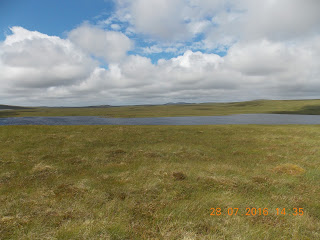 I panned across the loch as you can see on this video.

The loch was scanned for a while and nothing of a cryptid nature showed itself, apart from this object which was noticed on the other side of the loch during our surveillance. Was it a shark or some other finned life form? Unfortunately not, as it was immobile throughout and so was presumed it to be nothing more than a rock (there were other small outcroppings dotted around). 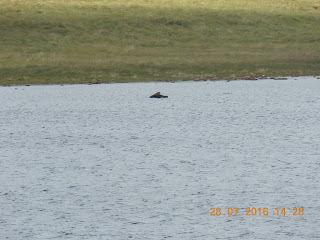 Now it was pretty clear that nothing of the size described could live here for long in terms of an indigenous, breeding population. So, if this was an accurate account, it seemed the best theory was that something came in from the sea. The fact that the report stated the men were fishing implied that, like the surrounding lochs, there was a supply of trout or salmon to be had and these most likely migrated from the sea (as opposed to being resident trout).

The loch is about five miles from the western coastline as the crow flies. An examination of the map does show a complex pattern of small lochs and their interconnecting streams and that revealed a route to the sea from the loch that takes in four other lochs along the way. So, a large creature could with some effort get from sea to loch.

I agree with the original account that a dolphin is an unlikely candidate which leaves a seal or some other semi-aquatic creature. My only quibble with the seal theory is that a seal is unlikely to disappear in such a loch and should have surfaced frequently enough to be identified.

So, whatever appeared in that loch fifty six years ago was likely a "flash cryptid"; here today, gone tomorrow and a guest rather than a resident. Having said that though, it is entirely possible that the skeleton of a large creature which failed to get back to the sea still resides at the bottom of this shallow loch ......