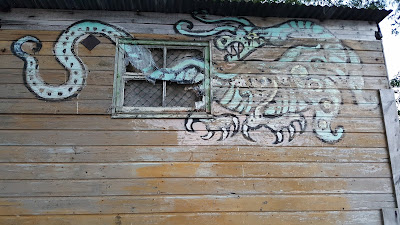 It was off to Loch Ness the weekend before last to work, rest and play. The weather was good, the food was good and, if you know enough of the area, there is always something to do. I pitched the tent at my usual spot at the Foyers campsite with a view of the loch to enjoy and good facilities all round.

September must be one of those monster hunter months. Gordon Holmes had just vacated his spot at the same campsite and I took up the baton. Meanwhile, William Jobes was also finishing up in the Fort Augustus area of the loch where he took his 2011 pictures (and which we shall speak on in a future article).

I remember when I regularly read Rip Hepple's newsletter back in the 1980s, that he would report on who was going up to the loch for a week or two of monster hunting and tell us how others had fared on their return. It's nice to know there are people still continuing in that tradition in the teeth of those Nessie sceptics who class them as delusional.

Mind you, September is probably a good month to be there. The schools have gone back and the weather is still good. Having said that, the campsite was still at three quarters capacity and replaced by pre-school families and older couples.

I always go for a walk along the beach below the campsite near where the Hugh Gray photo was taken and from where I took the first photo above. It's a prop from the 1996 film, "Loch Ness" and belonged to the slightly nutty monster hunter character, Gordon Shoals. Who owns it or what is inside is unknown to me and I really ought to ask the campsite owner next time I am up. 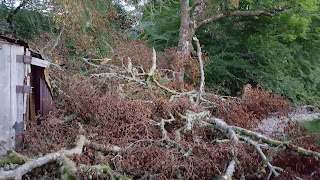 The next photo tells of a curious sight further down the beach in the form of a felled tree. I say curious because all the trees around it were intact. The site staff thought it was an old tree which succumbed to heavy winds. Perhaps, though this stretch of beach is fairly well sheltered from the prevailing winds by a small peninsula. Monster, wind or unruly kids; it's all part of the fun of Loch Ness speculation.

I did various experiments which I shall not go into great detail, I have already spoken of the night run along the Inverfarigaig-Dores road in a previous page, but I also did some work with night vision binoculars. The "in situ" setup is shown below. 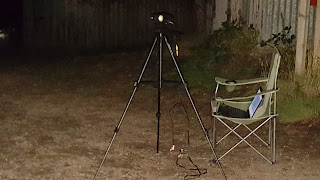 The infra red binoculars are on the tripod and a composite video cable feeds into the laptop on the chair via a usb converter. The process is complete with the Debut video software capturing the input and saving it to a file. As said before, it is pitch dark to the human eye, but the setup gives a pretty good view of the loch. Nothing of interest was seen and, as usual, it was the laptop battery that packed in before the binoculars.

What I hope to do in this area is to step up to a device such as the Flir TS32 Pro pictured below. They give a crisper image, are more portable and give a longer battery life. If anyone wishes to donate one to the cause, I will be more than happy to accept! 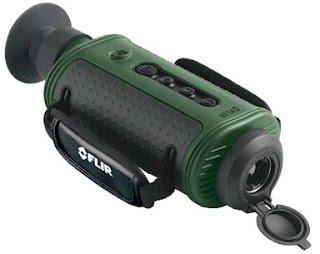 On Sunday, it was off to the "Monster Masterclass" run by Jacobite Cruises. The invited speakers were Steve Feltham (full time monster hunter for 25 years), Gary Campbell (who runs the Official Loch Ness Monster Sightings Register) and Willie Cameron (who markets Loch Ness and the Monster). Here they are shaping up to talk onboard. 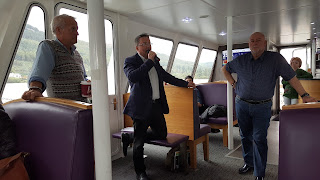 It was a good series of talks as the history of the loch and its most famous resident were addressed from slightly different perspectives. A table of exhibits consisting of books, pamphlets and other material was on display and the whole thing was rounded off with a Q&A session. One thing that did not occur, which I thought may happen, was some tips on how to lookout for the monster and what actions to take if the old girl puts in an appearance.

What we were then treated to was the now controversial claim to a new record depth. I covered this in a previous article with a claim of 889 feet as opposed to the official 754 feet. As we approached the trench, the depth counter on the screen began to count up. I managed to get a snap at 884 feet and 838 feet on the wider sonar scanner. 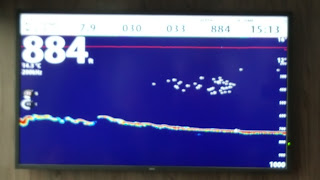 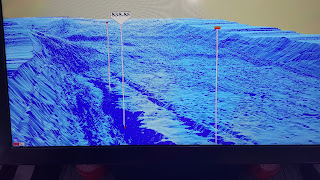 Admittedly, the issue here is that others have not reproduced this result. I can accept that but it is strange that they can repeat this result on, not one, but two different instruments. Gary Campbell was of the opinion that perhaps a recent tremor had caused the silt to collapse in the trench and form a new depth. Only time will tell how this one eventually pans out.

Now an employee from a competitor cruise company was asking about this (and perhaps more details). He is none other than arch-Nessie-sceptic, Dick Raynor. That cruise company is literally a boatload of sceptics and won't hesitate to pounce on customers to purge them of any silly monster nonsense. The trouble is their logo below would make you think they were the complete opposite. Ah well, a picture of a floating log or a boat wake just doesn't look the same, does it?

Actually, I had an idea as the boat headed down the Ness towards the loch. The river at Bona Narrows is - you guessed it - quite narrow. A good place for a trap camera perhaps? After all, a lot of the width would be under the regime of the camera's motion detect and IR. Anything passing by of a cryptid nature would be more likely to be snapped as opposed to a camera looking out on a mile of loch. Perhaps one for the future!

On the final day before we headed south, we boarded another boat run by Cruise Loch Ness. Unlike the cruise just mentioned, these guys won't try and denessiefy you, but rather they keep an open mind on the subject. I talked to one of the crew, John, as we headed out to the Horseshoe Scree. It had been reported that he had seen a "100 pound salmon" which was not quite true.

The actual story was that he was looking over the side a few weeks back as they were heading out and he noticed an animal alongside just barely at the surface. He described it as having a kind of white mottled appearance and (pointing to a seat cushion), he estimated what he saw measured about three foot by a foot or more. It was only visible for seconds. 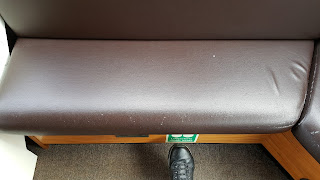 I photographed the size comparison seat with my size elevens for scale. What did he see? Seal, dolphin, large fish or Nessie? He wouldn't commit to an answer, though he thought a diseased salmon was a contender. My thought was how much of a dark back would be visible before the rest is lost to view leaving only three foot by one?

The sonar setup was also superior the other aforementioned cruise with two displays giving two different perspectives on the loch. These are the same as the ones shown above for the Jacobite cruise. To round off, one of the Cruise Loch Ness crew says they get large, anomalous sonar reading perhaps once every two years. That is a subject worthy of further enquiry.

And so, it was back to the city. I hope you have found my little travelogue informative and entertaining. I confess I have not done it in the format of the "from the shoreline" series back in May, that just ate too much into the Loch Ness evenings!