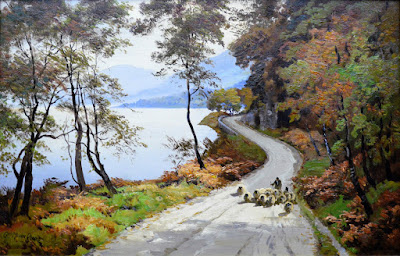 On the back of my last post about photographing Loch Ness by night, I noted the painting above. It was painted by George Melvin Rennie, a prolific Scottish landscape artist who lived from 1874 to 1953. The work above is entitled "Morning, Loch Ness", though the date of execution is uncertain. One biopic I found says this of him:


George Melvin Rennie (1874-1953) was a Scottish artist whose name at birth was MacDuff. He studied art part time at Gray's School of Art in Aberdeen and became a full-time artist during the WWI. He opened a studio in Braemar in 1924. His favourite subjects were in the Grampians, but he also painted landscapes of Argyll, Ayrshire, Arran and the west coast of Scotland. He was a prolific artist. He is listed in the Dictionary of Scottish Painters.


Now having taken my night time picture of Loch Ness at "The Wall", I wondered if the painting above showed the self same wall? The time difference is perhaps as much as 100 years, the road has undergone redevelopment and allowances also have to be made for "artistic license". Here is a Google StreetView of the same stretch of road.

Well, it may not be that area, but if Rennie was paying attention to his shadow work, then the title of "Morning, Loch Ness" indicates it shows a scene from the south side of the loch where the Wall is. Anyway, the point relates to land sightings of the Loch Ness Monster.

Observe the pastoral scene of a shepherd leading his flock of sheep along the road in a southerly direction towards Inverfarigaig. This was the backdrop for such monster activity. Cars were a rare phenomenon and the road was a much, much less dangerous place for animals (only last week I drove past the fresh corpse of a deer on the same road).

If the area was safe enough for sheep to be herded, it was safe enough for a monster to make its rare excursions onto land - and indeed form the kernel of truth behind the land based Water Horse legends. But those days are gone now. Much of the roadside is fenced off, lined with crash barriers or overgrown with large trees.

The Wall may be one of those stretches where an amphibious creature could get onto land. However, the area on the other side of the road is quite a steep incline into forest interspersed with hard rockface. It is not clear to me what incentive would motivate a large creature to lumber onto this particular stretch.

I also have a postcard from the 1930s which depicts a similar car-less scene, though this is not the same place (it may be near Abriachan). The message is pretty much the same though. 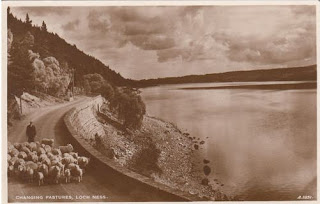 By the way, if you wish to purchase this painting, it is on eBay just now at this link.