It was a while back that a reader posted a comment on this forum suggesting I look up a sea serpent story he had once read in a book. I eventually did and bought the book he recommended by Michael Prichard entitled "Sporting Angler" published in 1987. The story begins off the Isle of Arran on the west coast of Scotland just off the Bay of Brodick, to which I add an approximate circle on the map below. The story I reproduce verbatim below and the creature sketch above is taken from the same chapter. 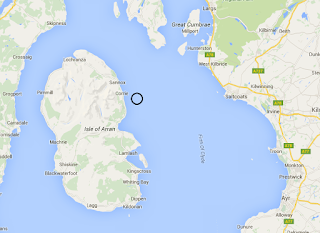 Sometimes, however, we come across a situation and a rarity that defies adequate explanation; and often the occurrence so varies from the norm that we dismiss it or keep quiet for fear that our sanity will be questioned.  I had an experience, years back, that I have only talked of recently, encouraged by reading of similar experiences by highly regarded writers. I leave it to you, the reader, to make your own decision as to its validity.

I was fishing for haddock, with Mike Shepley, off the Isle of Arran. Our dinghy was drifting on an oily-smooth sea, over 9 fathoms of water, off the Corrie shore, just outside the Bay of Brodick. The evening was beautiful, little cloud cover and a half-light that allowed us to see for miles. Mike and I had caught a few small haddies while we chatted away and enjoyed a simple fishing that was lazy yet productive.  We were suddenly alerted to a noisy splashing ahead of the boat's bow. A glance showed that there was considerable disturbance to the surface about 50 yards farther out in deeper water.

Our immediate thought was of a shoal of mackerel, a breaching basking shark or a bunch of seals, all of them distinct possibilities in the Firth of Clyde, and all subsequently discounted, in the light of our experience, as unlikely. The ruffled water settled back to smoothness and we were both able to see, clearly, what appeared to be a head and a long body break the water's skin. The head was rounded, and then came a gap of a couple of feet, suggesting a neck, before the larger, thicker bulk of the body.

The creature seemed to me to move in a series of undulating motions: not the side to side (horizontal plane) swimming movements of a fish but more the up and down (vertical plane) progress of a mammal, such as a porpoise. I recall that the head was only slightly raised above the apparent level of the body mass. I cannot say that I saw any evidence of fins, either dorsally or otherwise. Overall size is difficult to judge when something is moving away from you, yet I would suggest that it was longer than our boat, making it over 17 feet long.

The observation wasn't a fleeting glimpse; we watched for several minutes. All this time the thing was on the surface and swimming in a straight line toward the Scottish mainland. I have since had many thoughts about this sighting, none of them given any added dimension until reading Gavin Maxwell's account of similar happenings in his book about the shark fishing industry, Harpoon at a Venture, wherein he recounts the experiences of a  number of Hebridean folk and quotes other sightings of creatures not, as yet, explained by science.

Neither Mike Shepley nor I have diluted our opinions as to what we saw. After many years the sighting remains as clear as on that alcohol-free evening in Arran. I have since seen a great many other marine mammals, such as whales and porpoises, but never has there been any similarity in their behaviour to that of the 'Corrie creature'!
So ends Michael's story. He also speaks generally of sea serpent sightings, referring to McEwan's "Sea Serpents, Sailors and Sceptics", which I own but have not read in depth. I include that excerpt at the end of this article. Given the amount of claimed sightings on the west coast of Scotland, it is a study in and of itself and one wonders what the connection is between loch monsters and sea monsters in Scotland. That will form the basis for a future article!

As it happened, I managed to make contact with the other witness that day, Mike Shepley, and asked a few questions about how he saw things. He agrees that they saw something strange and classed it as a "memorable and unique experience". His words to me were:

We differed in the description of what we saw on and sub-surface. We were off Brodick to the north of the bay in a 16 foot clinker built boat/outboard - flat calm at dusk. The fish or mammal was longer than the boat and appeared to have a head of sorts. Undoubtedly one presence - not a colony of sea otters, seals in tandem etc.

I think Mike alluded to a 'humped' entity. My recollection was more of an eel-shaped movement which could have however concealed a substantial sub-surface body. It was not an eel. Nearest I could place it if not some kind of mammal (serpent) was a possible Oar Fish. One used to be displayed in Edinburgh's Chamber Street museum, caught in the Firth of Forth - like a giant blenny some 25-30 feet long.

We did do some research and found reference to sightings of marine serpents in Victorian times and earlier including a reference to Brodick Bay! I took photos and remember Mike (also as a professional photographer) stating I was wasting my time in the low light and virtually mirrored surface. I ran the best part of a film (36 shots) and failed to get a sharp image of anything resembling what we saw.

It disappeared as quietly as it arrived and was moving without apparent concern for our presence other than it may have surfaced to see what we were...

So, a difference in opinion as to what exactly was seen, and if Mike sends me a drawing of what he saw, I will update the article with it. Note also the problem of photography. Do not assume that just because you have a good sight of something, that means it will come out on film.

I would recommend Sea Serpents, Sailors and Sceptics by Graham J. McEwan: Routledge & Kegan Paul as further reading on this fascinating subject. Mr McEwan offers us 41 sightings in British  waters in the last century, along with a fascinating sequence of sightings and descriptions of  world-wide events! Oddly enough, quite a number are in the vicinity of Scotland's islands.

The  following extract from this book gives intriguing information about the long-necked seal, of which he mentions 94 probable sightings. Distinguishing features Long neck Small seal-like head Bulky body, lacking distinct tail Four large flippers Vertical undulations This creature seems to be covered in thick rolls of fat, the appearance varying somewhat to the displacement of this fat, showing one, two or three big humps.

There seems to be no distinct tail, but the hind flippers may resemble a bilobate tail, or, when held together as sometimes seals do, a fish tail. The skin looks smooth when wet and seen from a distance, but closer observation reveals it to be wrinkled and rough, sometimes showing what looks like coarse fur. It is dark on top, sometimes mottled, and lighter underneath. It seems to be between 30 and 70 feet long.

The animal can swim very quickly, attaining speeds of 35 knots, suggesting that it is a predator  which chases fish. It is found all over the world except polar seas, and the correlation between  sightings and climate indicates that it likes warm but not hot regions. This creature seems very likely to be a pinniped. The webbed feet or flippers, the absence of a tail, and in a few sightings its  movement on land-bounding like a sea-lion - point to this conclusion. In addition there is a