The Loch Ness Monster Bibliography continues to grow with books old and new. As far as the new is concerned, I would anticipate at least three books coming out in the next twelve months, but for now we look back to ones previously published but in digital format.

Up until recent years, all books I have added to the bibliography were in paper form. However, some of them have since become available in downloadable formats. Indeed, some have been updated and revised, but only in e-book format. As it stands, the majority remain as hardback/paperback and out of print. In fact, it would be a good idea to digitise these old books and give them a new lease of life since they are much more searchable in this format.

But some do not appear in paper at all (or in very limited print runs) and so one has no choice but to download them. Of course, there is nothing to stop you printing them out and binding them yourselves, but the trend is towards paper and pixels with some self-published titles never appearing in paper. Let us look at some of these now.

The first is titled "Four-Teans Go To Ness" by Colin Stott which, as the Blytonesque title suggests,  documents an adventure trip to Loch Ness by four intrepid monster hunters. I have to apologise to Colin for sitting on this for two years. I did read it and found it very entertaining, but it will now take its place in the Nessie bibliography. Readers of a nervous disposition are warned that some of the language used is stronger than some evidence for the Loch Ness Monster. 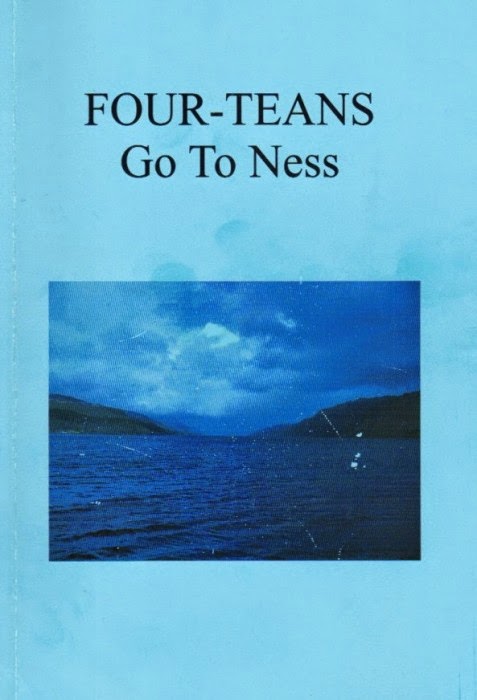 In fact, cryptozoologist Nick Redfern, had already reviewed this book back in 2009, so I will defer to him and link to that article for your edification. Colin sent me a paper copy, but these are no longer available. However, fear not, as you can now purchase the e-book version at Amazon.

The second e-book is entitled "A Tale From Loch Ness" by Graeme Caisteal. He describes his book thusly:

A fifty page satirical view of all thats wrong with Nessie Hunting in Scotland. Written by Graeme Caisteal a Scot with thirty years experience in reading "between the lines". 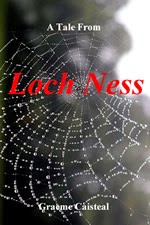 Graeme was a friend of famous monster hunter, Frank Searle, and mounts a defense against some of the allegations thrown in Frank's direction. I first noticed his Internet presence when Fortean researcher, Mike Dash, uploaded Frank's unpublished book. In fact, you could regard Frank's "Loch Ness Investigation: What Really Happened" as an e-book in its own right. You can find it here, courtesy of Mike Dash.

Graeme replied to Mike's article and defended Frank against charges of attempted petrol bombing. The two parties agreed to disagree but I followed up to chat with Graeme and get a copy of his e-book. Graeme also adds this excerpt from his now defunct website:

The sun rose slowly as I lay there in my small canvas tent, soft filtering light caressing my face as the morning erupted around me in a blaze of colour. I sat there gathering my thoughts, engulfed in this beauty. I could hear the rush of the water lapping against the rugged shore, the birds were singing and the forest seemed to heave a huge sigh of relief as another day broke. It was a beautiful June morning and I was only a stone throw away from Scotland's biggest mystery.

As I emerged into the light of day, eyes half closed, I could just pick out the ruin of Urqhuart Castle on the far shore, standing like a monument to some ancient memories of bygone days. The heat of the day started to thaw out my bones and once again I was ready to scan the dark foreboding waters of Loch Ness. Almost one thousand feet deep would it ever give up its secret. This is the home of my water dragon. To the world, it is known as the LOCH NESS MONSTER. For some sixty years Loch Ness has been subjected to multitudes of prying eyes and the fixed gaze of the telephoto lens, videos constantly at the ready.

Armed like snipers they sit watching with baited breath, waiting for the battle to commence. All they need is it between their sights, for the camera to snap into focus on that repugnant head. They can see the beast turn as it whips the calm waters into a cascading torrent large enough to capsize any local boat and in seconds it has gone. The video camera lies abandoned at their feet. They stand stunned and in silence, did it really happen?

If only I had pressed the button. Have I missed my chance forever? I hope in writing this book others can visit Loch Ness and investigate for themselves. Build up your own knowledge, do your own research and most of all read between the lines, open your eyes. When I first headed to Loch Ness armed with only what I read. I thought I knew it all. Like most people I trusted expert opinion until one day I realised, how can you have an expert in a subject that at present no one seems able to identify?

In fact the experts cannot even agree to whether it is an animal or a fish. They even argue amongst themselves to whether it exists at all. A new approach had to be taken. The Loch Ness bug had bitten deep and it was not going to let go. Out went all the old books and ideas and in came the Graeme Caisteal dossier of Loch Ness. A huge weight had been lifted from my shoulders just to be free from the tangle of other peoples opinion. It opened up far more than I expected.........

Originally, you could have obtained this e-book from his website, but that is now gone and Graeme has so far not responded to my email. I would happily put the copy I have on Google Drive, but need Graeme's permission. I will update this article when I know what is happening.

A third e-book that has been available for some time on the Internet is "Nessie Sighting" by Norman Lee from Clacton on Sea in Essex. This is a short e-booklet which documents one man's sighting of the Loch Ness Monster back in 1970. Before his death, Mr. Lee gave his evidence into the care of Lois Wickstrom who ran the "Nessie's Grotto" website. If you send an email to lois@lochness-monster.com, she will send you a free copy. 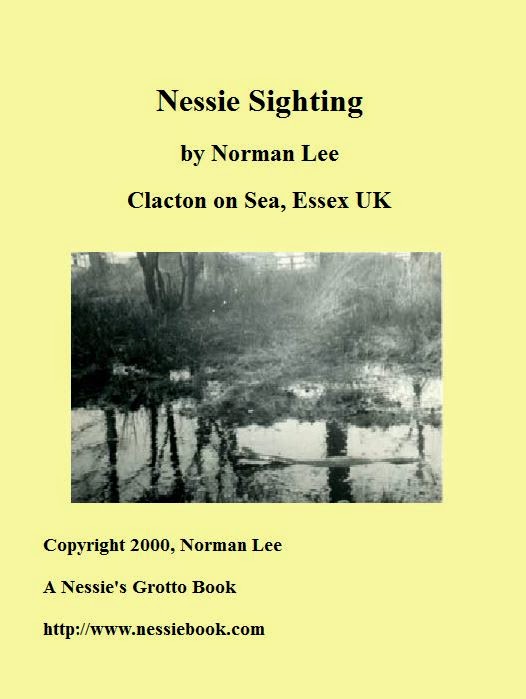 Norman takes us through his story of seeing a head and neck and the photograph he took. To my disappointment, the e-book does not publish this picture and Lois tells me that they were never given it. One can only guess where it is now, but from reading the text, his photo would appear to show the object in the act of submerging with the neck already underwater. Norman speaks of his "excitement" taking him longer to prepare the camera. It looks like a bit of "shock and awe" deprived us of a better picture.

Since he mentions the photo being seen by the LNIB and being sent back without the world hearing any more about it, I will assume it was not a game changer. The e-book also gives an insight into his personal dealings with the Loch Ness Investigation Bureau and Tim Dinsdale (misspelt "Dimsdale"). I note that Tim interviewed Norman with his tape recorder and an LNIB report form was filled out. So, there is extra information out there to check this ebook testimony against.

It is not clear whether Tim's cassette tape recording was for his own private research or done in an LNIB capacity. For now, I will assume the former and the tape now lies in his family's archives.

So, there you have it. Three e-books for your interest. I assume there are more of these non-paper items out there. If you know of any,  leave a comment below.