I showcased this classic sighting from 1936 in a previous article. You may think that would have been it but a comment submitted to that article recently has brought it back to life in more ways than one.

Marjory Moir passed away some years back but before then her account was recorded on audio tape back in the early 1980s by her granddaughter. The transcript of that conversation is given below as Mrs. Moir relives that exciting day fifty years previously.

The other fascinating thing about this new information is that one of the witnesses is still alive today and living in Scotland! Indeed, she had a second sighting of the creature, although it was not as spectacular as this famous account. She was the youngest of the party and is called "Ann" here to respect her anonymity.

The recounting of this story begins with some words from her granddaughter:

I am the granddaughter of Marjory Moir. She was one of the most sensible, down to earth people you could meet. She had a very interesting life, which included living and travelling in America and other far away places. She was intelligent and articulate and was absolutely not the kind of person that needed to invent stories to gain attention. She had many interesting tales to relate about her experiences and travels, of which the monster sighting was just one.

As several members of my family had seen the creature, it was simply common knowledge in our family that it did exist. It was a recurring topic of conversation over the years, and accounts were retold and discussed by all family members, with the details never changing.

A few years before my grandmother died, I asked her to tell me again about the time she saw the Loch Ness monster and recorded the conversation onto cassette. I still have the recording in my possession and it is six and half minutes long.

When this was recorded my grandmother was in her mid-eighties and a little forgetful, but nevertheless able to relate her experience very clearly.

I notice there appears to be some confusion about who was driving the car on the day of the 1936 sighting. As I mentioned, my grandmother was becoming forgetful in her eighties, and although she remembered all of the others who who were there, she forgot to mention Mrs Grant Shewglie on the cassette recording. So who was driving and who had to move the car to make way for the other vehicle is not totally clear, but probably the earlier accounts are more accurate as her memory was obviously fresher then. However the details about the sighting itself remained unchanged, also during the numerous retellings and discussions of the subject within our family over the years.
The four other people in her car that day in October 1936 were:-

1. Her sister Barbara, also referred to as Bab or Baba
2.
3. Her husband Jack's mother, 'Granny Moir'
4. A friend, Mrs Grant Shewglie who she forgets to name in this account.


Mrs. Moir now recounts her story. The event happened on the road north of Foyers. The picture below from 1951 gives an idea of the background to the story that day. The interviewer is designated as "I" and Mrs. Moir as "M". 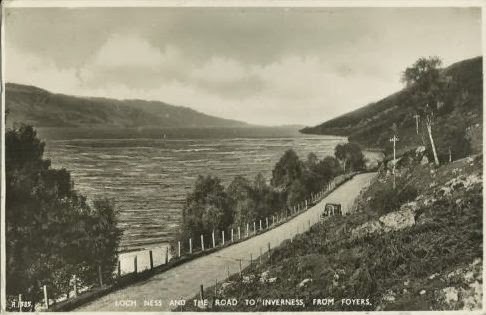 M: "Oh yes I did indeed. I got one of the best views ever got of it. We watched it for fourteen minutes."

I: "Tell me about that. When did it happen?"

M: "Well, oh what year was it? Before we came to Edinburgh. Bab and I were coming back from - we'd gone to Foyers, which is about fifteen miles up towards Loch Ness from Inverness - fifteen miles. We went out for afternoon tea and we had Granny Moir. Jack's mother was with us. There was myself and Barbara, Granny Moir and Ann. How many? How many people's that? Me and Baba and Granny Moir and - and em, Ann. Five of...four of us.

And we were coming - I was driving, and of course there was a part of the road that was very near the loch, and no trees between us and the loch, and - and eh, Baba said; "Oooh!" she said; "There's the Loch Ness monster." and I stopped the car. And sure enough here was this thing on the top of the waves. So I got - stopped the car - pulled the car into a sort of layby, and we went down to the edge of - of the loch, in amongst the pebbles, and we watched it. It would be about a third of the way across the loch.

At that particular place the loch would be about a mile and a half wide, and we went down to watch it, and it would be about a third of a mile from us. And it was a - it had three humps, a little hump and a big hump and a smaller hump, and a long neck with a head, you know. And we went down and we watched it. And it dipped - it kept dipping its head into the water and playing itself, and then all of a sudden it turned and fled - turned round away from us and went straight across the loch, and it made a terrific wave on the shore, and Ann had to get out of the way of the - of the - of the wave. It came up onto the shore.

And then it, it - you could see the top of its head or the top of the middle hump all the way across the loch to Drumnadrochit, and there it turned. It came straight back to where it was before and Ann was standing like this (gestures), scared of it. And it came right back to where it was originally and took up its position, but there were no humps on it this time, the back was straight. Previously the back had been three humps, but this time the back was straight but it still had the curved neck and dipping its head in the water.

And we watched it and watched it. And eventually there was a hoot, hoot, hooting on the road. It's a very narrow road, and somebody a - a baker's van or something was coming and I had to come up and move the car on. So by the time I came back from moving the car to let this other fellow past, it had disappeared. But it was a grand view of it. Three humps: a wee hump, a big hump and a little hump and a neck like that (gestures), and it would be about thirty feet long I should imagine. Nobody's ever discovered what it is."

"Oh yes, that was the Loch Ness monster. And I remember they (her grandparents) lived in a farm away up at the top of Dores. A farm called Urquhart."

M: "Lovely part of the country and eh, he (her father) used to be annoying the farm workers. It was quite a big farm, and my grandparents were good workers and it was a good farm. And he used to annoy the kids - the - the workmen, and my father said that - that they used to frighten him by saying that if they - if he didn't behave himself the em,...oh... 'something' would get him - the oh, the Gaelic name for the - for the monster - the Gaelic for a water horse, whatever that - I can't remember it unfortunately. But they said that if he didn't behave himself that the water horse would get him, using the Gaelic word which meant the monster. So the monster must have been there many, many years ago.

"Oh yes I've seen it. People don't believe me but I have seen it - watched it, stood on the shores and looked at it and saw it. And it was in television and I was on the radio about it too. They gave me a fiver for talking about it (laughs). Och, it's been a very interesting life you know."

I: "Yes I think so. You've only seen the monster once then?"

The Gaelic for "Water Horse" is "Each Uisge" and it is not surprising (to me) that old tales of this creature in Loch Ness were known to locals from the nineteenth century. So it is great to read this witness testimony coming back to us over the decades and also exciting to know that one witness still lives today.

You may have your own views on this story but it certainly continues to hold the status of "classic sighting" amongst believers in the Loch Ness Monster.